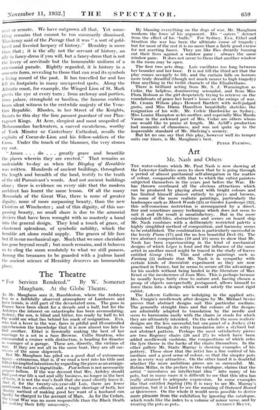 As Mr. Maugham sees it, Rambleston, where the Ardsleys live in a faithfully observed atmosphere of Landseers and lawn tennis, is still part of the devastated area. The guns in France have been silent for a decade and a half, but for the Ardsleys the interest on catastrophe has been accumulating. Sydney, the son, is blind and bitter, too ready by half to let the world see what lies behind his mask of resignation. Eva, who lost a lover in the war, faces in pitiful and ill-controlled apprehension the knowledge that it is now almost too late to find another. Ethel is heroically making the best of her marriage to a sot in a Sam Browne. Collie Stratton, who commanded a bruiser with distinction, is heading for disaster as manager of a garage. These are, directly, the victims of war. If they are not all in the same boat, they are all sur- vivors of the same shipwreck. But Mr. Maugbam has piled on a good deal of extraneous agm1Y--extraneous, that is if we read a text into his title and follow his implied intentions by regarding the piece as an arraign- ment of the nation's ingratitude. Post bellurn is not necessarily propter helium. • If the war decreed that Mrs. Ardsley should find post-war life a sad and silly business, no longer in the best of taste, it is not the war's fault that she must shortly leave it. And if, for the twenty-six-year-old Lois, there are fewer gentlemen thin ex-officers, and a tragic shortage of both, her i'h°ddY method of making good her want of a husband can Hardly be charged to the account of Mars. As for the Cedars, the Great War Was no more 'responsible than the Black Death formaki • 1

ng .their folly unsavoury. By blaming everything on the dogs of war, Mr. Maugham weakens the force of his argument. His outers " detract from the effect of his "bulls." For Sydney, Eva, Ethel and Stratton the war has been the ultimate cause of tragedy ; but for most of the rest it is no more than a fairly good excuse for not averting fiasco. They are like flies drearily buzzing out their lives against a window pane : always the same window pane. It does not occur to them that another window in the room may be open.

The first two acts. drag. • Lois vacillates too long between her bounder and her boor. It is not till the third act that the play conies savagely to life, and the curtain falls on horrors more truly dreadful (though not much nearer to high tragedy) than anything in the twilit charnels of the Elizabethans.

There is brilliant acting from Mr. S. J. Warmington as Cedar, the helpless, domineering sensualist, and from Miss Flora Robson as the girl desperately trying to retrieve on the roundabouts of peace her heart's losses on the swings of war. Mr. Cronin Wilson plays Howard Bartlett with well-judged gusto, and Miss Diana Hamilton beautifully sketches the resignation of his wife. Mr. Cedric Hardwicke as Sydney, Miss Louise Hampton as his mother, and especially Miss Marcia Vanne in the awkward part of Mrs. Cedar arc others whom one would like to praise at length. Mr. Aylift's production had moments of clumsiness, and was not quite up to the impeccable standard of Mr. Shelving's scenery.