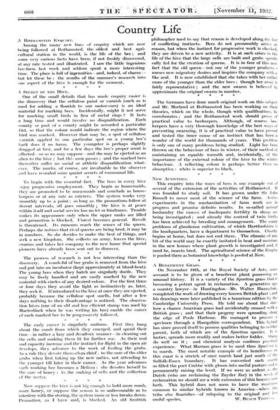 Now suppose the hive is not big enough to hold

more comb, more honey, or suppose the season is so unfavourable as to interfere with the storing, the system more or less breaks down. Promotion, as I have said, is blocked. An • old Scottish philosopher used to say that reason is developed along the line of conflicting instincts. Bees do not presumably arrive at reason, but when the instinct for progressive work is checked, they are driven to a new activity. It is at such crises in the life of the hive that the large cells are built and grubs speeiti- milly fed for the creation of queens.. It is. in face of this new. fact that the old queen—not one of the younger products–. nurses new migratory desires and inspires the company with a like zeal. It is now established that she takes with her rather more of the younger than the elder bees ; though her army is fairly representative ; and the new swarm is believed to approximate the original swarm in number. * * * *