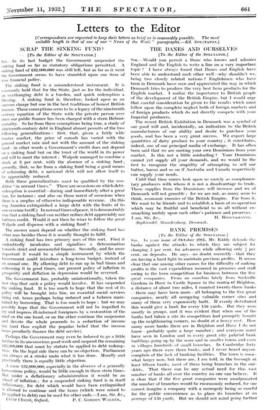 Page 13, 11 November 1932 — Letters to the Editor [Correspondents are requested to keep their
Close

Letters to the Editor [Correspondents are requested to keep their

letters as brief as is reasonably possible. The most suitable length is that of one of our " News of the Week " paragraphs.—Ed. Seccratoa.I

- [To the Editor of the SPECTATOR.] Sac,—In its last budget the Government suspended the sinking fund so far as statutory obligations permitted. A sinking fuiid of £32,000,000 was still left, but as far as it went the Government seems to have stumbled upon one item of wise financial policy.

The sinking fund is a misunderstood instrument. It is rommonly held that for the State, just as for the individual, an overhanging debt is a burden, and quick redemption a blessing. A sinking fund is, therefore, looked upon as an Onerous charge but one in the best traditions of honest British finance. These conceptions seem to be a legacy of the nineteenth century equation of the State with the private person ever since our public finance has been charged with a stern Hebraic morality. So far from these conceptions being true, a study of nineteenth-century debt in England almost permits of the two following generalizations : first, that, given a fairly wide trustee market, the price of consols has varied with the general market rate and not with the amount of the sinking fund--in other words a Government's credit does not depend on a sinking fund but on the trust of the world in its power and will to meet the interest ; Walpole managed to combine a stuck at 2 per cent. with the absence of a sinking fund secondly, that, so far from a sinking fund being a good means of redeeming debt, a national debt will not allow itself to he appreciably reduced.

Both these generalizations must be qualified by the con- dition "in normal times." There are occasions on which debt- redemption is essential—during and immediately after a great war, for instance ; and also on those rarest of occasions when there is a surplus of otherwise indisposable revenue. (In this way America extinguished a large debt with the fruits of its non-revenue tariff.) In normal times of peace, it is demonstrably true that a sinkingfund can neither reduce debt appreciably nor buttress credit. Would it not then be wiser to follow the great Walpole and dispense with a sinking fund ?

The answer must depend on whether the sinking fund has other uses b6ides those it is usually thought to fulfil.

A sinkini.fund has two primary uses of this sort. First it undoubtedly inculcates and signalizes a determination towards strict and unwasteful finance. Secondly, and far more important it would be a simple instrument by which the Government could introduce a long-term budget, instead of an annual one. By allowing debt to run up in bad times and redeeming it in good times, our present policy of inflation in Prosperity and deflation in depression would be reversed.

The Government has, probably unintentionally, taken the first step that such a policy would involve. It has suspended the sinking fund. It is too much to hope that the rest of its policy will be brought into line, no essential social services being cut, taxes perhaps being reduced and a balance main- tained by borrowing. That is too much to hope : but we may possibly hope that the Government will not be impelled to try and impress ill-informed foreigners by a restoration of the fund on the one hand, or on the other continue the suspension and devote the whole proceeds to a reduction of income tax (and thus exploit the popular belief that the income taxes peculiarly finance the debt service).

Perhaps the Government may even be induced to go a little further in its unconscious good work and suspend the remaining t32,000,000 that must by statute be applied to debt redemp- tion. On the legal side there can be no objection. Parliament can always at a stroke undo what it has done. Morally and Practically there is equally little objection.

A mere £32,000,000, especially in the absence of a generally harmonious policy, would be little enough in these stern times. lintunder a deflationary administration it would be an island of inflation ; for a suspended sinking fund is in itself inflationary, for debt which would have been extinguished is allowed to continue and the taxes (which. were raised to be applied to debt) can be used for other ends.—I am, Sir, &c.,