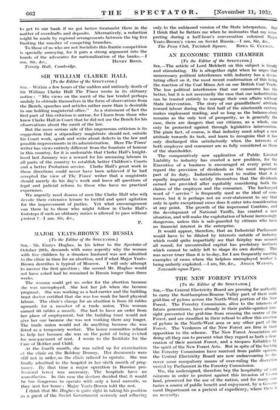 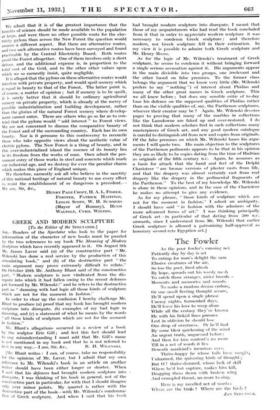 SIR,—The Central Electricity Board are pressing for authority to carry the Southampton-Bourne Valley part of their main grid-line of pylons across the North-West portion of the New Forest. The Forestry Commission, alive to the interests of future generations, have already in their public-spirited fore- sight prevented the grid-line from crossing the centre of the Forest, and are steadfast in their refusal to allow this erection of pylons in the North7West area or any other part of the Forest. The Verderers of the" New Forest are firm in their opposition to the scheme. The New Forest Association are doing all they can to prevent what they regard as bath a dese- cration of their ancient .Forest, and a. 'trespass fOrbidden by the spirit of the New Forest Acts. But in spite of the backing the Forestry Commission have received from public opinion, the Central Electricity Board are now endeavouring to dis- cover some compulsory means of over-ruling the discretion vested by Parliament in-the Forestry Commission. We, the undersigned, therefore beg the hospitality of your columns in order to protest against this invasion of Crown land, preserved for 'the use of the nation, and for many cen- turies a source of public benefit and enjoyment, by a Govern- ment Department on a pretext of expediency, where there is no necessity;

We admit that it is of the greatest importance that the benefits of science should be made available to the population at large, and were there no other possible route for the elec- tricity pylons than across the New Forest the question would assume a different aspect. But there are alternative routes, and two such alternative routes have been surveyed and found practicable by the Central Electricity Board. Both routes avoid the Forest altogether. One of them involves only a short detour, and the additional expense is, in proportion to the total cost of the Grid, and to the other other values upon which we so earnestly insist, quite negligible.

It is alleged that the pylons on these alternative routes would interfere with private property, and would spoil scenery which is equal in beauty to that of the Forest. The latter point is, of course, a matter of opinion ; but if scenery is to be spoilt, it is surely better that it should be ordinary agricultural scenery on private property, which is already at the mercy of possible industrialization and building development, rather than the glories of the natural Forest scenery where develop- ment cannot enter. There are others who go so far as to con- tend that the pylons would " add interest " to Forest views. We are not concerned to discuss the comparative beauty of the Forest and of the surrounding country. Each has its own beauty. Nor is it germane to this controversy to reconcile those who take opposite views about the aesthetic value of electric pylons. The New Forest is a thing of beauty, and in this over-industrialized island the essence of its beauty lies in its freedom from the works of man. Once admit the per- manent entry of those works in steel and concrete which mark our industrial age, and we destroy for ever the peculiar charm which makes this piece of England unique.

We therefore, earnestly ask all who believe in the sanctity of this national heritage of natural beauty to use every effort to resist the establishment of so dangerous a precedent.— We are, Sir, &c.,