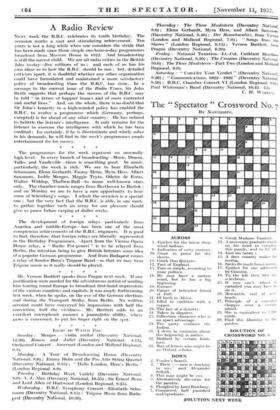 Mr. Vernon Bartlett speaks front Prague next week. If any

justification were needed for the adventurous notion of sending him touring round Europe to broadcast first-hand impressions of the various countries and capitals, it was amply forthcoming last week, when he spoke, on the eve of the German elections and during the Transport Strike, from Berlin. No written account could have conveyed his impressions with half the conviction, half the vividness. Mr. Bartlett adds to an excellent microphonie manner a journalistic ability, where news is concerned, to put his finger right on the spot.