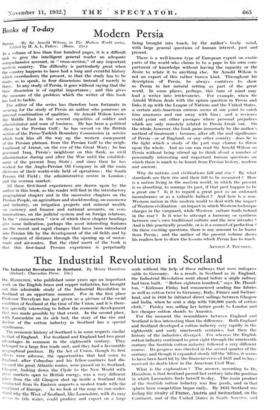 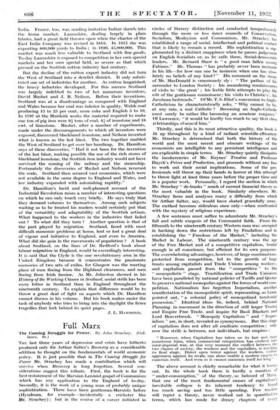 The Industrial Revolution in Scotland

The Industrial Revolution in Scotland. By Henry Hamilton (Oxford : Clarendon Press. 15s.) Da. HcUILzON, who published some years ago an important work on the English brass and copper industries, has brought out this admirable study of the Industrial Revolution in Scotland at an opportune moment. For in the first place Professor Trevelyan has just given us a picture of the social condition of Scotland at the time of the Union, and it is there- fore specially interesting to follow the economic development that was made possible by that event. In the second place, with Lancashire on its sick bed, the story of the rise and decline of the cotton industry in Scotland has a special significance.

The economic history of Scotland is in some respects similar to that of England. For Scotland and England had two great advantages in common in the eighteenth century. They belonged to a large free trade unit, and they had a favourable geographical position. By the Act of Union, though its first effects were adverse, the. opportunities that had cone to England, after Columbus - and his fellow-mariners had dis- vovcred the great Atlanticroutes, were passed on to Scotland. Idasgow, looking denin- the Clyde to the New World with great markets open to British energy, was a very different place from the, old Glasgow shut up inside a Scotland that conducted froni its Eastern seaports a modest trade with the continent of Europe. -As we look at the map we can under- qand why the WeSt of Scotland, like Lancashire, with its easy aevess to tide water, Could produce and export on a large

scale without the help of those railways that were indispen. sable to Germany. As a result, in Scotland as in England, the Industrial Revolution went ahead before a single railway had been built. " Before eighteen hundred," says Dr. Hamil- ton, " Kirkman Finlay had commenced sending fine fabrics as well as cotton twist to Germany, Italy, France and Switzer- land, and in 1816 he initiated direct sailings between Glasgow and India, when he sent a ship with 720,000 yards of cotton cloth." Paisley was selling her better goods to London and her cheaper cotton shawls to America.

For the moment the resemblance between England and Scotland is less interesting than the difference. Both England and Scotland developed a cotton industry very rapidly in the eighteenth and early nineteenth centuries, but then the history of the industries diverged. For whereas the English cotton industry continued to grow right through the nineteenth century the Scottish cotton industry followed a very different course. Its progress was checked in the second quarter of the century, and though it expanded slowly till the 'fifties, it seems to have been hard hit by the financial crisis of 1857 and to haw received its death-blow in the American Civil War.

What is the explanation ? The answer, according to Dr. Hamilton, is that Scotland passed last century into the position in which Lancashire finds herself to-day. The main product of the Scottish cotton industry was fine goods, and in that sphere keen competition began early. By 1833 Scotland was feeling the rivalry of France, Austria and Switzerland, on the Continent, and of the United States in South America, and India. France, too, was sending imitation Indian shawls into the home market. Lancashire, dealing largely in plain fabrics, had a great field thrown open when the charter of the East India Company was revised in 1813. In. 1815 she was ex-porting 800,000 yards to India ; in 1830, 45,000,000. This market was much less valuable to Scotland with fine goods. To-day Lancashire is exposed to competition in her own special markets and her own special field, as severe as that which pressed on the Scottish cotton industry last century.

But the decline of the cotton export industry did not turn the West of Scotland into a derelict district. It only substi- tuted one set of industries for another. As cotton languished, the heavy industries developed. For this success Scotland was largely indebted to two of her numerous inventors, David Mushet and J. B. Neilson. Before their inventions, Scotland was at a disadvantage as compared with England and Wales because her coal was inferior in quality, Welsh coal producing 15 to 25 per cent, more coke and English 5 to 10. In 1797 at. the Muirkirk works the material required to make one ton of pig iron were 9i tons of coal, 41 of ironstone and 18 cwt. of limestone. Mushet, after a number of experiments, made under the discouragements to which all inventors were exposed, discovered blackband ironstone, and Neilson invented what is known as the hot blast. The two together enabled the West of Scotland to get over her handicap. Dr. Hamilton says of these discoveries, " Had it not been for the invention of the hot blast, making possible the use of the rich stores of blackband ironstone, the Scottish iron industry would not have survived the coming of the railway and the steamship. Fortunately the discoveries of Mushet and Neilson reversed the scale. Scotland then secured vast .economies, which were not available in the same degree to England and Wales, and her industry expanded with astonishing rapidity."

Dr. Hamilton's lucid and well-planned account of the Industrial Revolution raises a number of interesting questions on which he can only touch very briefly. He says truly that they demand volumes to themselves. Among such subjects waiting so to be treated his readers would certainly put that of the versatility and adaptability of the Scottish artisan. What happened to the workers in the industries that faded out ? To what did they turn ? Another question is that of the part played by migration. Scotland, faced with most difficult economic problems at home, lent or lost a great deal of vigour and initiative to England, and even to America. What did she gain in the movements of population ? A book about Scotland, on the lines of Dr. Redford's book about labour migration in England, would be exceedingly interesting. It is said that the Clyde is the one revolutionary area in the United Kingdom because it concentrates the passionate memories of two sets of exiles, for Glasgow was the meeting place of men fleeing from the Highland clearances, and men fleeing from Irish famine. As Mr. Johnston showed in his History of the Working Classes in Scotland, social strife has been- more bitter in Scotland than in England throughout the nineteenth century. To explain that difference would be to throw a great deal of light on aspects which Dr. Hamilton cannot discuss in his volume. But his book makes easier the task of anybody who tries to bring into the daylight the fierce tragedies that lurk behind its quiet pages.