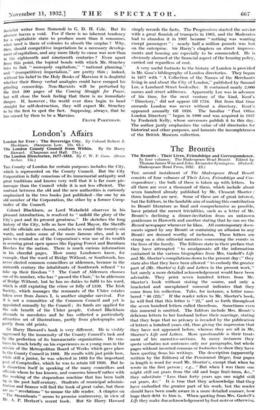 London for Ever : The Sovereign City. By Colonel Robert J. Blackbam. (Sampson Low. 12s. 6d. ) The London County Council from Within. By Sir Harry Haward. (Chapman and Hall. 21s.) The London Directories, 1677-1855. By C. W. F. Goss. (Denis Archer. 15s.) THE County of London for certain purposes includes the City, which is represented on the County Council. But the City

Corporation is fully conscious of its immemorial antiquity and great traditions and knows very well that it is far more pic- turesque than the Council while it is not less efficient. The contrast between the old and the new authorities is curiously emphasized in the two books just published—the one by an old member of the Corporation, the other by a former Comp- troller of the Council.

Colonel Blackham, as Lord Wakefield observes in his pleasant introduction, is resolved to " unfold the glory of the City's past and its present greatness." He sketches the long history of the City, tells us how the Lord Mayor, the Sheriffs and the officials are chosen, conducts us round the twenty-six wards, and notes some of the more famous sites, and is at pains to remind us of the Corporation's wise use of its wealth in securing great open spaces like Epping Forest and Burnham Beeches for the nation. There is much curious information in his cheerful pages. How many Londoners know, for example, that the ward of Bridge Without, or Southwark, has never elected common councillors or aldermen, because in the sixteenth century the inhabitants of Southwark refused " to take up their freedom " ? The Court of Aldermen chooses one of its number, who has " passed the Chair," to be alderman of Bridge Without, but he has no duties to fulfil to his ward, which is still expiating the crime or folly of 1550. The Irish Society, which manages the remnants of the Ulster estates taken over from James I, is another singular survival. For it is not a committee of the Common Council and yet is appointed annually by the Council ; its funds are applied for the sole benefit of the Ulster people. Colonel Blackham abounds in anecdotes and he has collected a particularly attractive set of illustrations, partly from photographs and Partly from old prints.

Sir Harry Haward's book is very different. He is visibly oppressed by the immensity of the County Council's task and by the perfection of its bureaucratic organization. He ven- tures to touch briefly on his experiences as a young man in the service of the Metropolitan Board of Works which gave place to the County Council in 1888. He recalls with just pride how, while still a junior, he was selected in 1893 for the important post of Comptroller, which he was to retain till 1920. But he is discretion itself in speaking of the many councillors and Officials whom he has known, and concerns himself rather with the working of the stupendous machine that has been built

up in the past half-century. Students of municipal adminis- tration and finance will find the book of great value, but there are no " revelations-"'to amuse the idle reader. A chapter on The Steamboats " seems to promise controversy, in view of Mr. A. P. Herbert's recent book. But Sir Harry Haward

simply records the facts. The Progressives started the service with a great flourish of trumpets in 1905, and the Moderates had to abandon it in 1907 because " nothing was wanting except passengers " ; nearly half a million pounds was lost on the enterprise. Sir Harry's chapters on street improve- ments and housing are especially to be commended. He is obviously alarmed at the financial aspect of the housing policy, carried out regardless of cost.

A very useful footnote to the history of London is provided in Mr. Goss's bibliography of London directories. They began in 1677 with " A Collection of the Names of the Merchants living in and about the City of London," published by Samuel Lee, a Lombard Street bookseller. It contained nearly 2,000 names and street addresses. Apparently Lee was in advance of his time, for the next venture of the kind, Kent's " Directory," did not appear till 1784. But from that time onwards London was never without a directory. Kent's appeared annually till 1828. The familiar " Post Office London Directory " began in 1800 and was acquired in 1837 by Frederick Kelly, whose successors publish it to this day. The author justly emphasizes the value of old directories for historieal and other purposes, and laments the incompleteness of the British Museum collection.