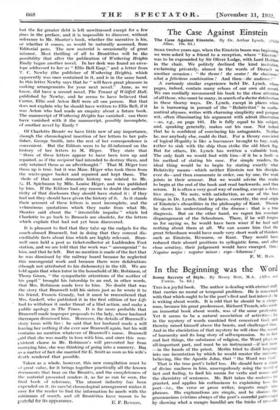 The Case - Against Einstein

The Case Against Einstein. By pr. Arthur Lynch. (Philip Allan. 10s. 6d.) SOME twelve years ago, when the Einstein boom was beginning. we were asked by a friend to a reception, where " Einstein" was to be expounded by Sir Oliver Lodge, with Lord Haldane in the chair. We politely declined the kind invitation, exclaiming privately, almost in the words of Disraeli on another occasion : " the theme! the orator ! . the chairino; what a felicitous combination ! And then—the audience ."

A curiously similar experience befel Dr. Lynch, who pages, indeed, contain many echoes of our own old record. We can cordially recommend his book to the close attention of all those, who must be many, in search of a doctor dubitantium in these thorny ways. Dr. Lynch, except in places where he is burrowing in pursuit of the "Relativitist" in mathe- matical abysses, writes with charming simplicity and pungent wit, often illuminating his argument with adroit illustration e.g., on page 161. He is fully equal to his subject, and, speaking generally, makes out his case. Not indeed that he is confident of convincing his antagonists. Neither he, nor anybody else, could do that. For a theory convicted of logical illegality is like a buccaneer brought to hay. ready rather to sink with the ship than strike the old black flag. But for others, Dr. Lynch has written a valuable book. The only fault we would find with him—if it be a fault—is his method of stating his case. , For simple readers, the ideal thing would be to begin by stating exactly what Relativity means—which neither Einstein nor his disciples ever do—and then enumerate in order, one by one, the weak joints in their armour. But we would advise the reader to begin at the end of the book and read backwards, and then return. It is often a very good way of reading, except a deter. tive story. We note, with satisfaction, as one of the best things in Dr. Lynch, that he places, correctly, the real origin of Einstein's absurdities in the philosophy of Kant. Therein he shows his understanding of the disease : that is a true diagnosis. But on the other hand, we regret his constant disparagement of the Schoolmen. There, if he will forgive us for saying so, he would have been wiser if he had said nothing about them at all. We can assure him that the great Schoolmen would have made very short work of thinkers such as Einstein, Riemann, or Kant. They would have reduced their absurd positions to syllogistic form, and after close scrutiny, their judgement would have emerged, thus : Negatur major : negatur minor : ergo—bibarnus ! F. W. BAIN.