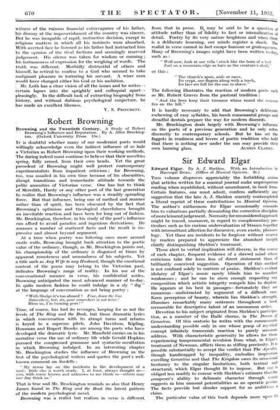 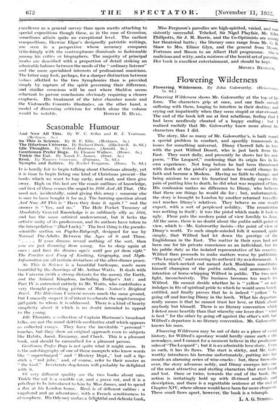 THIS volume disproves appreciably the forbidding axiom that articles written for a musical journal make unprosperous reading when republished, without amendment, in book form.

Certain features, one must admit, confirm sufficiently any suggestion that the late A. J. Sheldon scarcely contemplated a literal reprint of these contributions to Musical Opinion.

The author's enthusiasm for Elgar occasionally commits him to valuations partially demanding the corrective discipline of more leisured judgement. Necessity for reconsidered approach

might be traced, moreover, in regard to complementary par- ticulars such as his curious undervaluation of Strauss together

with intermittent affection for discursive, even exotic, phraseo- logy. Yet these are incidents to be forgiven without reserve by readers prepared to appreciate the abundant insight chiefly distinguishing Sheldon's treatment.

Those alert to verbal implication will discern, in the course of each chapter, frequent evidence of a shrewd mind whose criticisms take the form less of direct statement than of brilliantly conceived suggestion. Operation of this method is not confined solely to matters of praise. Sheldon's evident idolatry of Elgar's music rarely blinds him to manifest weaknesses ; and he can be stern enough respecting any composition which artistic integrity compels him to deplore.

He appears at his best in passages—fortunately they are numerous—undistracted by argument of a difficult case. Keen perception of beauty, wherein lies Sheldon's strength, illumines remarkably many sentences throughout a book memorable for descriptive talent of• an uncommon order.

Devotion to his subject originated from Sheldon's participa- tion, as a member of the Halle chorus, in The Dream of Gerontius. Of this oratorio he writes with the consummate understanding possible only in one whose grasp of mystical concept infinitely transcends reaction to purely sensuous address. With characteristic generosity he allows for those experiencing temperamental revulsion from what, in Elgar's treatment of Newman, afflicts them as stifling preciosity. It is possible substantially to accept the verdict that The Apostles, though handicapped by inequality, embodies inspiration excelling Gerontius and that The Kingdom owes its occasional hesitancy to the singular limitations, both textual and structural, which Elgar thought fit to impose. But one is

suggests in him unusual potentialities as an operatic genius. The facts provide but slender support for so ambitious a claim.

rxcellence as a general survey than upon merits attaching to special expositions though these, as in the case of Gerontius, sometimes attain quite an - exceptional level. The earliest 'compositions, likewise Elgar's designedly patriotic writings, ' arc seen in a perspective whose accuracy compares 'refreshingly refreshingly with the contemptuous dismissals so fashionable among his critics or biographers. The majority of principal

Avorks are described with a proportion of detail striking an admirable balance between the needs of the " ordinary listener" and the more specialized interests of professional musicians. The latter may look, perhaps, for a sharper distinction between attics allotted to the two Symphonies than is provided ..imply by capture of the spirit governing their difference, and similar occasions will be met where Sheldon seems .reluctant to pursue conclusions obviously requiring a clearer emphasis. His treatment of the later chamber music and the Violoncello Concerto illustrates, on the other hand, a iliodel of discerning criticism for which alone the volume