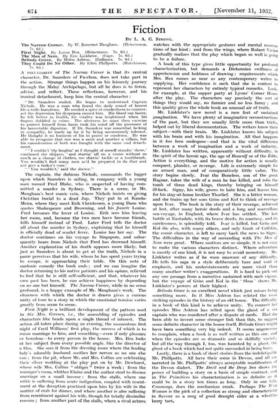 A PECULIARITY of The Narrow Corner is that its central character, Dr. Saunders of Fu-chou, does not take part in the action. Strange things happen on his leisurely journey through the Malay Archipelago, bid all he does is to listen, advise, and reflect. These reflections, however, and his ironical detachment, keep him the central character :

" Dr. Saunders smiled. He began to understand Captain Nichols. He was a man who found the daily round of honest life a trifle humdrum. He needed a spice of crookedness to counter- act the depression his dyspepsia caused him. His blood ran faster, he felt better in health, his vitality was heightened when his fingers dabbled in crime. The alertness he must then exercise to protect himself from harm took his mind off the processes of his lamentable digestion. If Dr. Saunders was somewhat lacking in sympathy, he made up for it by being uncommonly tolerant. He thought it no business of his to praise or condemn. He was able to recognize that one was a saint and another a villain, but his consideration of both was fraught with the same cool detach- ment.

" I couldn't-'elp laughin' as I thought of meself -standin' there,' continued the skipper, and startin' off on a cruise without so much as a change of clothes, me shavin' tackle or a toothbrush. You wouldn't find many men as'd be prepared to do that and not give a tinker's cuss.'

The captain, the dubious Nichols, commands the lugger upon which Saunders is sailing, in company with a young man named Fred Blake, who is suspected of having com- mitted a murder • in Sydney. There is a scene, in Mr. Maugham's best comic vein, where Nichols insists on giving Christian burial to a dead Jap. They put in at Kanda- Meira, where they meet Erik Christessen, a young Dane who quotes Shakespeare and Browning, and his fiancée Louise. Fred becomes the lover of Louise. Erik sees him leaving her room, and, because the two men have become friends, kills himself instead of Fred. Later Fred- tells the doctor all about the murder in Sydney, explaining that he himself is officially dead of scarlet fever. Louise has her say. The doctor continues on his voyage to Singapore, and subse- quently hears from Nichols that Fred has drowned himself. Another explanation of his death appears more likely, but just as Saunders is about to get at the truth, Nichols in a panic perceives that his wife, whom he has spent years trying to escape, is approaching their table. On this note of sardonic comedy the book ends ; and we can imagine the doctor returning to his native patients and his opium, relieved to find that he is still self-sufficient, and that, whatever his own past has been, he can achieve happiness by depending on no one but himself. The Narrow Corner, while in no sense profound, is a happy example of Mr. Maugham's work. The clearness with which the doctor is drawn gives a curious unity of tone to a story in which the emotional tension varies greatly from scene to scene.

First Night is a brilliant development of the pattern used in Six Mrs. Greenes, i.e., the assembling of episodes and characters like beads upon a single thread of interest. The action all takes place during an evening, the momentous first night of Cecil Williams' first play, the success of which is to mean marriage to him, and something—even if only pleasure or boredom—to every person in the house. Mrs. Rea looks at her subject from every possible angle, like the director of a film. She sees it from the dressing room where the leading lady's adorable husband -soothes her nerves as no one else can ; from the pit, where Mr. and Mrs. Collins are celebrating their silver wedding at the play put on by Mr. Dewhurst, whose wife Mrs. Collins " obliges " twice a week ; from the manager's room, whither Elaine and the author steal to discuss marriage on a small income ; from the stalls, where one critic is suffering from acute indigestion, coupled with resent- ment at the deception practised upon him by his wife in the matter of crab for dinner, and where another is also suffering from resentment against his wife, though for totally dissimilar reasons ; from another part of the stalls, where a rival actress

watches with the appropriate gestures and mental reserva. tions of her kind ; and from the wings, where Robert Vivian gradually realizes that the play which began so well is going to be a failure.

A book of this type gives little opportunity for profound characterization, but demands a Dickensian swiftness of apprehension and boldness of drawing ; requirements which Mrs. Rea comes as near as any contemporary writer to supplying. Her confidence is such that she is content to represent her characters by entirely typical remarks. Look, for example, at the supper party at Lyons' Corner House after the play. The characters say precisely the sort of things they would say, no funnier and no Iess funny ; and this quality gives the whole book an unusual air of truth.

Mr. Linklater's new novel is a rare feat of sustained imagination. We have plenty of imaginative reconstructions of the past, but they are usually little more than tricks, helped out by liberal documentation. The writers know their subject—with their brain. Mr. Linklater knows his subject with his brain and with his imagination. All that happens in it has been undergone—and that is the vital difference between a work of imagination and a work of industry. Mr. Linklater has written, apparently without difficulty, in the spirit of the heroic age, the age of Beowulf or of the Edda. Action is everything, and the motive for action is usually conquest, plunder, or revenge. Life is extremely simple for an armed man, and of comparatively little value. The story begins slowly. Ivar the Boneless, son of the great Ragnar, takes the wife of a man he has killed, and robs the tomb of three dead kings, thereby bringing on himself ill-luck. Signy, his wife, grows to hate him, and leaves him for his stay-at-home brother Thorlief. She is a bitter woman, and she trains up her sons Grim and Kol to think of revenge upon Ivar. The book is the story of their revenge, achieved at last, after many heroic deeds and a long and marvellous sea-voyage, in England, where Ivar has settled. The last battle at Eastadale, with its brave deeds, its courtesy, and its carelessness, is splendidly told. Ivar is killed, but Grim and Kol die also, with many others, and only Gauk of Calfskin, the comic character, is left to carry back the news to Signy. The difficulties in the way of succeeding with The Men of Ness were great. Where motives are so simple, it is not easy to make the various characters distinct. Where adventure is mostly of one kind, it is not easy to avoid monotony. Mr. Linklater writes as if he were unaware of any difficulty. He tells his saga in a style deliberately bare and void of emphasis, and his understatements are more vivid than many another writer's exaggerations. it is hard to pick out any one passage from a narrative sustained with such vigour, but the voyage of Grim and Kol in the Skua ' shows Mr. Linklater's powers at their highest.

Belinda Grove is an excellent novel which just misses being something more. In it Miss Ashton has related the most striking episodes in the history of an old house. The difficulty in a book of this kind is to achieve unity. To connect her episodes Miss Ashton has relied upon - the ghost of a sea captain who was murdered after a dispute at cards. Had she been able to invent some stronger link than this, to suggest some definite character in the house itself, Belinda Grove might have been something very big indeed. It seems ungenerous to complain, when a book is as well written as this one, and when the episodes are so dramatic and so skilfully varied ; but all the way through I, too, was haunted by a ghost, the ghost of a boOk which had not quite Succeeded in being born.

Lastly, there is a book of short stories from the indefatigable Mr. Phillpotts. All have their scene in Devon, and all are narrated in Mr. Phillpotts' always acceptable modification of the Devon dialect. The Devil and the Deep Sea shows his power of building a story on a basis of simple contrast, and in The Primitives his characterization is as definite as it could be in a story ten times as long. Only in one tale, Crossways, does the mechanism creak. Perhaps The Wise Woman is the pick of a collection as strong and characteristic in flavour as a mug of good draught cider or a whortle- berry tart.