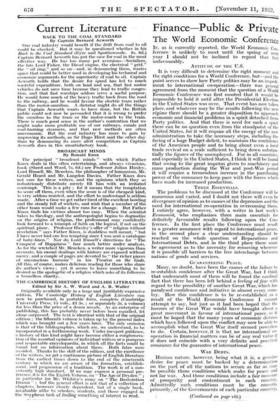 ATTITUDE OF THE U.S.

It is very difficult to determine the right moment and the right conditions for a World Conference, but—and the point serves to show how Party politics may be an impedi. ment to international ca-operation—there was general agreement from the moment that the question of a World Economic Conference was first mooted that it would be impossible to hold it until after the Presidential Election in the United. States was over. That event has now taken place, and whatever may be the results following the new regime there should be a greater disposition to approach economic and financial problems in a spirit detached from Party politics. And that there is need for such a spirit there can be no question even from the standpoint of the United States, for it will require all the energy of the new administration to take the necessary steps, including the facing of a huge Budget deficit, to maintain the confidence of the American people and to bring about even a local trade revival on a scale sufficient to bring down substan- tially the figures of the unemployed. For in all countries, and especially in the United States, I think it will be found that owing to the great impetus given to machinery and mass production during the War and post-War period it will require a tremendous increase in the purchasing power of the consumer to keep pace with the forces which have made for increased production.