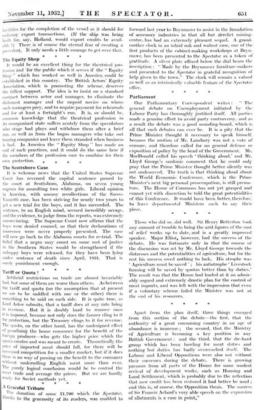 an excellent thing for the theatrical pro- fession had for the public which it serves if the " Equity Shop " which has 'worked so well in America, could be established in this country. The British Actors' Equity Association, which is promoting the scheme, deserves the fullest support. The idea is to insist on a standard contract between actor and manager, to eliminate the dishonest manager and the unpaid novice on whom such managers prey, and to require payment for rehearsals and for at least a fortnight's run. It is, or should be, common knowledge that the theatrical profession in its unorganized state suffers acutely from the speculators who stage bad plays and withdraw them after a brief run, as well as from the bogus managers who take out touring companies and leave them stranded when business is bad. hi America the " Equity Shop " has made an end of such practices, and it could do the same here if the members of the profession care to combine for their own protection. *