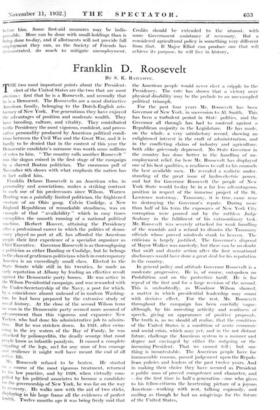 two most important points about the President- elect of the United States are the two that are most obvious : first that he is a Roosevelt, and secondly that he is a Democrat. The Roosevelts are a most distinctive American family, belonging to the Dutch-English aris- tocracy of New York. For generations they have enjoyed the advantages of position and moderate wealth. They hare breeding, culture, and vitality. They contributed to the Presidency the most vigorous, confident, and provo- cative personality produced by American political condi- tions between the Civil War and the Great War, and it is hardly to be denied that in the contest of this year the Democratic candidate's surname was worth some millions of votes to him. " The country calls another Roosevelt " was the slogan coined in the first stage of the campaign hr a shrewd Boston politician. The enormous poll of November 8th shows with what emphasis the nation has in fact called him.

Franklin Delano Roosevelt is an American who, in personality and associations, makes a striking contrast to each one of his predecessors since Wilson. Warren Harding was a painfully limited politician, the frightened creature of an Ohio gang. Calvin Coolidge, a New England Republican of remarkable steadiness, was an example of that " " which in easy times exemplifies the smooth running of a national political machine. Herbert Hoover, attaining the Presidency after a professional career in which the politics of demo- cracy played no part at all, has afforded the American people their first experience of a specialist organizer as Chief Executive. Governor Roosevelt is as thoroughgoing it politician as either Harding or Coolidge, but lie belongs to the class of gentlemen-politicians which in contemporary America is an exceedingly small class. Elected to the State Senate while still in his twenties, he made an early reputation at Albany by leiding an effective revolt against the Democratic party bosses. He was active in the Wilson Presidential campaign, and was rewarded with the Under-Secretaryship of the Navy, a post for which, by a coincidence almost unheard of in modern Washing- ton. he had been prepared by the extensive study of naval history. At the close of the second Wilson term ao man in the Democratic party seemed more assured of advancement than this vigorous and expansive New Yorker, who had done his administrative job to admira- tion. But he was stricken down. In 1921, after swim- ming in the icy *waters of the Bay of Fundy, lie was attacked by poliomyelitis, the deadly scourge that most people know as infantile paralysis. It caused a complete ('rippling of the legs, and for any man of less courage and resilience it might well have meant the end of all active life.

Mr. Roosevelt refused to be beaten. He started "li a course of the most rigorous treatment, returned to his law practice, and by 1928, when virtually com- pelled by his political associates to. become a candidate for the governorship of New York, he was far on the way to recovery. - He walks now with the aid of two sticks, displaying in his large frame all the evidences of perfect Twelve months ago it was being freely said that the American people would never elect a cripple to the Presidency. The vote has shown that a 'victory ovcr physical disability may be the prelude to an unexampled political triumph.

For the past four years Mr. Roosevelt has been Governor of New York, in succession to Al. Smith. This has been a turbulent period in State politics, and the Governor all through has had to contend against a. Republican majority in the Legislature. He has made. on the whole, a very satisfactory record, showing an enlightened interest in the craft of administration, and in the conflicting claims of industry and agriculture. both alike grievously depressed. No State Governor in the country has done better in the handling of un- employment relief, for here Mr. Roosevelt has displayed one of his best qualities, a readiness to call to his counsels the best available men. He revealed a realistic under- standing of the great issue of hydro-electric power, and but for Governor Roosevelt the people of New York State would to-day be in a far less advantageous position in respect of the immense project of the St. Lawrence waterway. Tammany, it is true, came near to destroying the Governor's repute. During more than half of his term the exposures of New York City corruption were poured out by the ruthless Judge Seabury in the fulfilment of his extraordinary task. Mr. Roosevelt was severely attacked for weak handling of the scandals and a refusal to dismiss the Tammany officials whose proved misdeeds stank to heaven. The criticism is largely justified. The Governor's disposal of Mayor Walker was masterly, but there can be no doubt. that swift and drastic action after the first sensational disclosures would have done a great deal for his reputation in the country.

In general policy and attitude Governor Roosevelt is a moderate progressive. He is, of course, outspoken ott Prohibition and on the protective tariff. He is for repeal of the first and for a large revision of the second. This is undoubtedly, as Woodrow Wilson showed, a matter in which presidential leadership may count with decisive effect. For the rest, Mr. Roosevelt; throughout the campaign has been carefully vague. although, by his unresting activity and readiness of speech, giving an appearance of positive proposals. The truth is, as we should all realize, that the condition of the United States is a condition of acute economic and social crisis, which may vet, and in the not distant. future, challenge the American system in a manner and degree not envisaged by either the outgoing or the incoming President. That we cannot tell ; but one thing is incontestable. The American people have for innumerable reasons, passed judgement upon the Repub- lican policies and leaders of the past twelve years. And in making their choice they have secured as President a public man of proved competence and character, and —for the first time in half a generation—one who gives to his fellow-citizens the heartening picture of a joyous American—working with zest, talking copiously, and smiling as though he had no misgivings for the future of the United States.