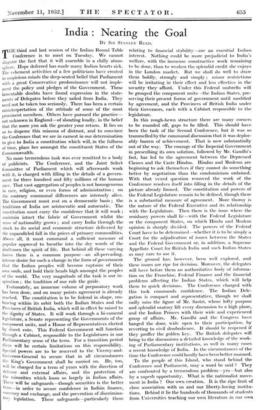 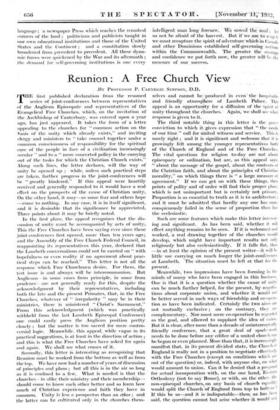 THE third and last session of the Indian Round Table Conference is to meet on Tuesday. We cannot disguise the fact that it will assemble in a chilly atmo- sphere. Hope deferred has made many Indian hearts sick. The vehement activities of a few politicians have created M suspicious minds the deep-seated belief that Parliament with a great Conservative predominance will not imple- ment the policy and pledges of the Government. These lamentable doubts have found expression in the state- ments of Delegates before they sailed from India. They need not be taken too seriously. There has been a certain misinterpretation of the attitude of some of the most prominent members. Others have pursued the practice— not unknown in England—of shouting loudly, in the belief that the more you ask the greater your return. It lies on us to disperse this miasma of distrust, and to convince the Conference that we are in earnest in our. determination. to give to India a constitution which will, in the fullness of time, place her amongst the constituent States of the Commonwealth.

No more tremendous task was ever remitted to a body of publicists. The Conference, and the Joint Select Committee of Parliament which will afterwards work with it, is charged with filling in the details of a govern- ment for three hundred and fifty millions of the human race. That vast aggregation of peoples is not homogeneous in race, religion, or even forms of administration ; on the contrary communal differences are intensely alive. The Government must rest on a democratic basis ; the traditions of India are aristocratic and autocratic. The constitution must carry the confidence that it will work ; maintain intact the fabric of Government whilst the sense of nationality grows ; and carry India through the shock to its social and economic structure delivered by the unparalleled fall in the prices of primary commodities. Above all, it must command a sufficient measure of popular approval to breathe into the dry words of the draftsmen the spirit of life. But behind all these varying forces there is a common purpose—an all-pervading, intense desire for such a change in the form of government that the Indian peoples will become captains of their own souls, and' hold their heads high amongst the peoples of the world. The very magnitude of the task is our in- spiration ; the tradition of our rule the guide.

Fortunately, an immense volume of preparatory work has been done, and on many points agreement is already reached. The constitution is to be federal in shape, em- bracing within its orbit both the Indian States and the Provinces of British India, which will in effect be raised to the dignity of States. It will work through a bi-cameral legislature, a Senate representing the Governments of the component units, and a House of Representatives elected by direct vote. This Federal Government will function through a Cabinet, responsible to the Legislatures in our Parliamentary sense of the term. For a transition period there will be certain limitations on this responsibility. Special -powers are to be reserved to the Viceroy-and- Governor-General to secure that in all circumstances the King's Govermnent shall be carried on. He, too, will be charged for a term of years with the direction of defence and external affairs, and the protection of the minorities which loom so largely in Indian affairs. There will be safeguards—though securities is the better term—in order to secure confidence in Indilin finance, currency and exchange, and the prevention of discrimina- tory legislation. These safeguards—particularly those relating to financial stability—are an essential Indian interest. Nothing could be more prejudicial to India's welfare, with the immense constructive work remaining to be done, than to weaken the splendid credit she enjoys in the London market. But we shall do well to draw them boldly, strongly and simply ; minor restrictions will be irritating in their effect and less effective in the security they- afford. Under this Federal umbrella will be grouped the component units—the Indian States, pre-i serving their present forms of government until modified by agreement, and the Provinces of British India under their Governors, each with a Cabinet responsible to the legislature.

In this rough-hewn structure there are many corners to be rounded off, gaps to be filled. This should have been the task of the Second Conference, but it was so trammelled by the communal discussion that it was deplor- ably barren of achievement. That is now substantially out of the way. The courage of the Imperial Government in prescribing its own solution, followed by Mr. Gandhi's fast, has led to the agreement between the Depressed Classes and the Caste Hindus. Hindus and Moslems are beginning to ask themselves if they cannot do something better by negotiation than the condominium ordained. With that vexed question removed the work of the Conference resolves itself into filling in the details of the picture already limned. The constitution and powers of the Federal Legislature remain to be defined, though there is a substantial measure of agreement. More thorny is the nature of the Federal Executive and its relationship with the Legislature. Then there is the issue where the residuary powers shall lie—with the Federal Legislature or the component States, on which Hindu and Moslem opinion is sharply divided. The powers of the Federal Court have to be determined—whether it is to be simply a Court for the adjudication of issues between the States and the Federal Government or, in addition, a Supreme Appellate Court for British India and such Indian States as may care to use it.

The ground has, however, been well explored, and these issues are ripe for decision. Moreover, the delegates will have before them an authoritative body of informa- tion on the Franchise, Federal Finance and the financial problems affecting the Indian States, which will help them to quick decisions. The Conference charged with this task commands confidence. The Indian Dele- gation is compact and representative, though we shall sadly miss the figure of Mr. Sastri, whose lofty purpose and splendid oratory lift every discussion to a high plane, and the Indian Princes with their wide and experienced grasp of affairs. Mr. Gandhi and the Congress have banged the door, wide open to their participation, by reverting to civil disobedience. It should be reopened if they proffer the golden key. The British delegates will bring to the discussions a detailed knowledge of the work- ing of Parliamentary institutions, as well in many cases a recent knowledge of India. In the circumstances of the' time the Conference could hardly have been better manned.

To the people of this Island, who stand behind the Conference and Parliament, may a word be said ? They are confronted by a tremendous problem—yes—but also by a superb opportunity. What is the nationalist move- ment in India ? Our own creation. It is the ripe fruit of close association with us and our liberty-loving institu- tions. Behind it lie the hundreds of thousands of students from Universities teaching our own literature in our own language; 'a newspaper Press which reaches the remotest corners of the land ; politicians and publicists taught in our own educational institutions and those of the United States and the Continent ; and a constitution slowly broadened from precedent to precedent. All these dyna- mic forces were quickened by the War and its aftermath ; the demand for self-governing institutions is one every intelligent- man- king • foresaw. 111 sowed the ; let us not be afraid of the harvest. But if we- are to.reap it we must recapture the spirit of adventure which Canada and other • Dominions established, self-governing nations within the Commonwealth.. The greater the courage and confidence we put forth now, the greater it'll' be the measure of our success.