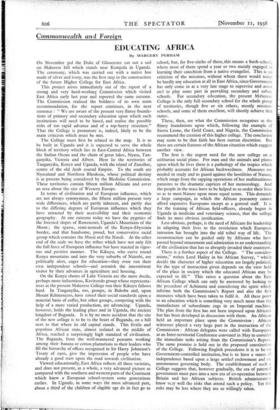 ON November 3rd the Duke of Gloucester cut out a sod on Makerere hill which stands near Kampala in Uganda. The ceremony, which was carried out with a native hoe made of silver and ivory, was the first step in the construction of the future Higher College for East Africa.

This project arises immediately out of the report of a strong and very hard-working Commission which visited East Africa early last year and reported the same autumn. The Commission realised the boldness of its own main recommendation, for the report continues, in the next sentence : "We are aware of the present very flimsy founda- tions of primary and secondary education upon which such institutions will need to be based, and realise the possible risks of too rapid advance and of a top-heavy structure." That the College is premature is, indeed, likely to be the main criticism which must be met.

The College must first be related to the map. It is to be built in Uganda and it is expected to serve the whole block of territory which lies in East-Central Africa between the Indian Ocean and the chain of great lakes, Nyasa, Tan- ganyika, Victoria and Albert. Here lie the territories of Tanganyika, Kenya and Uganda, with the island of Zanzibar, centre of the old Arab coastal Empire. To the south are Nyasaland and Northern Rhodesia, whose political destiny is at present being considered by the Bledisloe Commission. These territories contain fifteen million Africans and cover an area about the size of Western Europe.

In terms of civilisation and of European influence, which are not always synonymous, the fifteen million present very wide differences, which are partly inherent, and partly due to the differing degrees of European influence which they have attracted by their accessibility and their economic geography. At one extreme today we have the pygmies of the forested slopes of Ruwenzori, Uganda's Mountains of the Moon ; the sparse, semi-nomads of the Kenya-Abyssinia border, and that handsome, proud, but conservative racial group which contains the Masai and the Nandi. At the other end of the scale we have the tribes which have not only felt the full force of European influence but have reacted in vigor- ous and positive manner. The Kikuyu, who curve round Kenya mountains and into the very suburbs of Nairobi, are politically alert, eager for education—they even run their own independent schools—and astonish the intermittent visitor by their advances in agriculture and housing.

On the Kenya shores of Lake Victoria are the more docile, perhaps more industrious, Kavirondo group whose representa- tives at the present Makerere College run their Kikuyu fellows hard. In Tanganyika, too, groups, in Bukoba and, upon Mount Kilimanjaro, have raised their social standards upon a material basis of coffee, but other groups, competing with the help of a more varied production, are advancing. Uganda, however, holds the leading place and in Uganda, the ancient kingdom of Buganda. It is by no mere accident that the site of the new college is to be in the heart of Buganda, on a hill next to that where its old capital stands. This fertile and populous African state, almost isolated in the middle of Africa, reached a surprisingly high standard of civilisation. The Baganda, from the well-mannered peasants working among their banana or cotton plantations to their leaders who fill the hierarchy of offices recognised in Sir Harry Johnston's Treaty of 1900, give the impression of people who have already a good start upon the road towards civilisation.

Viewed educationally, East Africa reflects all these varieties, and does not present, as a whole, a very advanced picture as compared with the southern and western parts of the Continent which knew a European school-system some generations earlier. In Uganda, in some ways the most advanced part, about a third of the children of eligible age do in fact go to school, but, for five-sixths of these, this menns a bush-school, where most of them spend a year or two mainly engaged in learning their catechism from a native evangelist. This is no criticism of the missions, without whom there would today be hardly any education at all in East Africa, since Government has only come in at a very late stage to supervise and assist and to play some part in providing secondary and urban schools. For secondary education, the present Makerere College is the only full secondary school for the whole group of territories, though five or six others, mostly mission- schools, and some of them excellent, will shortly achieve that status.

These, then, are what the Commission recognises as the flimsy foundations upon which, following the example of Sierra Leone, the Gold Coast, and Nigeria, the Commission recommend the creation of this higher college. The conclusion may seem to be that faith has here outrun discretion. But there are certain features of the African situation which suggest another view.

The first is the urgent need for the new college on a utilitarian social plane. For man and the animals and plants upon which he lives there is a pathology of the tropics which probably accounts for African backwardness. Measures are needed to study and to guard against the hostilities of Nature, which range from the sapping operations of her multitudinous parasites to the dramatic caprices of her meteorology. And the people in the mass have to be helped to re-order their lives so as to meet Nature upon more equal terms. This demands a large campaign, in which the African peasantry cannot afford expensive Europeans except as a general staff. It is for the training of African field-officers, already begun in Uganda in medicine and veterinary science, that the college finds its most obvious justification.

Less obvious, perhaps, is the need of Africans for leadership in adapting their lives to the revolution which European intrusion has brought into the old tribal way of life. The reconstruction can be guidcd only by Africans who have passed beyond amazement and admiration to an understanding of the civilisation that has so abruptly invaded their continent.

There is a further aspect of the College. "The consider- ations," writes Lord Halley in his African Survey, "which decide the character of higher education are largely political, for the type of instruction given depends on the view held of the place in society which the educated African may be expected to fill." This raises a question about the East African College which can only be answered by looking to the 'precedent of Achimota and considering the spirit which informs both the Commission's Report and also the first measures which have been taken to fulfil it. All these point to an education which is something very much more than the manufacture of subordinate cogs in an Imperial machine. The plan from the first has not been imposed upon Africans but has been developed in discussion with them. An African held an important place upon the Commission : African witnesses played a very large part in the instruction of the Commission : African delegates were called with Europeans at an Inter-territorial Conference convened in May to consider the immediate tasks arising from the Commission's Report. The same promise is held out in tie proposed constitution of the College. Following English precedents it is to be no Government-controlled institution, but is to have a status of independence based upon a large settled endowment and an antomonous governing body. The establishment of such a College suggests that, however gradually, the era of paternal government must pass into a new era of co-operation between Britain and her African subjects. British administrators know vcry well the risks that attend such a policy. Yet the risks may be less where they are so willingly taken.