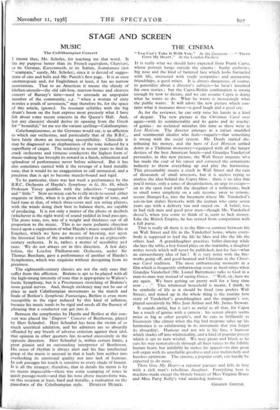 I THANK thee, Mr. Scholes, for teaching me that word. It fits my purpose better than its French equivalent, Charivari, or its German, Katzenmusik, or its Italian, Scampanata (not

" scampata," surely, Mr. Scholes), since it is devoid of sugges- tions of cats and bells and Mr. Punch's first page. It is at once

onomatopoeic and, for Englishmen at least, it has no narrow associations. That to an American it means the shindy of kitchen-utensils—the old salt-box, marrow-bones and cleavers concert of Burney's time—used to serenade an unpopular member of the community, e.g. "when a woman of sixty

marries a youth of seventeen," may therefore be, for the space of this article, ignored. Its resonant syllables with the big drum's boom on the beat express most precisely what I have felt about some recent concerts in the Queen's Hall. And, lest any classicist should derive its opening from the Greek for" beautiful," let me use the variant spelling—Calathumpian.

Calathumpianismus, as the Germans would say, is an affliction to which our orchestras, and particularly that of the B.B.C.,

have lately shown an increasing susceptibility. Clinically it may be diagnosed as an elephantiasis of the tone induced by a superfluity of catgut. The tendency in recent years to find in crack orchestras and virtuoso conductors the highest form of music-making has brought its reward in a finish, refinement and splendour of performance never before achieved. But it has also sometimes carried with it the revenge of a hard metallic tone, that it would be no exaggeration to call unmusical, and a precision that is apt to become muscle-bound and rigid.

To be particular, there was last week a performance by the B.B.C. Orchestra of Haydn's Symphony in G, No. 88, which

Professor Tovey qualifies with the adjectives " exquisite " and" little." Now no music can be really made to sound either exquisite or little, when it is given all the weight of tone, and hard tone at that, of which three-score and ten string players, with the winds doing their best to balance them, are capable of prod,ucing. It is not only a matter of the phons or decibels (whichever is the right word) of sound yielded in loud passages.

The ,piano tone, too, was of a weight and thickness out of all proportion to the music. This is no mere pedantic objection

based upon a supposition of what Haydn's music sounded like at Esterhaz, which we have no means of knowing, nor upon the historical facts of the number e:nployed in an eighteenth- century orchestra. It is, rather, a matter of sensibility and taste. We do not always err in this direction. A few days before, the London Philharmonic Orchestra, under Sir Thomas Beecham, gave a performance of another of Haydn's Symphonies, which was exquisite without derogating from its greatness.

The eighteenth-century classics are not the only ones that suffer from this affliction. Braluns is apt to be played with all the high-strung intensity of tone that is appropriate to Walton's hectic Symphony, but is a Procrustean stretching of Brahms's more genial nerves. And, though stridency may not be out of

place in such Calathumpian movements as the march and finale of Berlioz's Symphonie Fantastique, Berlioz is even more susceptible to the rigor induced by this kind of inflation, because his music tends to be rigid and needs all the fluency of phrasing that a conductor can get into it.

Between the symphonies by Haydn and Berlioz at this con- cert was placed the 'Emperor' Concerto of Beethoven, played

by Herr Schnabel. Herr Schnabel has been the victim of so much uncritical adulation, and his admirers are so absurdly offended by any breath of adverse criticism against their idol, that opinion in other quarters has re-acted excessively in the opposite direction. Herr Schnabel is, within certain limits, a great pianist and an outstanding interpreter of Beethoven.

His sense of rhythm is always alert and his fine intellectual grasp of the music is unusual in that it leads him neither into overlooking its emotional quality nor into lack of humour.

In soft passages his touch is sensitive to every shade of beauty. It is all the stranger, therefore, that in details his metre is by no means impeccable—there was some scamping of notes in quick passage-work—and .that his tone above mezzo-forte was, on this occasion at least, hard' and metallic, a realisation on the pianoforte of the Calathumpian style. DYNELEY HUSSEY.