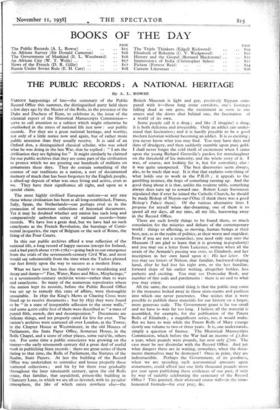 THE PUBLIC RECORDS: A NATIONAL HERITAGE

VAIUOUS happenings of late—the centenary of the Public Record Office this summer, the distinguished party held there

a few days ago by the Master of the Rolls, in the presence of the

Duke and Duchess of Kent, to celebrate it, the issue of the triennial report of the Historical Manuscripts Commission—

serve to call attention to a subject which might otherwise be overlooked in the stress of national life just now : our public records. For they are a great national heritage, and worthy, not only of a little notice now and again, but of rather more public attention than they usually receive. It is said of an Oxford don, a distinguished classical scholar, who was asked what he was doing in the late War, that he replied : "I am the civilisation they are fighting for." It might similarly be claimed for our public archives that they are some part of the civilisation to protect which we are pouring out hundreds of millions on armaments these days. They do contain something of the essence of our traditions as a nation, a sort of documented memory of much that has been forgotten by the English people, a silted-up deposit of what was once living and active, even as we. They have their significance all right, and upon us a special claim.

The most highly civilised European nations—at any rate those whose civilisation has been at all long-established, France, Italy, Spain, the Netherlands—can perhaps rival us in the possession of numerous collections of historical documents. Yet it may be doubted whether any nation has such long and comparatively unbroken series of national records—State records. We have lost a great deal, but we have had no such cataclysms as the French Revolution, the burnings of Conti- nental jacqueries, the rape of Belgium or the sack of Rome, the firing of the Four Courts.

In this our public archives afford a true reflection of the national life, a long record of happy success (except for Ireland, and a bad patch about 1776-1782)—going back to our emergence from the trials of the seventeenth-century Civil War, and most would say substantially from the time when the Tudors planted our feet firmly upon the way to success as a modern State.

What we have lost -has been due mainly to mouldering and decay and damp—" Fier, Water, Rates and Mice, Misplacinge," as a seventeenth-century archivist wrote—rather than to wars and cataclysms. So many of the numerous repositories where the nation kept its records, before the Public Record Office was set up to remedy this state of affairs, were thoroughly unsuitable. In 1830 the King's Mews at Charing Cross were fitted up to receive documents ; but by 1835 they were found to be "in a state of inseparable adhesion to the stone walls," and some 4,000 cubic feet of them were described as "a mass of putrid filth, stench, dirt and decomposition." Documents are delicate things, and yet properly cared for live for ever. The nation's archives were scattered all over London, at the Tower, in the Chapter House at Westminster, in the old Houses of Parliament, the State Paper Office, Somerset House, in the Rolls Chapel, and a score of other places, some suitable, others not. For some time a public conscience was growing on the matter—the early nineteenth century did a great deal of useful work in publishing State records : there are great series of them dating to that time, the Rolls of Parliament, the Statutes of the Realm, Stale Papers. At last the building of the Record Office was undertaken to centralist and house properly these scattered collections ; and bit by bit there rose gradually throughout the later nineteenth century, upon the old Rolls estate, that familiar, that sepulchral, prison-like building in Chancery Lane, to which we are all so devoted, with its pezuliar atmosphere, the like of which exists nowhere else—the

British Museum is light and gay, positively flippant com- pared with it—those long stone corridors, one's footsteps falling dead as one goes, the excitement as soon as one enters and the doors shut behind one, the fascination of a world of its own.

Some people call it a drug ; and like (I imagine) a drug, it is both delicious and irresistible. Only an addict can under- stand that fascination; and it is hardly possible to be a good modern historian without becoming an addict. It is so exciting ; you never know what you may find. You may have days and days of drudgery, and then suddenly stumble upon pure gold. I shall never forget the cold thrill of excitement when I came upon the young Richard Grenville's pardon for manslaughter on the threshold of his minority, and the whole story of it. I was, of course, not looking for it, but for something else : it was quite unexpected. The best discoveries seem always, alas, to be made that way. It is that that explains something of what holds one to work in the P.R.O. ; it appeals to the gambling instinct, the hope of something turning up. And the good thing about it is that, unlike the roulette table, something always does turn up to reward one. Robert Louis Stevenson stipulated that if ever he joined the Catholic Church, he should be made Bishop of Noyon-sur-l'Oise (I think there was a good Bishop's Palace there). Of the various alternative lives I propose for myself when day-dreaming, one of them is to spend all my days, all my time, all my life, burrowing away in the Record Office.

There are such lovely things to be found there, so much consolation for the miseries and defeats of the contemporary world : things so affecting, so moving, human beings at their best, not, as in the realm of politics, at their worst and stupidest. Even if you are not a researcher, you need only step into the Museum (I am glad to learn that it is growing in popularity) and you may see a letter from Leicester, written when all the strain of the Armada's passing was over, to Elizabeth, and her inscription in her own hand upon it : His last letter. Or you may see letters of Nelson, that familiar, backward-sloping hand, after he had lost his right arm, or the less familiar, forward slope of his earlier writing, altogether bolder, less pathetic and exciting. You may see Domesday Book, any number of fine seals and parchments : there is no end to what you may enjoy.

All the same, the essential thing is that the public may come to the treasures locked away in those store-rooms and purlieus into which one never penetrates. One wishes that it were possible to publish these materials for our history on a larger, more generous scale. The Government grant is far too small and we have to wait far too long. I believe all the material is assembled, for example, for the publication of the Patent Rolls of Elizabeth ; a magnificent series, too, it would make. But we have to wait while the Patent Rolls of Mary emerge slowly one volume to two or three years. It is, one understands, simply a question of finance. The Historical Manuscripts Commission, which before the War had an income of £1,800 a year, when pounds were pounds, has now only £700. The case must be not dissimilar with the Record Office. And yet what dangers there are in waiting, nowadays, when the docu- ments themselves may be destroyed ! Once in print, they are indestructible. Perhaps the Government, of its goodness, when we are spending such astronomical amounts upon armaments, could afford just one little thousand pounds more per year upon publishing these evidences of our past, if only by way of suitably celebrating the centenary of the Record Office ? This granted, their aforesaid orator will—in the time- honoured formula—for ever pray, &c.