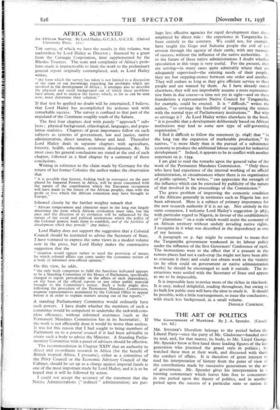 Tim survey, of which we have the results in this volume, was undertaken by Lord Hailey as Director ; financed by a grant from the Carnegie Corporation, later supplemented by the Rhodes Trustees. The scale and complexity of Africa's prob- lems made it impracticable to limit the work to the preliminary general report originally contemplated, and, as Lord Hailey

"the form which the survey has taken is not limited to a discussion of the state of our knowledge regarding the problems which are involved in the development of Africa ; it attempts also to describe the physical and social background out of which these problems have arisen, and to analyse the factors which, so far as can be seen now, must determine their solution."

If that test be applied no doubt will be entertained, I believe, that Lord Hailey has accomplished his arduous task with remarkable success. The survey is confined to that part of the mainland of the Continent roughly south of the Sahara.

The first four chapters deal with purely " approach " sub- jects ; physical background, ethnological, languages, and popu- lation statistics. Chapters of great importance follow on such subjects as systems of government, law and justice, native administration, direet taxation, labour and land. Thereafter Lord Hailey deals in separate chapters with agriculture, forestry, health, education, economic development, &c. In most cases his general conclusions are stated at the end of each chapter, followed in a final chapter by a summary of those conclusions.

" it is possible that history, looking back in retrospect on the part played by Imperial Powers in Africa, will be more concerned with the nature of the contribution which the European occupation will have made to the future of the African peoples, than with the profit or loss which the African connexion may have brought to Europe," followed closely by the further weighty remark that "African temperament and character must in the long run largely determine the form which African civilisation must take, but the pace and the direction of its evolution will be influenced by the nature of the social and political institutions which the policy of the Colonial powers leads them to establish, and of the facilities of development which they provide" (my italics).

Lord Hailey does not support the suggestion that a Colonial Council should be instituted to advise the Secretary of State. I have ventured to express the same views in a modest volume now in the press, but Lord Hailey makes the constructive suggestion that the

"situation would appear rather to need the provision of means by which colonial affairs can come under the systematic review of a body of informed non-official opinion."

On this view, he adds,

"the only body competent to fulfil the functions indicated appears to be a Standing Committee of the House of Parliament, specifically charged to report periodically on the affairs of each dependency, on the basis of the official reports or any other public material brought to the Committee's notice. Such a body might also, following the procedure of the Permanent Mandates Commission, examine representatives nominated by the Colonial Office to appear before it in order to explain matters arising out of the reports."

A standing Parliamentary Committee would ordinarily have such powers. I have doubt whether the members of such a committee would be competent to undertake the taskwith corn- plete efficiency, without informed assistance (such as the Permanent Mandates Commission has in its Secretariat). If the work is not efficiently done it would be worse than useless. It was for this reason that I had sought to bring members of Parliament on to a general council if it had been advisable to create such a body to advise the Minister. A Standing Parlia- mentary Committee with a panel of advisers should be effective.

The recommendation in Chapter XXIV that an authority to direct and co-ordinate research in Africa (for the benefit of British tropical Africa, I presume), either as a committee of the Privy Council or the Economic Advisory Council of the Cabinet, should be set up as a charge against imperial funds is one of the most important made by Lord Hailey, and it is to be hoped that it will be followed by action.

I could not accept the accuracy of the statement that the Native Administrations (" indirect" administration) are per- haps less effective agencies for rapid development than thos.: employed by direct rule : the experience in Tanganyika has been entirely to the contrary. We could not, for examplt have taught the Gogo and Suktuna people the evil of soil erosion through the agency of their cattle, with any measure of success, without the influence of the native authorities. As to the future of these native administrations I doubt whether speculation at this stage is very useful. For the present, they are serving—in many cases quite admirably where they are adequately supervised—the existing needs of their people ; they are but stepping-stones between one order and another. They will endure as long as they give efficient service to their people and are wanted by them. As I have already stated elsewhere, they will not improbably assume a more representa- tive form in due course—a time not yet in sight—and on these foundations a representative Native Council for Tanganyika, for example, could be erected. It is "difficult," writes the author, "to envisage the feasibility of integrating the system with the normal type of Parliamentary institutions." But why so envisage it ? As Lord Halley writes elsewhere in the book, "it is possible that a development deliberately based on African institutions may lead to some new type of self-governing organisation."

I find it difficult to follow the statement (p. 1648) that "in the long run the expansion of marketable production," by natives, "is more likely than is the pursuit of a subsistence economy to produce the additional labour required for industrial development." Indeed, it appears to be in conflict with another statement on p. 1394.

I am glad to read the remarks upon the 'general value of the work of the Permanent Mandates Commission. "Only those who have had experience of the internal working of an official administration, in circumstances where there is no organisation of public opinion," he writes, "can appreciate the strength of the influence which can be exercised by publicity of the nature of that involved in the proceedings of the Commission."

The grave problem of improving the economic condition of the Africans generally in territories such as Nigeria has not been advanced. Here is a subject of primary importance for the new research authority if it is set up. Not entirely in the same connexion, I welcome Lord Hailey's suggestion (p. 983), with particular regard to Nigeria, in favour of the establishment of " plantations " on a scale which would assist the economy of an African territory without unduly invading native rights. I recognise in it what was described in the dependency as one of my heresies.

A paragraph on p. 642 might be • construed to mean that the Tanganyika government weakened in its labour policy under the influence of the first Governors' Conference of 1926. The instructions were to the effect that if a peasant in the remote places had not a cash-crop (he might not have been able to evacuate it then) and could not obtain work in the vicinity (as he often could on government or native administration works) he should be encouraged to seek it outside. The in- structions were settled with the Secretary of State and appear to me to be impeccable.

It is impossible here to notice more of the riches in this book. It is easy, indeed delightful, reading throughout, but owing to its bulk few public men will have the time to study it. It should be possible, with a little rearrangement, to issue the conclusions, with much less background, in a small volume.