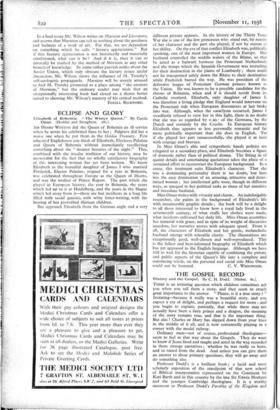 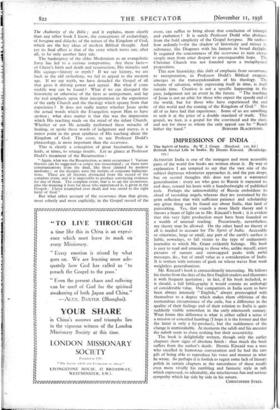 THERE is an irritating question which children sometimes ask you when you tell them a story, and they seem to attach great importance to the answer. "Please, is it a true story ? " Irritating—because it really was a beautiful story, and you expect a cry of delight, and perhaps a request for more; and you begin to explain, patiently, that while there may not actually have been a fairy prince and a dragon, the meaning of the story remains true, and that is the important thing. But alas ! Charles or Mary has slipped down from your knee in the middle of it all, and is now contentedly playing in a corner with the model railway. Ordinary men—not of course, professional theologians— seem to fed in that way about the Gospels. They do want to know if Jesus lived and taught and acted in the way recorded in those strange narratives; whether he was really so born, and so raised from the_dead. And unless you can give them an answer to those primary questions, they will go away and do something else. Professor Dodd's is a .brilliant book; a lucid and most scholarly exposition of the standpoint of that new, school of Biblical interpretation represented on the Continent by Karl Barth and in this country by the late Sir Edwin Hoskyns and the younger Cambridge theologians. It is a worthy

successor to Professor Dodd's Parables of the dein and The Authority of the Bible ; and it explains, more clearly than any other book I know, the conceptions of eschatology, of kerygma and didache, of the nature of the Kingdom of God, which are the key ideas of modern Biblical thought. And yet its final effect is that of the story which turns out, after all, to be only another fairy tale.

The bankruptcy of the older Modernism as an evangelistic force has led to a curious compromise. Are these facts— of Christ's birth and death and resurrection, His miracles and His sayings—history or myth ? If we say history, we are back in the old orthodoxy, we fail to appeal to the modern age. If we say myth, we have denuded the Gospel of all that gives it driving power and appeal. But what if some middle way can be found ? What if we can disregard the historicity or otherwise of the facts as unimportant, and lay the real emphasis upon their interpretation in the experience of the early Church and the theology which sprang from that experience ? It does not really matter whether Jesus spoke the actual words which the Evangelists report Him to have spoken ; what does matter is that this was the impression which His teaching made on the mind of the infant Church. Whether or not He actually performed these miracles of healing, or spoke these words of judgement and mercy, is a minor point in the great synthesis of His teaching about the Kingdom of God. The event, to use Professor Dodd's phraseology, is more important than the occurrence.

This is clearly a conception of great fascination, but it leads, at times, to strange results. Let us glance at Professor Dodd's treatment of the Resurrection:

"Again, what was the Resurrection, as mere occurrence ? Various theories can be suggested—a corpse was resuscitated • or there were communications from the dead, like those claimed by modern mediums ; or the disciples were the victims of corporate hallucina- tions. These are all theories abstracted from the record of the complete event, and it is impossible to produce convincing evidence for any of them. The complete event, that is to say the occurrence, plus the meaning it bore for those who experienced it, is given lathe Gospels : Christ triumphed over death and was raised to the right hand of God."

But what other account of the occurrence than that given, most soberly and most explicitly, in the Gospel record of the

event, can suffice to bring about that conclusion of triumph and exaltation ? It is surely Professor Dodd who abstracts from the bold simplicity of the Gospel kerygma. He seeks— how ardently !—for the shadow of historicity and misses its substance, like Diogenes with his lantern in broad daylight. It required the concreteness Of the occurrence to turn eleven simple men from utter despair to. unconquerable hope. The Christian Church was not founded upon a metaphysical proposition. This new historicity, this shift of emphasis from occurrence to interpretation, in Professor Dodd's . Biblical exegesis, emerges in the transcendentalism of his theology. The scheme of salvation, while expressing itself in time, is itself outside time. Creation is not a specific happening in the past, judgement not an event in the future. "The teaching of Jesus is not an ethic for those who expect the speedy end of the world, but for those who have experienced the end of this world and the coming of the Kingdom of God." Not all of us have had that experience: Some of us are unwilling to seek it at the price of a double standard of truth: This gospel, we fear, is a gospel for the convinced and the elect, and not for those to whom the only appeal can be "Reach