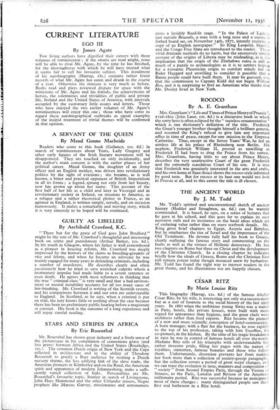 and Stoughton, 9s. 6d.) can be warmly commended. It is based, he says, on a series of lectures that he gave at his school, and this goes far to explain its easy narrative style and its insistence on the basic ideas which are of enduring value rather than on mere textbook details. Mr. King gives brief chapters to Egypt, Assyria and Babylon, but he emphasises the rise of Israel and the importance of the Old Testament. He devotes fully half his book to Greece, clearly outlining the famous story and commenting on the faults as well as the virtues of Hellenic democracy. He has two chapters on Rome but three on Christ and the development of the Christian Church. In a closing chapter he indicates briefly how the ideals of Greece, Rome and the Christian East still remain potent today though menaced anew by barbarism. Mr. Todd has found the right way to interest readers in the great theme, and his illustrations too are happily chosen.