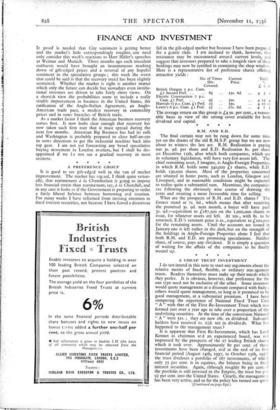 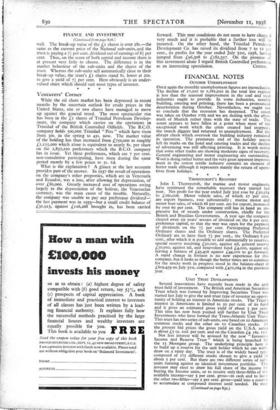 IF proof is needed that City sentiment is getting better and the market's hide correspondingly tougher, one need only consider this week's reactions to Herr Hitler's speeches at Weimar and Munich. Three months ago such truculent outbursts would have brought an instantaneous marking down of gilt-edged prices and a reversal of any hopeful sentiment in the speculative groups ; this week the worst that could be said is that the recovery trend has been slightly restrained. Whether the market is right is another matter which only the future can decide but nowadays even institu- tional investors are driven to take fairly short views. On a shortith view the probabilities seem to include a really sizable improvement in business in the United States, the ratification of the Anglo-Italian Agreement, an Anglo- American trade pact, a modest recovery in commodity prices and in some branches of British trade.

As a market factor I think the American business recovery comes first. It now looks clear enough that recovery has now taken such firm root that it must spread during the next few months. American Big Business has had its sulk and Washington is probably prepared to close half-an-eye in some directions to get the industrial machine back into top gear. I am not yet forecasting any broad speculative buying movement in London mirkets, but I shall be dis- appointed if we lo not see a gradual recovery in most sections.

A PREFERENCE GROUP It is good to see gilt-edged well in the van of market improvement. The market has argled, I think quite ration- ally, that rearmament a la Chamberlain is going to impose less financial strain than rearmament, say, a la Churchill, and in any case it looks as if the Government is preparing to strike a fairly liberal balance between borrowing and taxation. For many weeks I have refrained from inviting attention to fixed interest securities, not because I have feared a disastrous fall in the gilt-edged market but because I have been prepared for a gentle slide. I am inclined to think, however, that resistance may be encountered around current levels, and suggest that investors prepared to take a longish view of their holdings may now be justified in examining the shop window. Here is a representative list of preference shares offering attractive yields :

The final curtain may not be rung down for some time yet on the drama of the old R.M.S.P. group but we are now about to witness the last act. R.M. Realisation is paying out 3s. 9d. per share and E.D. Realisation 8s. per share on December i5th, after which both companies, which are in voluntary liquidation, will have very few assets left. The chief remaining asset, I imagine, is Anglo-Foreign Properties, in which R.M. holds some 340,000 Li shares, while E.D. holds x30,000 shares. Most of the properties concerned are situated in home ports, such as London, Glasgow and Liverpool, and in reasonable conditions might be expected to realise quite a substantial sum. Meantime, the companies are following the obviously wise course of drawing the rents and awaiting a more favourable time for selling.

What are the prospects of R.M. and E.D. shares ? The former stand at 7s. 6d., which means that after receiving the promised 3s. 9d. next month, a buyer will have paid 3s. 9d.—equivalent to £187,500 on the 1,000,000 shares in issue, for whatever assets are left. At los., with 8s. to be returned, E.D.'s remnant price is 2S., equivalent to Ltoo,000 for the remaining assets. Until the accounts are issued in January one is left rather in the dark, but on the strength of the holdings in Anglo-Foreign Properties alone I feel that both R.M. and E.D. are promising speculations. Neither share, of course, pays any dividend. It is simply a question of waiting for the affairs of the companies to be finally wound up.

I do not intend in this note to start any arguments about the relative merits of fixed, flexible, or ordinary management trusts. Readers themselves must make up their minds which they prefer. It is obvious, however, that preference for the one type need not be exclusive of the other. Some investors would quote management at a discount compared with fixity ; others would quote management, so long as it promised to be good management, at a substantial premium. I have been comparing the experience of National Fixed Trust Unit " A " with that of the First Re-Investment Trust which was formed just over a year ago to take over a proportion of the underlying securities. At the time of the conversion National " A " were 31s.; they are now 28s. ex dividend. Sub-unit holders have received Is. 21d. net in dividends. What has happened to the management trust ?

It is apparent that First Re-Investment, which has Lord Kennet as chairman and an experienced board, was not impressed by the prospects of the 27 leading British shares which it took over. Approximately 80 per cent.- of these investments have been changed, and at the end of its first financial period (August 14th, 1937, to October 15th, 193S) the trust discloses a portfolio of 167 investments, of which only 55 per cent. is in equities, the balance being in fixed interest securities. Again, although roughly 80 per cent. of the portfolio is still invested in the Empire, the trust has put 94 per cent. into the United States. Clearly, the managemeLt has been very active, and so far the policy has turned out quite (Continued an page 830.)

No. of Times Current

FINANCE AND INVESTMENT (Continued from page 828.) well. The break-up value of the Li shares is over 28s.—the same as the current price of the National sub-units,and the trust is paying a 71 per cent. dividend out of earnings of 81 per cent. Thus, on the score of both capital and income there is at present very little to choose. The difference is in the market behaviour of the sub-units and the shares of the trust. Whereas the sub-units sell automatically close to their break-up value, the trust's it shares stand 8s. lower at 205. to give a yield of 71 per cent. Here obviously is an under- valued share which should suit most types of investor. * * * *

While the oil share market has been depressed in recent months by the uncertain outlook for crude prices in the United States one or two shares have managed to move up against the general trend. The most spectacular rise has been in the Li shares of Trinidad Petroleum Develop- ment, the company which carries on the operations in Trinidad of the British Controlled Oilfields. The B.C.O. company holds 500,000 Trinidad " Pets " which have risen from 305. in the spring to 45s. now. The market value of the holding has thus increased from £750,000 to roughly £1,125,000 which alone is equivalent to nearly 8s. per share on the 2,857,100 preferences which the B.C.O. company has in issue. Yet these preferences, which are 7 per cent. non-cumulative participating, have risen during the same period merely -by a few pence to 5s. ed.

What is the explanation? A glance at the last accounts provides part of the answer. In 1937 the result of operations on the company's other properties, which are in Venezuela and Ecuador, was a loss, after allowing for depreciation, of over £8o,000. Greatly increased cost of operations owing largely to the depreciation of the bolivar, the Venezuelan currency, was the main cause of the trouble. Naturally, the company was unable to pay any preference dividend— the last payment was in 1933—but a small credit balance of £31,913, against £116,268 brought in, has been carried forward. This year conditions do not seem to have chang‘d very much and it is probable that a further loss will be incurred. On the other hand, the Trinidad Petroleum Development Co. has raised its dividend from 7 to 12 per cent., its profits for the year ended July 31st, 1938, having jumped from £96,308 to £182,357. On the promise of this investment alone I regard British Controlled preferences