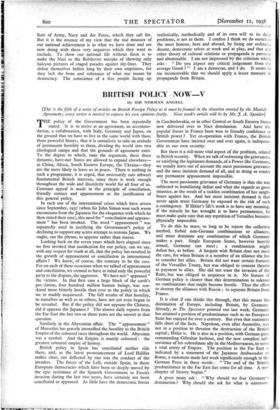 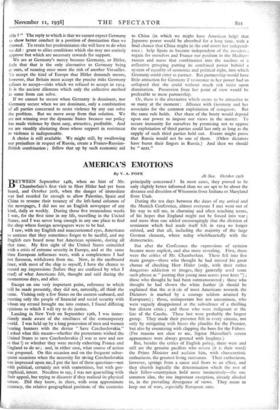 [This is the fifth of a series of articles on British Foreign Policy as it must be framed in the situation created by the Munich Agreement; every writer is invited to express his own opinions freely. Next week's article will 1..? by Mr. J. A. Spender] THE policy of the Government has been repeatedly stated. It is to arrive at an agreement, an accommo- dation, a collaboration, with Italy, Germany and Japan, on the ground that we have to live in the same world with those three powerful States ; that it is unrealistic to take an attitude of permanent hostility to them, dividing the world into two ideological camps and that the grounds of agreement exist. To the degree to which, runs the argument, these three dynamic, have-not States are allowed to expand elsewhere— in China, Africa, South Eastern Europe, the Ukraine—they are the more likely to leave us in peace. There is nothing in such a programme, it is urged, that necessarily cuts athwart fundamental British interests, since there is work enough throughout the wide and disorderly world for all four of us. Constant appeal is made to the principle of conciliation, friendly contact and appeasement as the justification of this general policy.

In each one of the international crises which have arisen since September, 1931 (when Sir John Simon won such warm encomiums from the Japanese for the eloquence with which he then stated their case), this need for" conciliation and appease- ment" has been invoked. The word " appeasement " was repeatedly used in justifying the Government's policy of declining to support any active attempt to restrain Japan. We ought, ran the phrase, to appease rather than coerce.

Looking back on the seven years which have elapsed since we first invoked that justification for our policy, can we say, with any respect for truth at all, that the policy has resulted in the growth of appeasement or conciliation in international affairs ? We know, of course, the contrary to be the case. For on each of these occasions when we talked of appeasement and conciliation, we seemed to have in mind only the powerful party to the dispute, the aggressor. We have not" appeased" the victims. In that first case a large block of the earth's poc ,ilation, four hundred million human beings, was ren- dered more bitterly hostile than ever to the policy in which we so readily acquiesced. The full results of that hostility, to ourselves as well as to others, have not yet even begun to be revealed. But if the policy did not appease the Chinese, did it appease the Japanese ? The almost daily reports from the Far East the last two or three years are the answet to that question.

Similarly in the Abyssinian affair. The " appeasement " of Mussolini has gravely intensified the hostility to the British Empire of the coloured races throughout the world. Abyssinia was a symbol. And the Empire is mainly coloured : the greatest coloured empire of history.

British policy in Spain has conciliated neither side there, and, as the latest pronouncement of Lord Halifax makes clear, not deflected by one iota the conduct of the invaders. The forces of the Left, outside Spain, in those European democracies which have been so deeply moved by the epic resistance of the Spanish Government to Fascist invasion during the last two years, have certainly not been conciliated or appeased. As little have the democratic forces in Czechoslovakia, or in other Central or South Eastern States now delivered over to Nazi domination. And have the popular forces in France been won to friendly confidence in British power ? Yet co-operation with France, the British Government have insisted over and over again, is indispens- able to our own security.

But there is a still more vital aspect of the problem, related to British security. When we talk of redressing the grievances, or satisfying the legitimate demands, of a Power like Germany, we usually leave out of account the most passionate grievance and the most insistent demand of all, and in doing so render any permanent appeasement impossible.

The most passionate grievance of Germany is that she was subjected to humiliating defeat and what she regards as gross injustice, as the result of a sudden combination of her neigh- bours against her. And her most insistent demand is that never again must Germany be exposed to the risk of such a contingency. If Hitler's life's work is to have any meaning, if the miracle he has wrought is to have permanence, he must make quite sure that any repetition of Versailles becomes physically impossible.

To do this he must, so long as he rejects the collective method, forbid non-German combinations or alliances, and must dominate any combination of which Germany makes a part. Single European States, however heavily armed, Germany can meet ; a combination might defeat her, as before. A bargain with Britain does not meet the case, for when Britain is a member of an alliance she has to consider her allies. Britain did not want certain features of the Versailles Treaty, but was obliged to consent thereto as payment to allies. She did not want the invasion of the Ruhr, but was obliged to acquiesce in it. No feature of German policy is clearer than this determination to tolerate no combinations that might become hostile. Thus the effort to destroy the alliances with Russia ; to separate Britain from France.

It is clear if one thinks this through, that this means the domination of Europe, including Britain, by Germany. Already, as The Spectator pointed out last week, Germany has attained a position of predominance such as no European State has enjoyed for over a century. But even that statement falls short of the facts. Napoleon, even after Austerlitz, was not in a position to threaten the destruction of the British capital ; Hitler is. He is also in a position, with German guns commanding Gibraltar harbour, and the now complete sub- servience of his subordinate ally in the Mediterranean, to sever a vital artery of Empire. The position in the Far East is indicated by a statement of the Japanese Ambassador to Rome, a statement made last week significantly enough to the German Press in these words : "The end of the British predominance in the Far East has come for all time. A new chapter of history begins."

A great many ask : "Why should we fear Germany's domination ? Why should she ask for what is unreason- able ? " The reply to which is that we cannot expect Germany to show better conduct in a position of domination than we showed. To retain her predominance she will have to do what we did : grant to allies conditions which she may not entirely approve but which are necessary rewards for support.

We are at Germany's mercy because Germany, or Hitler, feels that that is the only alternative to Germany being at ours, of running once more the risk of another Versailles. To accept the kind of Europe that Hitler demands means, however, that Britain must accept the precise risks Germany refuses to accept—risks which we refused to accept in 1914. It is the ancient dilemma which only the collective method in some form can solve.

If we cannot be secure when Germany is dominant, nor Germany secure when we are dominant, only a combination of all parties concerned to resist violence by any can solve the problem. But we move away from that solution. We are not winning over the dynamic States because our policy has made violence by them easy, attractive, profitable. And we are steadily alienating those whose support in resistance to violence is indispensable.

A choice is still available. We might still, by swallowing our prejudices in respect of Russia, create a Franco-Russian- British combination ; follow that up by such economic aid to China (in which we might have American help) that Japanese power would be absorbed for a long time, with a final chance that China might in the end assert her independ- ence; help Spain to become independent of the invaders ; regain for ourselves and France our position in the Mediter- ranean and nurse that combination into the nucleus of a collective grouping putting its combined power behind a system of equality of economic and political right, into which Germany could enter as partner. But partnership would have little attraction for Germany if resistance to her power had so collapsed that she could without much risk insist upon domination. Possession from her point of view would be preferable to mere partnership.

Or, there is the alternative which seems to be attractive to so many at the moment : Alliance with Germany and her associates for the common exploitation of conquests. But the same rule holds. Our share of the booty would depend upon our power to impose our views in the matter. To secure immunity for ourselves by promising not to oppose the exploitation of third parties could last only as long as the supply of such third parties held out. Events might prove that Russia would not be one of them. (Other dictators have burnt their fingers in Russia.) And then we should be "next."