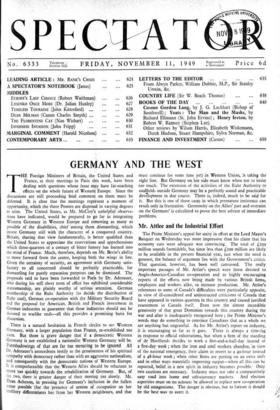 Mr. Attlee and the Industrial Effort

The Prime Minister's appeal for unity in effort at the Lord Mayor's Banquet on Wednesday was more impressive than his claim that his economy cuts were adequate was convincing. The total of £250 million sounds formidable, but since less than Etoo million are likely to be available in the present financial year, just when the need is greatest, the balance of argument lies with the Government's critics. That question, however, has been well canvassed. The really important passages of Mr. Attlee's speech were those devoted to Anglo-Americo-Canadian co-operation and to highly encouraging reports of the efforts now being made by various British firms, employers and workers alike, to increase production. Mr. Attlee's references to some of Canada's difficulties were particularly apposite, in view of ill-considered and uninstructed criticisms of Canada that have appeared in various quarters in this country and caused justified resentment in Canada itself. Even now the almost incredible generosity of that great Dominion towards this country during the war and after is inadequately recognised here ; the Prime Minister's words may do something to convince Canadians that as a whole we are anything but ungrateful. As for Mr. Attlee's report on industry, it is encouraging so far as it goes. There is always a time-lag in response to official exhortations, but when a firm of the standing of de Havillands decides to work a five-and-a-half-day instead of a five-day week ; when the iron and steel workers abandon, in view of the national emergency, their claim to revert to a 4o-hour instead of a 48-hour week ; when other firms are putting on an extra shift and in other ways materially improving output—when all this can be reported, belief in a new spirit in industry becomes possible. Only two cautions are necessary. Industry must not take a comparatively easy road into home and soft-currency markets. And election asperities must on no actiount be allowed to replace new co-operation by old antagonisms. The danger is obvious, but to foresee it should be the best way to avert it.