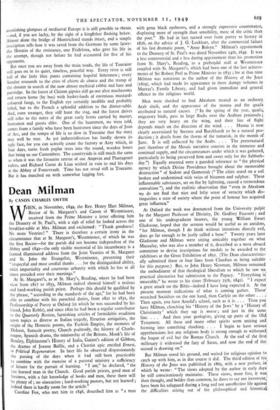 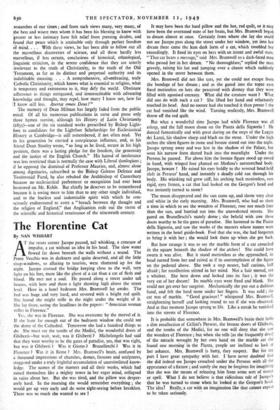 By CANON CHARLES SMYTH HEN, in November, 1849, the Rev. Henry Hart Milman, Rector of St. Margaret's and Canon of Westminster, received from the Prime Minister a letter offering him the Deanery of St. Paul's, with a sigh of relief he looked across the breakfast-table at Mrs. Milman and exclaimed: "Thank goodness! No more Vestries! " There is therefore a certain irony in the circumstance that at St. Margaret's, Westminster, of which he was the first Rector—for the parish did not become independent of the Abbey until 184o—the only visible memorial of his incumbency is a framed illuminated address from the Joint Vestries of St. Margaret and St. John the Evangelist, Westminster, presenting their "respectful and most cordial thanks . . . for the distinguished ability, strict impartiality and courteous urbanity with which he has at all times presided over their meetings."

At St. Margaret's, as at St. Mary's, Reading, where he had been vicar from 1817 to 1835, Milman indeed showed himself a zealous and hard-working parish priest. Perhaps this should be qualified by the phrase, " according to the standards of the age," for he had been able to combine with his parochial duties, from 1821 to 1831, the Professorship of Poetry at Oxford (in which he was succeeded by his friend, John Keble), and since 1820 he had been a regular contributor to the Quarterly Review, furnishing articles of formidable erudition upon topics as diverse as Italian tragedy, Etrurian antiquities, the origin of the Homeric poems, the Turkish Empire, the memoirs of Diderot, Sanscrit poetry, Church psalmody, the history of Charle- magne, Spanish drama, the ministrelsy of the Britons, Monk's life of Bentley, Elphinstone's History of India, Guizot's edition of Gibbon, the dramas of Joanna Baillie, and a Chartist epic entitled Ernest, or Political Regeneration. In later life he observed dispassionately the passing of the days when it had still been practicable to combine with the exercise of a pastoral ministry a sufficiency of leisure for the pursuit of learning. " I am," he declared, " the last learned man in the. Church. Good parish priests, good men of business, with a fair knowledge of books and men, these there will be plenty of ; no sinecurists ; hard-working pastors, but not learned ; indeed there is hardly room for the article."

with great black eyebrows, and a strongly expressive countenance, displaying more of strength than sensibility, more of the critic thaq the poet." He had in fact turned over from poetry to history in 1826, on the advice of J. G.•Lockhart, after the commercial failure of his last dramatic poem, " Anne Boleyn." Milman's appointment to the Deanery of St. Paul's was dated November 14th, 1849. It was a less controversial and a less daring appointment than his promotion from St. Mary's, Reading, to a prebendal stall at Westminster coupled with St. Margaret's, which had been one of the last achieve- ments of Sir Robert Peel as Prime Minister in 1835 ; for at that time Milman was notorious as the author of the History of the Jews (1829), which had made its appearance in three dumpy volumes in Murray's Family Library, and had given immediate and general offence to the religious world.

Men were shocked to find Abraham treated as an ordinary, Arab sheik, and the appearance of the manna and the quails attributed to natural causes. (" In the spring of the year, quails; migratory birds, pass in large flocks over the Arabian peninsula ; they are very heavy on the wing, and their line of flight depends much on the direction of the wind. . . . Manna is now clearly ascertained by Seetzen and Burckhardt to be a natural pro-, duction ; it distils from the thorns of the tamarisk, in the month of• June. It is still collected by the Arabs. . . . The preternatural part therefore of the Mosaic narrative consists in the immense and continual supply, and the circumstances under which it was gathered, particularly its being preserved firm and sweet only for the Sabbath- day.") Equally resented were a guarded reference to " the physical agency by which Divine Providence brought about the memorable destruction" of Sodom and Gomorrah (" The cities stood on a soil broken and undermined with veins of bitumen and sulphur. These inflammable substances, set on fire by lightning, caused a tremendous convulsion "), and the realistic observation that "even in Abraham we do not find that nice and lofty sense of veracity which dis- tinguishes a state of society where the point of honour has acquired great influencis."

At Oxford the work was denounced from the University pulpit by the Margaret Professor of Divinity, Dr. Godfrey Faussett ; and one of his undergraduate hearers, the young William Ewart Gladstone, hoped that the sermon would be useful as an antidote, "for Milman, though I do think without intentions directly evil, does go far enough to be justly called a bane." Twenty years later Gladstone and Milman were sitting amicably together on what Macaulay, who was also a member of it, described as a most absurd committee to devise inscriptions for medals to be awarded to the exhibitors at the Great Exhibition of 1851. (The Dean characteristic-' ally submitted three or four lines from Claudian as being suitable for this purpose.) But, to John Henry Newman, Milman remained the embodiment of that theological liberalism to which he saw no, practical alternative but submission to the Papacy. " Everything is', miserable," he wrote to his sister (February 25th, 1840). " I expect a great attack on the Bible—indeed I have long expected it. At the' present moment indications of what is coming gather. Thosel wretched Socialists on the one hand, then Carlyle on the other . . . Then again, you have Arnold's school, such as it is. . . . Then you have Milman, clenching his 'History of the Jews' by a ' History oft Christianity' which they say is worse ; and just in the same line. . . . And then your geologists, giving up parts of the Old Testament. All these and many other spirits seem uniting and forming into something shocking. . . . I begin to have serious apprehensions lest any religious body is strong enough to withstand' the league of evil but the Roman Church. At the end of the first' millenary it withstood the fury of Satan, and now the end of the' second is drawing on."

But Milman stood his ground, and waited for religious opinion to catch up with him, as in due course it did. The third edition of his History of the 7ews was published in 1863, with a new preface, in which he wrote: "The views adopted by the author in early days' he still conscientiously maintains. These views, more free, it was' then thought, and bolder than common, he dares to say not irreverent,' have been his safeguard during a long and not unreflective life against the difficulties arising out of the philosophical and historical

researches of our times ; and from such views many, very many, of the best and wisest men whom it has been his blessing to know with 'greater or less intimacy have felt relief from pressing doubts, and found that peace which is attainable only through perfect freedom of mind. . . . With these views, he has been able to follow out all the marvellous discoveries of science, and all those hardly less marvellous, if less certain, conclusions of historical, ethnological, linguistic criticism, in the serene confidence that they are utterly irrelevant to the truth of Christianity, to the truth of the Old Testament, as far as its distinct and perpetual authority and its indubitable meaning. . . . A comprehensive, all-embracing, truly Catholic Christianity, which knows what is essential to religion, what is temporary and extraneous to it, may defy the world. Obstinate adherence to things antiquated, and irreconcileable with advancing knowledge and thought, may repel, how many I know not, how far know still less. Avertat omen Deus!"

The memory of Dean Milman has largely faded from the public mind. Of all his numerous publications in verse and prose only three hymns survive, although his History of Latin Christianity (1855)—one of the six standard works prescribed by Bishop Light- foot to candidates for the Lightfoot Scholarships for Ecclesiastical History at Cambridge—is still remembered, if not often read. Yet in his generation he exerted a conspicuous influence, and, as his friend Dean Stanley wrote, " so long as he lived, secure in his high position, there was a lasting pledge for the freedom, the generosity and the justice of the English Church." His hatred of intolerance was less restricted than is normally the case with Liberal theologians ; if he opposed the dismissal of Professor Maurice, and, almost alone among dignitaries, subscribed to the Bishop Colcnso Defence and Testimonial Fund, he also rebuked the Archbishop of Canterbury because no ecclesiastical preferment or recognition had ever been bestowed on Mr. Keble. But chiefly he deserves to be remembered because it is owing more to him than to any other single individual, and to the fearless and indomitable spirit with which he con- sciously endeavoured to avert a " breach between the thought and the religion of England," that Anglicanism rode out the storm of the scientific and historical renaissance of the nineteenth century.