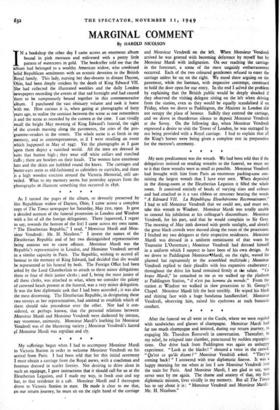 IN a bookshop the other day I cane across an enormous album bound in pink morocco and enlivened with a pretty little pattern of watercress in gold. The bookseller told me that the 'album had belonged to a wealthy American widow, who combined solid Republican sentiments with an ecstatic devotion to the British ;Royal family. This lady, nursing her day-dreams in distant Dayton, Ohio, had been deeply stricken by the death of King Edward VII. ,She had collected the illustrated weeklies and the daily London 'newspapers recording the events of that sad fortnight and had caused them to be sumptuously bound together in this commemorative 'album. I purchased the vast obituary volume and took it home 1With me. How curious it is, when gazing at photographs of forty years ago, to realise the contrast between the scene as one remembers it and the scene as recorded by the camera at the time. I can vividly recall the bright May morning of King Edward's funeral, the sight 'of the crowds massing along the pavements, the cries of the pro- /gramme-vendors in the streets. The whole scene is as fresh in my memory, and as contemporaneous, as if I were recalling an event

which happened in May of 1947. Yet the photographs as I gaze I upon them depict a vanished world. All the men are dressed in

Isuits that button high ; they wear stiff white collars and starched cuffs ; there are bowlers on their heads. The women have enormous

hats and the skirts are hobbled round the knees. The carriages and • motor-cars seem as old-fashioned as cabriolets or curricles, and there is a high wooden erection around the Victoria Memorial, still un- 'veiled. What to my memory seems but yesterday appears from the photographs to illustrate something that occurred in 1856.

As I turned the pages of the album, so devoutly preserved by this Republican widow of Dayton, Ohio, I came across a complete copy of The Times newspaper for Saturday, May 21st, 191o. It gave a detailed account of the funeral procession in London and Windsor with a list of all the foreign delegations. There (squeezed, I regret to say, towards the bottom of the list) I came across my own name. " The Eleutherian Republic," I read, " Monsieur Mardi and Mon- sieur Vendredi: Mr. H. Nicolson." I invent the names of the Eleutherian Republic and of her two distinguished representatives being anxious not to cause offence. Monsieur Mardi was the Republic's representative in London, and Monsieur Vendredi served in a similar capacity in Paris. The Republic, wishing to accord all honour to the memory of King Edward, had decided that she would be represented at his funeral by both. The Foreign Office had been asked by the Lord Chamberlain to attach to these minor delegations three or four of their junior clerks ; and I, being the most junior of all these clerks, was attached to what, when we consider the galaxy of crowned heads present at the funeral, was a very minor delegation. It was the first diplomatic task that I had been accorded ; it was also the most distressing. The Eleutherian Republic, in designating these two envoys as her representatives, had omitted to establish which of them should take precedence over the other. Nor had it con- sidered, or perhaps known, that the personal relations between Monsieur Mardi and Monsieur Vendredi were darkened by intense, nay venomous, animosity. Monsieur Mardi's loathing for Monsieur Vendredi was of the blustering variety ; Monsieur Vendredi's hatred pf Monsieur Mardi was reptilian and sly.

My sufferings began when I had to accompany Monsieur Mardi to Victoria Station in order to welcome Monsieur Vendredi on his arrival from Paris. I had been told that for this initial ceremony I must obtain a carriage from the Royal mews, with a coachman and footman dressed in scarlet liveries. Not desiring to drive alone in such an equipage, I gave instructions that it should call for us at the Eleutherian Legation, and I made my way, in frock coat and top hat, to that residence in a cab. Monsieur Mardi and I thereupon drove to Victoria Station in state. He made it clear to me that, pn our return journey, he must sit on the right hand of the carriage

and Monsieur Vendredi on the left. When Monsieur Vendredi arrived he was greeted with becoming deference by myself but by Monsieur Mardi with indignation. On our reaching the carriage in the forecourt, a scene of the most ungainly embarrassment occurred. Each of the two coloured gentlemen refused to enter the carriage unless he sat on the right. We stood there arguing on the pavement, while the footman, with impassive contempt, continued to hold the door open for our entry. In the end I solved the problem by explaining that the British public would be deeply shocked if they observed the visiting delegate sitting on the left when driving from the station, even as they would be equally scandalised if on Friday, when we drove to Paddington, the Minister in London did not occupy the place of honour. Sulkily they entered the carriage, and we drove in thunderous silence to deposit Monsieur Vendredi at the Savoy. On the following day, when Monsieur Vendredi expressed a desire to visit the Tower of London, he was outraged by not being provided with a Royal carriage. I had to explain that all the King's horses were being given a complete rest in preparation for the morrow's ceremony.

My next predicament was the wreath. We had been told that if the delegations insisted on sending wreaths to the funeral, we must see to it that these wreaths were as small as possible. Monsieur Vendredi had brought with him from Paris an enormous packing-atse con- taining the largest wreath that I have ever seen. When deposited in the dining-room at the Eleutherian Legation it filled the whole room. It consisted entirely of beads of varying sizes and colours and had attached to it a vast ribbon or streamer bearing the words " A Edouard VII. La Republique Eleutherienne Reconnaissante." I had to tell Monsieur Vendredi that we could not, and must not, take this wreath to Windsor. Monsieur Mardi was totally unable to conceal his jubilation at his colleague's discomfiture. Monsieur Vendredi, for his part, said that he would complain to Sir Grey. The morning of May loth dawned with gentle sunlight, and already the great black crowds were massed along the route of the procession. I fetched my two delegates at their respective residences. Monsieur Mardi was dressed in a uniform reminiscent of that worn by Toussaint L'Ouverture ; Monsieur Vendredi had dressed himself in a uniform which I suspect to have been of his own design. As we drove to Paddington Monsicur*Mardi, on the right, waved his plumed hat rapturously to the assembled multitude ; Monsieur Vendredi replied to their plaudits with less expansive exuberance ; throughout the drive his hand remained firmly at the salute. "Ce brave Mardi," he remarked to me as we walked up the platform at Paddington Station, "il n'est pas homme du monde." From the station at Windsor we walked in slow procession to St. George's Chapel. Monsieur Mardi felt the heat terribly. He wiped his black and shining face with a huge bandanna handkerchief. Monsieur Vendredi, observing him, raised his eyebrows at such banausic conduct.

After the funeral we all went to the Castle, where we were regaled with sandwiches and glasses of champagne. Monsieur Mardi had far too much champagne and insisted, during our return journey, in engaging Mr. Theodore Roosevelt in conversation. Thereafter, to my relief, he relapsed into slumber, punctuated by sudden regurgita- Lions. Our drive back from Paddington was again an unhappy experience. "Look at the blacks! " shouted a voice in the crowd. "Qu'est ce qu'ils disent ?" Monsieur Vendridi asked. " They're coming back! " I answered with true diplomatic finesse. It was a happy morning for me when at last I saw Monsieur Vendredi into the train for Paris. And Monsieur Mardi, I am glad to say, was never seen by me again. The shame and anxiety of that, my first diplomatic mission, lives vividly in my memory. But all The Tittles has to say about it is: " Monsieur Vendredi and Monsieur Mardi: Mr. H. Nicolson."