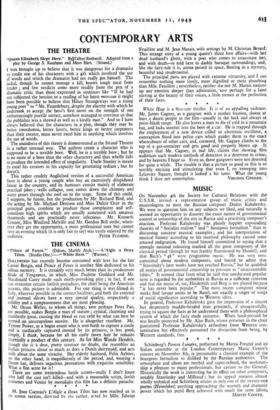 HOLLYWOOD has recently become consumed with love for the late Caesar Borgia, and Prince of Foxes is another film dedicated to his odious memory. It is certainly very much better than its predecessor Bride of Vengeance, in which Miss Paulette Goddard and Mr. Macdonald Carey made such mirth-provoking play ; in fact, if one can overcome certain foolish prejudices, the chief being the American accents, this picture is admirable. For one thing it was filmed in Italy, wherever possible in the correct localities, and both the external and internal decors have a very special quality, respectively a solidity and a sumptuousness that are most pleasing. Mr. Orson Welles, to whom all things, save perhaps Peter Pan, are possible, makes Borgia a man of stature • cynical, charming and manifestly great, causing the blood to run cold by what can best be termed an unscrupulous suavity. He is altogether excellent Mr. Tyrone Power, as a bogus count who is sent forth to capture a castle and is cardiacally captured instead by its princess, is less good, simply, I think, because for all his curly raven hair he remains essentially a product of this century. As for Miss Wanda Hendrix, though she is a dear, pretty creature no doubt, she resembles an Italian princess about as much as does a Dutch dairymaid, and acts with about the same vivacity. Her elderly husband, Felix Aylmer, on the other hand, is magnificently of the period, and, wearing a Dante hat, delivers sagacious perorations with exquisite sensibility. What a fine actor he is!

There are some tremendous battle scenes—really I don't know why half the cast isn't killed—and with a reasonable script, lavish costumes and Venice by moonlight this film has a definite panache. * * * * M. Jean Cocteau's L'Aigle a Deux Tires has now reached us in its screen version, directed by the author. acted by Mlle. Edwige Feuillere and M. Jean Marais, with settings by M. Christian Berard: This strange story of a young queen's three love affairs—with her dead husband's ghost, with a poet who comes to assassinate her, and with death—is told here in darkly baroque surroundings, and, like the fairy-tale it is, seems poised in space, floating in a mystery, beautiful and insubstantial.

The principal parts are played with extreme virtuosity, and I can remember nothing more lovely, more dignified or more absorbing than Mile. Feuillere ; nevertheless, neither she nor M. Marais conjure up any emotion deeper than admiration, save perhaps for a faint stirring at the beauty of their voices, a little tremor at the perfection of their faces. * *

White Heat is a first-rate thriller. It is of an appalling violence. Mr. James Cagney, as a gangster with a mother fixation, shoots at least a dozen people in the film—usually in the back and always at point-blank range. He also leaves a man to die of cold in a mountain hut, and locks another into the boot of a car. He is trapped through the employment of a new device called an electronic oscillator, a contraption fitted into police cars which guides them to the exact whereabouts of other cars, and, cornered, Mr. Cagney climbs to the top of a gas-container and gets good and properly blown up. It appears that Mr. Cagney, in real life, claims that showing film audiences such modern methods of detection is a deterrent to crime, and by heavens I hope so. Even so, these gangsters were not deterred, for quite a while. The trouble is that a picture as good as this is so terribly exciting and stimulating that even I, on emerging into Leicester Square, thought it looked a bit tame. What the young