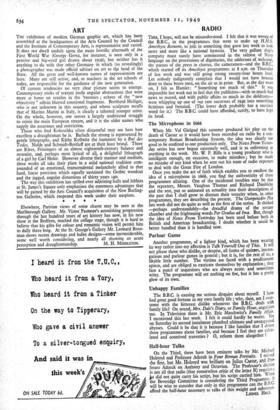 Half-hour Talks On the Third, there have been eminent talks-

Mr. Michael Holroyd and Professor Adcock in Four Roman Portraits. I missed the first, but Mr. Holroyd was brilliant on Julius Caesar, and Pro. fessor Adcock on Anthony and Octavian. The Professor's diction is not all that radio (that remorseless critic of the letter R.) requires ; ate did not quite carry his script, but his script carried him. When the Beveridge Committee is considering the Third Programme. it will be wise to consider that only in this programme can the B.B.C. afford the half-hour necessary to talks of this weight and substance. LIONEL HALE.