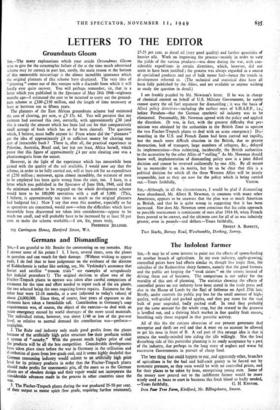 Sig,—The many explanations which your article Groundnuts Gloom tries to give for the catastrophic failure of the at the time much advertised scheme may be correct in part but, surely, the main reason at the bottom of this memorable miscarriage is the almost incredible ignorance which the original planners of this scheme have displayed. The very idea of " planning " comes out of this venture with a discredit from which it will hardly ever quite recover. You will perhaps remember, sir, that in a letter which you published in the Spectator of May 28th 1948—eighteen months ago—I estimated the cost to be incurred to carry out the ground- nuts scheme at £100-£150 million, and the length of time necessary at least at between ten to fifteen years.

The planners of the East African groundnuts scheme had estimated the cost of clearing, per acre, at £3 17s. 4d. You will perceive that my estimate had assessed this cost, correctly, with approximately £30 (and this is exactly the amount which has been laid out for that comparatively small acreage of bush which has so far been cleared). The question which, I believe, must baffle anyone is: From where did the "planners " get the idea of approximately £4 as sufficient money for clearing one acre of intractable bush ? There is, after all, the practical experience in Palestine, Australia, Brazil and, last but not least, Africa herself, which prove that this figure of approximately £4 per acre clearing cost was a phantasmagoria from the outset.

However, in the light of the experience which has meanwhile been gained with the quality of the soil available, I would now say that the scheme, in order to be fully carried out, will at least ask for an expenditure of £250 million ; moreover, again almost incredibly, the estimate of men to be employed has been quite wrong from the start, too. I have, in a letter which you published in the Spectator of June 18th, 1948, said that the minimum number to be engaged on the whole development scheme would have to be 100,000 operatives with a staff of 5,000. (This, I believe, is approximately ten times as much as the original planners had budgeted for.) Now I say that even this number, especially so far as operatives are concerned, would now—when the difficulties which have meanwhile been discovered are taken into consideration—appear to be much too small, and will probably have to be increased by at least 50 per cent, to make the scheme workable.—I am, Sir, yours truly,