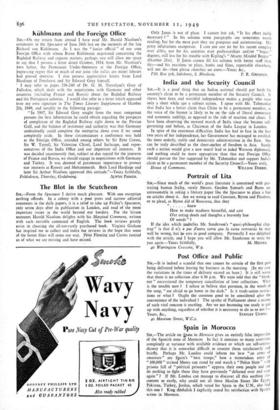 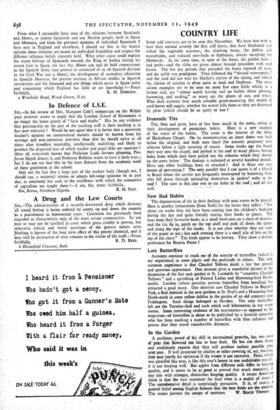 Stn,—The article on ,Spain in Morocco gives an entirely false impression of the Spanish zone of Morocco. In fact it contains so many assertions completely at variance with available evidence or which are self-contra- dictory that it is somewhat difficult to counter them satisfactorily and briefly. Perhaps Mr. Landau could inform me how "an army of amateurs" are Spain's " best troops," how a tremendous army of " 100,000" trained Moors can stand by and watch a "Police State" with prisons full of " political prisoners " oppress their own people and yet do nothing to fight those they have previously "defeated over and over again" ? If Mr. Landau can manage to discover all this seething dis- content so easily, why could not all those Muslim States like Egypt, Pakistan, Turkey, Jordan, which voted for Spain in the U.N., also find, this one ? King Abdullah I explicitly stated his satisfaction with Spain action in Morocco. From what I personally have seen of the relations between Spaniards and Moors, or indeed Spaniards and any Muslim people, both in Spain and Morocco, and from the personal opinions of individual Spaniards I have met in England and elsewhere, I should say that in my honest opinion those relations are based on individual friendship and respect for different religious beliefs sincerely held. What other cause could explain the warm feelings of Spaniards towards the King of Jordan during his recent visit to Spain, the fact that Moors can and do hold commissions in the Spanish Army (one general in command of an all-Spanish division in the Civil War was a Moor), the development of secondary education in Spanish Morocco, the present increase in African studies in Spanish universities and the thousand and one things which occur in Spain today and concerning which England has little or no knowledge ?—Yours