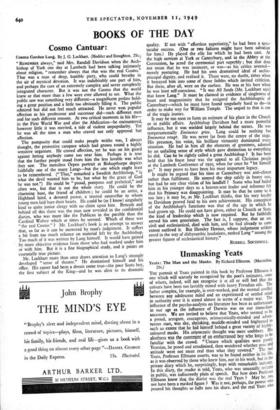 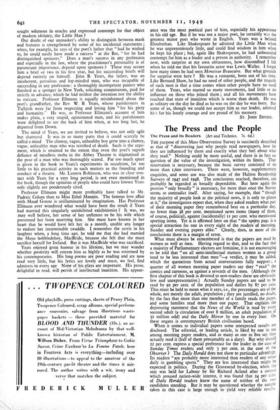 Yeats: The Man and the Masks. By Richard Ellmann. (Macmillan 21s.)

THE portrait of Yeats painted in this book by Professor Ellmann is one which will scarcely be recognised by the poet's intimates, some of whom, indeed, will not recognise it at all or will feel that the colours have been too lavishly mixed with heavy Freudian oils. The father complex, for example, is over-worked, and the normal conflict between any adolescent mind and an experienced or settled mind in authority over it is stated almost in terms of a major war. The influence of the psycho-analysts on literature has been as unfortunate in our age as the influence of Darwin was on our immediate ancestors. We are invited to believe that Yeats, who seemed to be a proud, arrogant, courageous, aristocratically-minded and adven- turous man, was shy, shrinking, muddle-minded and frightened to such an extent that he hid himself behind a great variety of highly- coloured masks. His aristocratic thought was mere snobbery. Ihs aloofness was the constraint of an embarrassed boy who longs to be familiar with the crowd. " Unsure which qualities were purely Yeatsian, he posed and attudinised, then wondered whether pose and attitude were not more real than what they covered." The real Yeats, Professor Ellmann asserts, was to be found neither in his life, as it was observed by those who knew him, nor in his work, but in the private diary which he, surprisingly, kept with remarkable industry. In this diary, the reader is told, Yeats, who was unusually reticent in public, was indiscreetly plain of speech. But how does Professor Ellmann know that the diarist was the real Yeats ? May he, too, not have been a masked figure ? Was it not, perhaps, the poseur who poured his thoughts so fully into his diary, and the real Yeats who

sought solutions in oracles and expressed contempt for that object of modern idolatry, the Little Man ? Our doubt of our unmasker's ability to distinguish between mask and features is strengthened by some of his incidental statements ; when, for example, he says of the poet's father that " had he wished to, he could easily have made a success " at the Bar, " for he had distinguished sponsors." Does a man's success in any profession and especially in the law, where the practitioner's personality is of paramount importance, depend upon sponsors ? These may secure him a brief or two in his first year, but his succeeding briefs will depend entirely on himself. John B. Yeats, the father, was an incoherent, garrulous and lop-minded man, who was incapable of succeeding in any profession : a thoroughly incompetent painter who finished as a sponger in New York, soliciting commissions, paid for strictly in advance, which he had neither the intention nor the ability to execute. Professor Ellmann is equally misinformed about the poet's grandfather, the Rev W. B. Yeats, whose parishioners in Tullyish were far from respecting and loving him " for his piety and humanity." He was, as Professor Ellmann's account of him makes plain, a very stupid, opinionated man, and his parishioners were delighted to see the back of him when, at too long last, he departed from Down.

The mind of Yeats, we arc invited to believe, was not only split but shattered It was in so many parts that it could scarcely he called a mind The clumsy, vague, unhealthy boy grew into a clumsy, vague, unhealthy man who was terrified of death. Such is the argu- ment, which is strained to the extent that even the poet's superb defiance of mindless mobs in the Abbey Theatre is stigmatised as the pose of a man who was thoroughly scared. Far too much space is given in the book to Yeats's experiments in occultism, far too little to his practical activity in such matters as the founding and conduct of a theatre. Mr. Lennox Robinson, who was in close con- tact with Yeats for a very long period, is not even mentioned in the book, though the opinions of people who could have known Yeats only slightly are ponderously cited.

Professor Ellmann might more profitably have talked to Mr. Padraic Colum than to Miss Ethel Mannin. The famous love affair with Maud Gonne is unillurninated by imagination. Has Professor Ellmann ever wondered what would have been the result if Yeats had married this singularly uninhibited exhibitionist ? It was, we may well believe, her sense of her unfitness to be his wife which prevented her from marrying him. She must have known in her heart that he would have left her in a month, unable any longer to endure her interminable twaddle. I remember the scorn in his laughter when, a long time ago, he told me that she had married the Mayo hobbledehoy, MacBride, because she felt that she must sacrifice herself for Ireland. But it was MacBride who was sacrificed.

Yeats enjoyed great honour in his lifetime, but we may wonder whether posterity will esteem him as highly as he was esteemed by his contemporaries. His long poems arc poor reading and are now read very little, but his lyrics are lovely and must, we feel, find admirers in every age None of his plays are important. His prose, delightful to read, will perish of intellectual inanition. His appear-

ance was the most poetical part of him, especially his appearance in his old age. But if he was not a major poet, he certainly was the greatest minor poet who wrote in English. Yeats was a belated Elizabethan. Like Shakespeare he admired the Little Man when he was unpretentiously little, and could find wisdom in him when he kept his place ; but, again like Shakespeare, he had unbounded contempt for him as a leader and a person in authority. I remember now, with surprise at my own obtuseness, how discomfited I felt when he told me that his favourite actor was Lewis Waller. I forget how many times he had seen Monsieur Beaucaire. But what grounds for surprise were here ? He was a romantic, born out of his time. Like Bernard Shaw, he had no need of other people, and the tragedy of such men is that a time comes when other people have no need of them. Yeats, who started so many movements, had little or no influence on those who joined them ; and all his movements have reached that state of inanition which is worse than death. He was as solitary on the day he died as he was on the day he was born. But some of us, though we could not accept him as our leader, admired hire for his lonely courage and are proud of his memory.