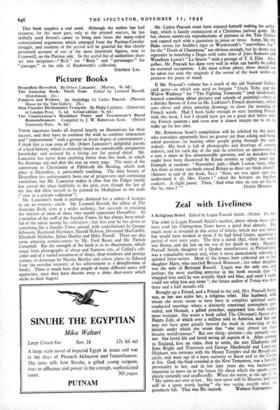 THE rebel is Logan Pearsall Smith's mother, about whom those wh, have read his Unforgotten Years know a good deal already. But much more is revealed in this series of letters, which her son edited but would have worked at more if he had lived longer, spanning .! period of over sixty years. The first is dated 1847, when the writ::: was fifteen, and the lait on the eve of her death in 1911. Hann3.1 Pearsall Smith, daughter of a Quaker manufacturer in Philadelphi, was a remarkable woman and, what is most immediately relevant, 3 spirited letter-writer. Most of the letters here collected are to her daughter Mary, who married Bernard Berenson ; her other daughter was the wife of Bertrand Russell. Logan was the only son, and perhaps the most startling sentence in the book records that " whipped him until he was actually black and blue, and until I really could not whip him any more "; the future author of Trivia was the three and a half months old.

Brought up a Friend, and a Friend to the end, Mrs. Pearsall Smith was, as her son styles her, a religious rebel. Her husband, with whom she never seems to have been in complete spiritual unit)', conducted meetings where a distinctly emotional atmosphere pre- vailed, and Hannah, a gifted preacher, supported him with rather more restraint. She wrote a book called The Christian's Secret of c Happy Life, of which over a million sold in America, and her son may not have gone greatly beyond the mark in observing of the initials under which she wrote that "one may almost say thee became world-famous." But one thing—pietistic—she certainly V"' not. She loved life and loved seeing all aspects of it. After coming to England, first on visits, then to settle, she met Gladstone and John Bright and Tennyson and George Macdonald and Laurence Oliphant, was intimate with the Mount Temples and the Broadlandl circle, and went out of a keen curiosity to Ascot and to the Casin's at Aix. God, the God revealed in the New Testament, was a familim personality to her, and in her later years she was increasingly impatient to move on to the future life about which she speaks COM' pletely naturally and unaffectedly. When she wrote, at the age of 71. " My sprees are over at last. My next spree will be Heaven, and th.e will be a spree worth having" she was saying exactly what •h; genuinely felt. That was.lrer outlook. WARREN Posratuncr.