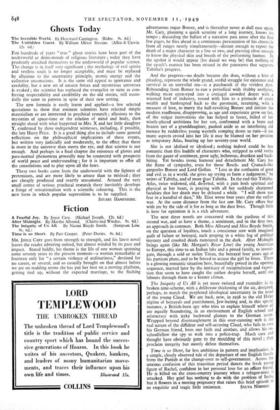 Time is so Short. By Parr Cooper. (Peter Davies. 8s. 6d.) MR. JOYCE CARY goes from strength to strength, and his latest novel leaves the reader admiring indeed, but almost winded by its pace and impact. Stated baldly, his theme is the life of one woman spanning some seventy years to the present moment—a woman remarkable at fourteen only for " a certain violence of ordinariness," destined for no career, or several, and so casually brought on that almost before we are on nodding terms she has put her foot on a moving platform, getting tied up, without the expected marriage, to the flashing adventurous rogue Bonscr, and is thereafter never at dull ease again. Mr. Cary, planning a quick scrutiny of a long journey, knows his tempo ; discarding the ballast of a narrative past tense after the first few pages, he flies ahead in a continuous presentation of his chronicle from all ranges nearly simultaneously—distant enough to report the death of a major character in a line or two, and pressing close enough to know the physical skin and breath of the performing human. In the upshot it would appear (for dazed we may be) that nothing of the epoch's essence has been missed in the panorama that supports Tabitha's progress.

And the progress—no doubt because she does, without a hint of pleading, represent the whole grand, sordid struggle for existence and survival in an unrestful era—is a patchwork of the vividest dyes. Rebounding from Bonser to run a periodical with shabby aesthetes, walking more open-eyed into a conjugal crowded desert with a wizened lord of industry, tossed with him to a pinnacle of crazy wealth and bankrupted back to the pavement, returning, with a measure of love, to marry the half-revolting Bonser and initiate the modern roadhouse, disapproving, as age and experience grow on her, of the vulgar innovations she has helped to foster, foiled of her wisely-placed ambitions for her son, confronted with a born and brazen tart of a granddaughter, pushed aside as an interfering old menace by rudderless young wastrels romping down to ruin—if too many aspects crowd into her life it may be blamed on her position as temporary Atlas, bearing up her seventy-year world.

She is not idolised or idealised ; nothing indeed could be less romantic than this huddle of characters who, stripped to cold verity from the gauze of sentiment, grow ugly, lecherous, drunken and back- biting. Yet besides ironic humour and detachment Mr. Cary has the flame of sympathy, even for those Bosch- and Cranach-like gargoyles Bonser and Lord Gollan. " Lost in the confusion of good and evil as in a world, she gives up trying to form a judgement," he writes of Tabitha, and of more ‘tan Tabitha. In the end this Tabitha- Atlas, twice widowed, old, deserted, with a pain both spiritual and physical at her heart, is praying with all her suddenly sharpened faculties that her death may be delayed a while. " I will show you fear in a handful of dust," Mr. Eliot wrote four years after the earlier war. At the same distance from the last one Mr. Cary offers fear with joy by the side of it for as long as the dust lives. Though little is here for optimism it is a rich adventure.

The next three novels are concerned with the purlieus of this second war, and so have a theme, a sentiment, and in the first two, an approach in common. Both Miss Albrand and Miss Royde Smith, on the question of loyalties, touch a conscience sore with imagined guilt of failure or betrayal, each groping in a white fog of political mystery and crooked deeds rumoured in the, dark. After Midnight brings again (like Mr. Morgan's River Line) the young American to Europe, this time to an Italian lake and a proud family, to investi- gate, through a sold or stolen Titian, the betrayal four years ago of his partisan plans, and to be forced to accuse the girl he loves. There is a glowing romantic situation here, beautifully poised in the opening sequence, marred later by the intricacy of recapitulation and exposi- tion that seem to have caught the author despite herself, until she labours through them to a keener climax.

The Iniquity of Us All is yet more twisted and recondite in its broken time-scheme, with a deliberate thickening of the air, designed, perhaps, to match the perplexed ideological uncertainty in the mind of the young Claud. We are back, now, in 1938 to the old Hitler regime of betrayals and punishment, Jew-baiting and, in this special instance, a British-born spy who tries to explain himself where all are equally floundering, in an environment of English school and aristocracy with jerky backward glances to the German scene. Wrapped beyond disentanglement in this over-cunning web is the real nature of the diffident and self-accusing Claud, who fails to save his German friend, loses one faith and another, and allows his ex- schoolfellow the spy to walk into a police-trap. Much care and thought have obviously gone to the moulding of this novel ; they proclaim integrity but mostly defeat themselves.

Time is so Short, far less ambitious in pattern and implication. is a simple, closely observed talc of the departure of one English family from the Punjab at the change-over to self-government. Across the anxious confusion of this transition period dances the fresh young figure of Rachel, confident in her personal love for an officer friend. He is killed on the cross-country journey when a refugee-tram I' attacked. Hcr grief has nothing to do with the problem of India. but it flowers in a moving poignancy that raises this brief episode to an exquisite and tragic little eminence. SYLI/A NORMAN