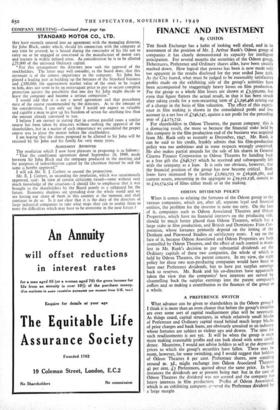 By CUSTOS THE Stock Exchange has a habit of looking well ahead, and in its assessment of the position of Mr. J. Arthur Rank's Odeon group of companies it has clearly demonstrated its capacity for intelligent

anticipation. For several months the securities of the Odeon group, Debentures, Preference and Ordinary shares alike, have been steadily marked down. How logical that process has been is now made only too apparent in the results disclosed for the year ended June 25th. As the City feared, what must be judged to be reasonably satisfactory profits made on the exhibiting side of the group's activities have been accompanied by staggeringly heavy losses on film production. For the group as a whole film losses are shown at £3,350,000, but even that figure flatters the actual result, in that it has been struck after taking credit for a non-recurring item of £1,296,466 arising out of a change in the basis of film valuation. The effect of this experi- ence in film making is shown in the consolidated profit and loss account in a net loss of £746,747, against a net profit for the preceding year of £4,175,732.

For shareholders in Odeon Theatres, the parent company, this is a dismaying result, the more so because the financial stake held by this company in the film production end of the business was acquired from Mr. Rank only as recently as December, 1947. Mr. Rank, it can be said to his credit, frankly admits that his film-production policy was too ambitious and in some respects wrongly conceived. He also makes partial amends for the sale of his shares in General Cinema Finance Corporation to Odeon Theatres by handing back as a free gift the £648,757 which he received and subsequently left with the company as a loan. It is only too obvious, however, that the financial position of the group has now become critical. Bank loans have increased by a further £2,693,723 to £16,936,58t, and current assets, amounting in the aggregate to £19,501,138, consist as to £10,574,524 of films either made or in the making.

When it comes to relating the fortunes of the Odeon group to the various companies, which are, after all, separate legal and financial entities, the problem for the investor is none too easy. On the face of it, companies such as Odeon Associated Theatres and Odeon Properties, which have no financial interests on the producing side, should be much better placed than Odeon Theatres, which has a large stake in film production, and British and Dominions Film Cor- poration, whose fortunes primarily depend on the letting of the Denham and Pinewood Studios at satisfactory rents. I say on the face of it, because Odeon Associated and Odeon Properties are both controlled by Odeon Theatres, and the effect of such control is mani- fest in Mr. Rank's decision to pay substantial dividends on the Ordinary capitals of these two companies, the whole of which is held by Odeon Theatres, the parent concern. In my view, the right policy for these two non-producing companies would have been to have met Preference dividends, but to have put surplus earnings back to reserves. Mr. Rank and his co-directors have apparently taken the view that the companies' best interests are served by channelling back the surplus earnings into the parent company's coffers and so making a contribution to the finances of the group as a whole.

What advance can be given to shareholders in the Odeon group ? I think it is more than an even chance that before the group's troubles are over some sort of capital readjustment plan will be necessary. As things stand, capital structures, in which relatively small blocks of Preference and Ordinary capital stand behind much larger blocks of prior charges and bank loans, are obviously unsuited to an industry whose fortunes are subject to violent ups and downs. The time for such readjustments is not yet. It will be when the group is once more making reasonable profits and can look ahead with some confi- dence. Meantime, I would not advise holders to sell at the depressed prices to which the group's securities have fallen. There may he room, however, for some switching, and I would suggest that holders of Odeon Theatres 6 per cent. Preference shares, now standing around 9s. 3d., might exchange into Odeon Associated Theatres 41 per cent. Li Preferences, quoted about the same price. In both instances the dividends are at present being met but in the case of Odeon Theatres the dividend was not earned and the company hat heavy interests in film production. Profits of Odeon Associated. which is an exhibiting company. v-vered the Preference dividend by a large margin