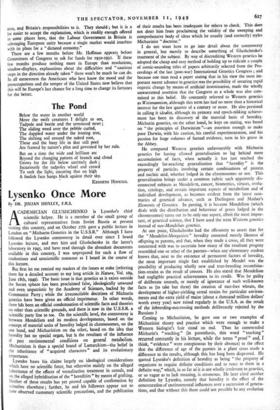 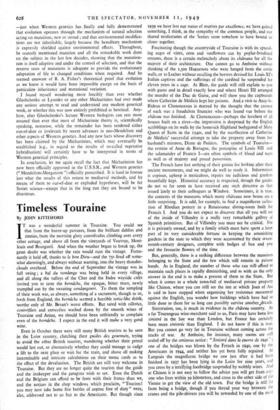 ACADEMICIAN GLUSHCHENKO is Lysenko's chief scientific helper. He is a member of the small group of cultural representatives from Soviet Russia at present visiting this country, and on October z7th gave a public lecture in London on "Michurin Genetics in the U.S.S.R." Although I have followed the Lysenko controversy in detail ever since I heard Lysenko lecture, and met him and Glushchenko in the latter's laboratory in 1945, and have read through the abundant documents available in this country, I was unprepared for such a flow of tendentious and unscientific nonsense as I heard in the course of this lecture.

But first let me remind my readers of the issues at stake (referring them for a detailed account to my long article in Nature, Vol. 169, June 18th, 1949). The basic issue is that genetics as it exists outside the Soviet sphere has been proclaimed false, ideologically unsound and even unpatriotic by the Academy of Sciences, backed by the Communist Party ; while the irreconcilable doctrines of Michurin genetics have been given an official imprimatur. In other words, there hAs been an official condemnation of scientific facts and theories on other than scientific grounds, and there is now in the U.S.S.R. a scientific party line to toe. On the scientific level, the controversy is between Mendelism and its modern developments, based on the concept of material units of heredity lodged in chromosomes, on the one hand, and Michurinism on the other, based on the idea that heredity has no special organ, but Is the resultant of the influence of past environmental conditions on general metabolism. Michurinism is thus a special brand of Lamarckism—the belief in the inheritance of "acquired characters" and its evolutionary importance.

Lysenko bases his claims largely on ideological considerations which have no scientific force, but otherwise mainly on the alleged inheritance of the effects of vernalisation treatment in cereals, and on the alleged hybridisation of the " heredities " by means of grafting. Neither of these results has yet proved capable of confirmation by scientists elsewhere ; further, he and his followers appear not to have observed 'customary scientific precautions, and the publication of their results has been inadequate for others to check. This does not deter him from proclaiming the validity of the sweeping and comprehensive body of ideas which he usually (and correctly) styles Michurinist " doctrine."

I do not want here to go into detail about the controversy in general, but merely to describe something of Glushchenko's treatment of the subject. By way of discrediting Western genetics he adopted the cheap and easy method of holding up to ridicule a couple of comic-sounding titles of papers arbitrarily selected from the Pro- ceedings of the last (post-war) International Genetics Congress ; and because one man read a paper stating that in his view the most im- portant recent advance in genetics was the possibility of securing rapid eugenic change by means of artificial insemination, made the wholly unwarranted assertion that the Congress as a whole was also com- mitted to this belief. He constantly referred to Western genetics as Weismannism, although this term has had no more than a historical interest for the last quarter of a century or more. He also persisted in calling it idealist, although its primary and epoch-Making achieve- ment has been its discovery of the material basis of heredity.

Michurin genetics, on the other hand, he kept on stating, was based on " the principles of Darwinism "—an assertion enough to make poor Darwin, with his caution, his careful experimentation, and his passion for huge volumes of factual evidence, turn in his grave in the Abbey.

He compared Western genetics unfavourably with Michurin gcnctics for having allowed generalisation to lag behind mere accumulation of facts, when actually it has just reached the exceedingly far-reaching generalisation that " heredity " is the property of particles involving certain combinations of protein and nucleic acid, whether lodged in the chromosomes or not. This generalisation brings under a common rubric such apparently dis- connected subjects as Mendeli.rn, cancer, biometrics, viruses, evolu- tion, cytology, and certain important aspects of metabolism and of individual development, as becomes evident from the latest sum- maries of genetical advance, such as Darlington and Mather's Elements of Genetics. In passing, it is because Mendelism (which deals with the distribution and behaviour of genes lodged in the chromosomes) turns out to be only one aspect, albeit the most impor- tant, of genetical science, that I have used the term Western genetics instead of neo-Mendelian genetics.

At one point, Glushchenko had the effrontery to assert that for the " Mendelist-Morganists " heredity connoted merely likeness of offspring to parents, and that, when they made a cross, all they were concerned with was to ascertain how many of the resultant progeny resembled one or other of the parents—when any elementary student knows that, next to the existence of permanent factors of heredity, the most important single fact established by Mendel was the possibility of producing wholly new and true-breeding recombina- tion-strains as the result of crosses. He also stated that Mendelism had negligible practical achievements to its credit. Was he guilty of deliberate untruth, or merely of ignorance of such well-known facts as (to take but three) the creation of rust-free wheats, the development of higher-yielding cereal strains for particular environ- ments and the extra yield of maize (about a thousand million dollars' worth every year) now raised regularly in the U.S.A. as the result of the inbreeding-outcrossing methods deliberately rejected by the Russians ?

Corning to Michurinism, he gave one or two examples of Michurinist theory and practice which were enough to make a Western biologist's hair stand on end. Thus he commended

Michurin's " teaching " (in parenthesis, this word " teaching " recurred constantly in his lecture, while the terms " proof " and, I think, "evidence" were conspicuous by their absence) to the effect

that the difference of age of the parents in a plant cross made a difference to the results, although this has long been disproved. He quoted Lysenko's definition of heredity as being " the property of organisms to require definite conditions and to react to them in a definite way," which, in so far ai it is not wholly irrelevant to genetics, or so vague as to lack meaning, is erroneous. He later cited another definition by Lysenko, namely that heredity is the effect of the concentration of environmental influences over a succession of genera- tions, and that without this there could not possibly be any evolution —just when Western genetics has finally and fully demonstrated that evolution operates through the mechanism of natural selection acting on mutations, new or stored ; and that environmental modifica- tions are not inheritable, largely because the hereditary mechanism is expressly shielded against environmental effects. Throughout, he scarcely mentioned mutation and all the remarkable work done on the subject in the last few decades, showing that the mutation- rate is itself adaptive and under the control of selection, and that the reserve store of mutations is adequate to provide the evolutionary adaptation of life to changed conditions when required. And he seemed unaware of R. A. Fisher's theoretical proof that evolution as we know it would have been impossible except on the basis of particulate inheritance and mutational variation.

I found myself wondering more forcibly than ever whether Glushchenko or Lysenko or any other Michurinites had ever made any serious attempt to read and understand any modern genetical work, or whether this was now entirely prohibited as heretical. Any- how, after Glushchenko's lecture Western biologists can rest more assured than ever that most of Michurinite theory is, scientifically speaking, nonsense, while the remainder has been rendered either out-of-date or irrelevant by recent advances in neo-Mendelism and other aspects of Western genetics. And any new facts whose discovery has been claimed by the Michurinites, which may eventually be established (e.g., in regard to the results of so-called vegetative hybridisation) will certainly have to be interpreted in terms of Western genetical principles.

In conclusion, let me again recall the fact that Michurinism has now been officially approved in the U.S.S.R., and Western genetics (" Mendelism-Morganism ") officially proscribed. It is hard to foresee just what the results of this return to mediaeval methods, and by means of them to out-of-date or exploded hypotheses, will be for Soviet science—except that in the long run they are bound to be disastrous.