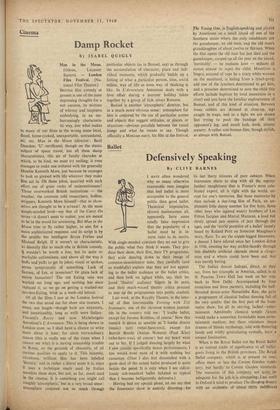 By ISABEL QUIGLY Man in the Moon.

(Odeon, Leicester Square). — London Film Festival. (Na- tional Film Theatre.) BRITISH film comedy at present is one of the most depressing thoughts for a wet autumn, its mixture of whimsy and ineptness embodying, in an em- barrassingly characteris- tic way, just what makes So many of our films in the wrong sense local, dated, hOme-cooked, unexportable, untranslated, etc. etc. Man in the Moon (director: Basil Dearden; `I.J' certificate), though on the elastic subject of space travel, has all these damp characteristics, this air of family charades at which, to be kind, we must try smiling; it even manages to make one irritated with the generally likeable Kenneth More, just because he manages to look so pleased with life whatever they make him act in. Oh those jokes, quarried with such effort out of great rocks of uninventiveness! Those overworked British institutions — the weather, the common cold researchers, boffins, strippers, Kenneth More himself—that in them- selves are thought to be a scream! At the most simple-minded level—say that of the Carry On series—it doesn't seem to matter, you are meant to be in the mood for screaming. But Man in the Moon tries to fly rather higher, to aim for a more sophisticated response, and its script is by the prolific but intelligent Bryan Forbes and Michael Re1ph. If it weren't so characteristic, so dismally like so much else in British comedy, ij wouldn't be worth a line; but its quite re- markable unfunniness, and above all the way it huffs and puffs to get its jokes, visual or spoken, seems symptomatic of something. Lack of fantasy, of fun, or invention? Or plain lack of native humorists? The old Ealing vein was worked out long ago, and nothing has since replaced it; so we go on getting a washed-out neo-nco-Ealing, brisk as a week-old lettuce.

Of all the films I saw at the London festival the two that stood out for sheer size (stature, I mean, not length—though both are extremely, and unnoticeably, long as well) were Italian: Visconti's Rocco and now Michelangelo Antonioni's L'Avventura. This is being shown in London soon, so I shall have a chance to write more about it later; for some extraordinary reason (this is really one of the times when I cannot see why) it is having censorship trouble in Rome, on the grounds of obscenity, of all curious qualities to apply to it. This leisurely, circuitous, brilliant film has been labelled literary,' and in rather a literal sense it is, since it uses a technique much' used by Italian novelists these days, but not, so far, much used in the cinema. It is something you might call roughly 'atmospheric,' but in a very broad sense: atmosphere conjured not so much through particular objects (as in Bunuel, say) as through the accumulation of character, place and indi- vidual moments, which gradually builds up a feeling of what a particular person, time, social milieu, way of life or even way of thinking is like. In L'Avventura Antonioni deals with a love affair during a summer holiday taken together by a group of rich, smart Romans.

Bunuel is another 'atmospheric' director, but in a much more obvious sense: atmosphere for him is conjured by the use of particular scenes and objects that suggest attitudes, or, places, or situations—obvious parallels between the visual image and what he means to say. Though officially a Mexican entry, his film at the festival, The Young One, is English-speaking and played by Americans on a small island off one of the Southern states where the only inhabitants are the gamekeeper, an old man, and the old man's granddaughter of about twelve or thirteen. When the film opens the old man has just died and the gamekeeper, cooped up all the year on the island, 'inevitably' — he explains later — seduces (it comes almost to rape) the child. Meantime a Negro, accused of rape by a crazy white woman on the mainland, is hiding from a lynch-gang; add one of the lynchers determined to get him, and a preacher determined to save the child (his efforts include baptism by total immersion in a river) and you have the familiar explosiveness of Bunuel, and of this kind of situation. Between times rabbits are skinned in close-up, legs caught in traps, and in a fight we are shown feet trying to push the bandage off their opponent's leg; and much lush, dank, steamy scenery. A rather anti-human film; though stylish, as always with Bunuel.