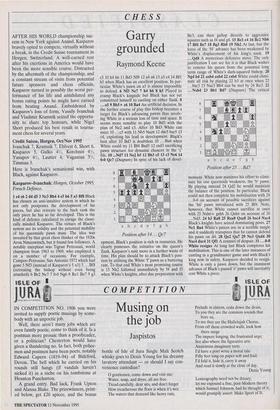 AFTER HIS WORLD championship suc- cess in New York against Anand, Kasparov bravely opted to compete, virtually without a break, in the Credit Suisse tournament in Horgen, Switzerland. A well-earned rest after his exertions in America would have been the more sensible course. Distracted by the aftermath of the championship, and a constant stream of visits from potential future sponsors and chess officials, Kasparov turned in possibly the worst per- formance of his life and annihilated any bonus rating points he might have earned from beating Anand. Emboldened by Kasparov's loss of form, Vassily Ivanchuk and Vladimir Kramnik seized the opportu- nity to share top honours, while Nigel Short produced his best result in tourna- ment chess for several years.

Here is Ivanchuk's sensational win, with Black, against Kasparov.

1 e4 e6 2 d4 d5 3 Nc3 Bb4 4 e5 b6 5 a3 1318 Black has chosen an anti-intuitive system in which he not only postpones the development of his pieces, but also retreats to the back rank the only piece he has so far developed. This is the kind of defence calculated to enrage the classi- cally minded Kasparov. The virtues of Black's system are its solidity and the potential mobility of his queenside pawn mass. The idea was invented by that great chess thinker of the 1920s Aron Nimzowitsch, but it found few followers. A notable exception was Tigran Petrosian, world champion from 1963 to 1969, who employed it on a number of occasions. For example, Campos—Petrosian, San Antonio 1972 which had gone 5 Nf3 (instead of Kasparov's 5 a3) 5 ...Bf8 (retreating the bishop without even being attacked) 6 Bet Ne7 7 0-0 Ng6 8 Rel Be7 9 g3

opment, Black's position is rich in resources. He clearly possesses the initiative on the queen's flank. Kasparov's next move is a further waste of time. His plan should be to attack Black's posi- tion by utilising the White 'f' pawn as a battering ram. To that end White's most promising course is 15 Nh2 followed immediately by f4 and f5 when White's knights, after due preparation with Be3, can then gallop directly to aggressive squares such as f4 and g4. 15 Rel c4 16 Bc2 Nb6 17 Bf4 Be7 18 Bg3 Rb8 19 Nh2 At last, but the force of the 'f4' advance has been weakened by White's displacement of his king's rook. 19 • Qd8 A mysterious defensive move. The only justification I can see for it is that Black wishes to remove his queen from the potential long term range of White's dark-squared bishop. 20 Ng4 b4 21 axb4 axb4 22 cxb4 White could elimi- nate all risk by playing 22 b3 at once when 22 bxc3 23 Nxc3 Bb4 can be met by 24 Re3. 22

• Nxb4 23 Bbl Bd7 (Diagram) The critical Position after 23 . . . Bd7 moment. White now mistimes his effort to elimi- nate his one queenside weakness, the 'b' pawn. By playing instead 24 Qd2 he would maintain the balance of the position. In particular, Black could not then complete his mobilisation with 24 ...0-0 on account of possible sacrifices against the `h6' pawn introduced with 25 Bf4. Note, however, that White cannot sacrifice at once with 25 Nxh6+ gxh6 26 Qxh6 on account of 26

Nd3. 24 b3 RaS 25 RxaS QxaS 26 bxc4 Nxc4 Black's knights have seized dominating posts. 27 Ncl Ba4 White's pieces are in a terrible tangle and it suddenly transpires that he cannot defend his pawn on d4. 28 Qe2 Qa7 29 Nei Qxd4 30 Nxc4 dxc4 31 Qfl A counsel of despair. 31 ...0-0 White resigns At long last Black completes his mobilisation. This is one of the later instances of castling in a grandmaster game and with Black's king now in safety, Kasparov decided to resign. White is only a pawn down, but the imminent advance of Black's passed 'c' pawn will inevitably cost White a piece.