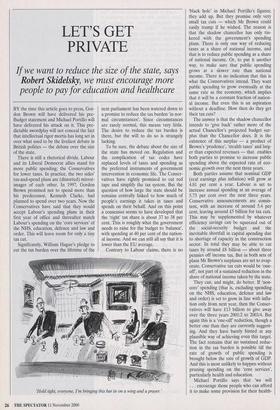 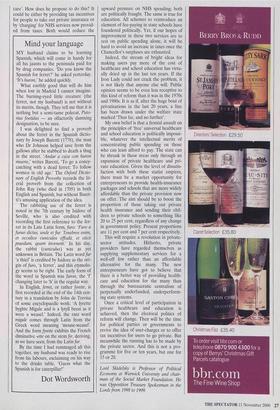 If we want to reduce the size of the state, says

Robert Skidelsky, we must encourage more

people to pay for education and healthcare

BY the time this article goes to press, Gor- don Brown will have delivered his pre- Budget statement and Michael Portillo will have delivered his attack on it. This pre- dictable swordplay will not conceal the fact that intellectual rigor mortis has long set in over what used to be the liveliest debate in British politics — the debate over the size of the state.

There is still a rhetorical divide. Labour and its Liberal Democrat allies stand for more public spending; the Conservatives for lower taxes. In practice, the two sides' tax-and-spend plans are (distorted) mirror- images of each other. In 1997, Gordon Brown promised not to spend more than his predecessor, Kenneth Clarke, had planned to spend over two years. Now the Conservatives have said that they would accept Labour's spending plans in their first year of office and thereafter match Labour's spending on the 'core services' of the NHS, education, defence and law and order. This will leave room for only a tiny tax cut.

To be sure, the debate about the size of the state has moved on. Regulation and the complication of tax codes have replaced levels of taxes and spending as the preferred instruments of government intervention in economic life. The Conser- vatives have rightly promised to cut red tape and simplify the tax system. But the question of how large the state should be remains centrally linked to how much of people's earnings it takes in taxes and spends on their behalf. And on this point a consensus seems to have developed that the 'right' tax share is about 37 to 38 per cent. This is roughly what the government needs to raise for the budget to 'balance', with spending at 40 per cent of the nation- al income. And we can still all say that it is lower than the EU average.

Contrary to Labour claims, there is no Hold tight, everyone, I'm bringing this bar in on a wing and a prayer.' `black hole' in Michael Portillo's figures; they add up. But they promise only very small tax cuts — which Mr Brown could easily trump if he wished. The reason is that the shadow chancellor has only tin- kered with the government's spending plans. There is only one way of reducing taxes as a share of national income, and that is to reduce public spending as a share of national income. Or, to put it another way, to make sure that public spending grows at a slower rate than national income. There is no indication that this is what the Conservatives intend. They want public spending to grow eventually at the same rate as the economy, which implies that it will be a constant fraction of nation- al income. But even this is an aspiration without a deadline. How then do they get their tax cuts?

The answer is that the shadow chancellor intends to 'give back' rather more of the actual Chancellor's projected budget sur- plus than the Chancellor does. It is the existence of this surplus — a product of Brown's 'prudence', 'stealth taxes' and larg- er than expected revenues — that enables both parties to promise to increase public spending above the expected rate of eco- nomic growth over the next three years.

Both parties assume that nominal GDP (real earnings plus inflation) will grow at 4.81 per cent a year. Labour is set to increase annual spending at an average of 5.73 per cent over the next three years. Conservative announcements are consis- tent, with an increase of around 5.4 per cent, leaving around £5 billion for tax cuts. This may be supplemented by whatever efficiency savings can be squeezed out of the social-security budget and the inevitable shortfall in capital spending due to shortage of capacity in the construction sector. In total they may be able to cut taxes by around £8 billion — about three pennies off income tax. But in both sets of plans Mr Brown's surpluses are set to evap- orate. Conservative tax cuts would be 'one- off, not part of a sustained reduction in the share of national income taken by the state.

They can, and might, do better. If 'non- core' spending (that is, excluding spending on the NHS, education, defence and law and order) is set to grow in line with infla- tion only from next year, then the Conser- vatives will have £13 billion to give away over the three years 2001/2 to 2003/4. But again this is a 'one-off reduction, though a better one than they are currently suggest- ing. And they have barely hinted at any plausible way of achieving even this target. The fact remains that no sustained reduc- tion in the tax burden is possible till the rate of growth of public spending is brought below the rate of growth of GDP. And this is most unlikely to happen without pruning spending on the 'core services', particularly health and education.

Michael Portillo says that 'we will . . . encourage those people who can afford it to make some provision for their health- care'. How does he propose to do this? It could be either by providing tax incentives for people to take out private insurance or by 'charging' for NHS services now provid- ed from taxes. Both would reduce the upward pressure on NHS spending; both are politically fraught. The same is true for education. All schemes to reintroduce an element of fee-paying in state schools have foundered politically. Yet, if our hopes of improvement in these two services are to rest on public spending alone, it will be hard to avoid an increase in taxes once the Chancellor's surpluses are exhausted.

Indeed, the stream of bright ideas for making users pay more of the cost of healthcare and school education has virtu- ally dried up in the last ten years. If the Iron Lady could not crack the problem, it is not likely that anyone else will. Public opinion seems to be even less receptive to this kind of reform than it was in the 1970s and 1980s. It is as if, after the huge bout of privatisations in the last 20 years, a line has been drawn under the welfare state marked 'Thus far, and no further'.

My own belief is that a frontal assault on the principles of 'free' universal healthcare and school education is politically impossi- ble, whatever the intellectual merits of concentrating public spending on those who can least afford to pay. The state can be shrunk in these areas only through an expansion of private healthcare and pri- vate education. Given the level of dissatis- faction with both these statist empires, there must be a market opportunity for entrepreneurs to provide health-insurance packages and schools that are more widely affordable than the private provision now on offer. The aim should be to boost the proportion of those taking out private health insurance and sending their chil- dren to private schools to something like 20 to 25 per cent, regardless of any change in government policy. Present proportions are 11 per cent and 7 per cent respectively.

This will require a revolution in private- sector attitudes. Hitherto, private providers have regarded themselves as supplying supplementary services for a well-off few rather than an affordable alternative for the many. The new entrepreneurs have got to believe that there is a better way of providing health- care and education for the many than through the bureaucratic centralism of perpetually underfunded, underperform- ing state systems.

Once a critical level of participation in private healthcare and education is achieved, then the electoral politics of reform will change. Then will be the time for political parties or governments to revive the idea of user-charges or to offer tax incentives for users to go private. But meanwhile the running has to be made by the private sector. And this is not a pro- gramme for five or ten years, but one for 15 or 20.

Lord Ski.delsky is Professor of Political Economy at Warwick University and chair- man of the Social Market Foundation. He was Opposition Treasury Spokesman in the Lords from 1998 to 1999.