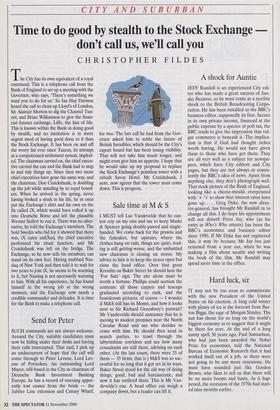 IT may not be too soon to commiserate with the new President of the United States on his election. A long cold winter with plenty of ice is the forecast from Bar- ton Biggs, the sage of Morgan Stanley. The sun has shone for so long on the world's biggest economy as to suggest that it might be there for ever. At the end of a long sunny spell 30 years ago, Paul Samuelson, who had just been awarded the Nobel Prize for economics, told the National Bureau of Economic Research that it had worked itself out of a job, as there were not going to be any more recessions. He must have sounded just like Gordon Brown, who likes to tell us that there will be no more booms and busts. As it hap- pened, the recession of the 1970s had start- ed nine months earlier.