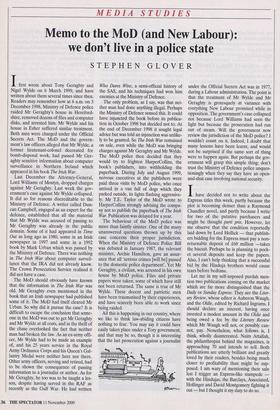 Memo to the MoD (and New Labour): we don't live in a police state

Ifirst wrote about Tony Geraghty and Nigel Wylde on 6 March 1999, and have written about them several times since then. Readers may remember how at 6 a.m. on 3 December 1998, Ministry of Defence police raided Mr Geraghty's house in Hereford- shire, removed dozens of files and computer disks, and arrested him. Mr Wylde and his house in Esher suffered similar treatment. Both men were charged under the Official Secrets Act. The MoD and the govern- ment's law officers alleged that Mr Wylde, a former lieutenant-colonel decorated for bomb-disposal work, had passed Mr Ger- aghty sensitive information about computer surveillance in Northern Ireland which appeared in his book The Irish War.

Last December the Attorney-General, Lord Williams of Mostyn, dropped charges against Mr Geraghty. Last week the gov- ernment's case against Mr Wylde collapsed. It did so for reasons discreditable to the Ministry of Defence. A writer called Dun- can Campbell, engaged as an expert for the defence, established that all the material that Mr Wylde was accused of passing to Mr Geraghty was already in the public domain. Some of it had appeared in Time Out as long ago as 1980, some in an Irish newspaper in 1997 and some in a 1992 book by Mark Urban which was passed by the Ministry of Defence. There was nothing in The Irish War about computer surveil- lance that the IRA did not already know. The Crown Prosecution Service realised it did not have a case.

The MoD should obviously have known that the information in The Irish War was old. Mr Geraghty even mentioned in the book that an Irish newspaper had published some of it. The MoD had itself cleared Mr Urban. So why did it pursue the case? It is difficult to escape the conclusion that some- one in the MoD was out to get Mr Geraghty and Mr Wylde at all costs, and in the thrill of the chase overlooked the fact that neither man had broken the law. As an ex-army offi- cer, Mr Wylde had to be made an example of, and his 25 years service in the Royal Army Ordnance Corps and his Queen's Gal- lantry Medal were neither here nor there. Other army officers, serving and retired, had to be shown the consequence of passing information to a journalist or author. As for Mr Geraghty, he too was to be taught a les- son, despite having served in the RAF as recently as the Gulf War. He had written Who Dares Wins, a semi-official history of the SAS, and his techniques had won him enemies at the Ministry of Defence.

The only problem, as I say, was that nei- ther man had done anything illegal. Perhaps the Ministry of Defence sensed this. It could have injuncted the book before its publica- tion in October 1998 but decided not to. At the end of December 1998 it sought legal advice but was told an injunction was unlike- ly to be granted. So The Irish War remained on sale, even while the MoD was bringing charges against Mr Geraghty and Mr Wylde. The MoD police then decided that they would try to frighten HarperCollins, the book's publishers, into withholding the paperback. During July and August 1999, nervous executives at the publishers were paid three visits by MoD police, who once arrived in a van full of dogs which they parked outside, its lights flashing aggressive- ly. Mr T.E. Taylor of the MoD wrote to HarperCollins strongly advising the compa- ny not to publish the paperback of The Irish War. Publication was delayed for a year.

The behaviour of the MoD police was more than faintly sinister. One of the many unanswered questions thrown up by this case concerns their proper jurisdiction. When the Ministry of Defence Police Bill was debated in January 1987, the relevant minister, Archie Hamilton, gave an assur- ance that all 'serious crimes [will be] passed to the domestic police department'. Yet Mr Geraghty, a civilian, was arrested in his own house by MoD police. Files and private papers were taken, some of which have still not been returned. The same is true of Mr Wylde. These decent and patriotic men have been traumatised by their experiences, and have scarcely been able to work since being raided.

All this is happening in our country, where we like to think law-abiding citizens have nothing to fear. You may say it could have easily taken place under a Tory government, and that may be so, though it is interesting that the last prosecution against a journalist under the Official Secrets Act was in 1977, during a Labour administration. The point is that the treatment of Mr Wylde and Mr Geraghty is grotesquely at variance with everything New Labour promised while in opposition. The government's case collapsed not because Lord Williams had seen the light but because the prosecution had run out of steam. Will the government now review the jurisdiction of the MoD police? I wouldn't count on it. Indeed, I doubt that many lessons have been learnt, and would not be surprised if the same sort of thing were to happen again. But perhaps the gov- ernment will grasp this simple thing: don't trust the Ministry of Defence police unques- tioningly when they say they have an open- and-shut case involving national security.

Ihave decided not to write about the Express titles this week, partly because the plot is becoming denser than a Raymond Chandler novel, and partly because I write for two of the putative purchasers and might be thought parti pris. However, let me observe that the condition reportedly laid down by Lord Hollick — that publish- ers bidding for the Express must pay a non- returnable deposit of £60 million —takes the biscuit. Perhaps he is planning to pock- et several deposits and keep the papers. Also, I can't help thinking that a successful bid by the Hinduja brothers would cause tears before bedtime.

Let me in my self-imposed purdah men- tion two publications coming on the market which are far more distinguished than the Daily or Sunday Express. They are the Liter- ary Review, whose editor is Auberon Waugh, and the Oldie, edited by Richard Ingrams. I should declare an interest, having once invested a modest amount in the Oldie and being owed a fee by the Literary Review which Mr Waugh will not, or possibly can- not, pay. Nonetheless, what follows is, I think, wholly disinterested. Naim Attallah, the philanthropist behind the magazines, is approaching 70 and intends to sell. Both publications are utterly brilliant and greatly loved by their readers, besides being much closer to profitability than might be sup- posed. I am wary of mentioning their sale lest I trigger an Express-like stampede with the Hindujas, the Barclays, Associated, Hollinger and David Montgomery fighting it out — but I thought it my duty to do so.