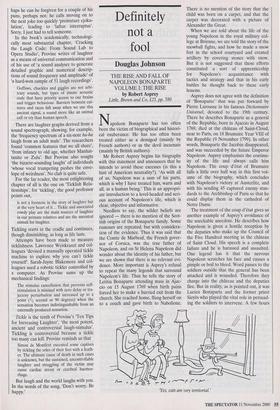 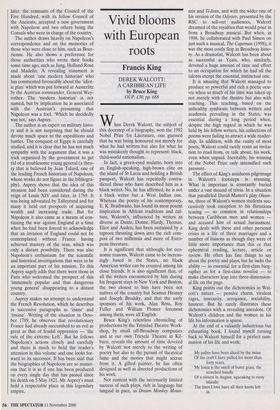 Definitely not a fool

Mr Robert Asprey begins his biography with this statement and announces that he intends to avoid these excesses (is this a hint of American neutrality?). 'As with all of us, Napoleon was a sum of his parts, which is why I have treated him, warts and all, as a human being.' This is an appropri- ate introduction to a level-headed and seri- ous account of Napoleon's life, which is clear, objective and informative.

Needless to say, the wilder beliefs are ignored — there is no mention of the Scot- tish origins of the Bonaparte family. Some rumours are repeated, but with considera- tion of the evidence. Thus it was said that the Comte de Marbeuf, the French gover- nor of Corsica, was the true father of Napoleon, and on St Helena Napoleon did wonder about the identity of his father, but we are shown that there is no relevant evi- dence. More important is Asprey's refusal to repeat the many legends that surround Napoleon's life. Thus he tells the story of Letitia Bonaparte attending mass in Ajac-. cio on 15 August 1769 when birth pains forced her to make a hurried exit from the church. She reached home, flung herself on to a couch and gave birth to Nabolione. There is no mention of the story that the child was born on a carpet, and that the carpet was decorated with a picture of Alexander the Great.

When we are told about the life of the young Napoleon in the royal military col- lege at Brienne, we are told the story of the snowball fights, and how he made a snow fort in the school courtyard and created artillery by covering stones with snow. But it is not suggested that these efforts constituted a sort of apprenticeship for Napoleon's acquaintance with tactics and strategy and that in his early battles he thought back to these early lessons.

Asprey does not agree with the definition of 'Bonaparte' that was put forward by Pierre Larousse in his famous Dictionnaire Universel, devoted to the 19th century. There he describes Bonaparte as a general of the Republic, born in Ajaccio in August 1769, died at the château of Saint-Cloud, near to Paris, on 18 Brumaire Year VIII of the Republic (9 November 1799). In other words, Bonaparte the Jacobin disappeared, and was succeeded by the future Emperor Napoleon. Asprey emphasises the continu- ity of the life and always calls him Napoleon. The coup d'etat of Brumaire falls a little over half way in this first vol- ume of the biography, which concludes with Napoleon's victory at Austerlitz, and with his sending 45 captured enemy stan- dards to the Archbishop of Paris so that he could display them in the cathedral of Notre Dame.

The treatment of the coup d'etat gives us another example of Asprey's avoidance of the unreliable anecdote. He describes how Napoleon is given a hostile reception by the deputies who make up the Council of the Five Hundred meeting in the château of Saint Cloud. His speech is a complete failure and he is harassed and assaulted. One legend has it that the nervous Napoleon scratches his face and causes a pimple or boil to bleed. Word passes to the soldiers outside that the general has been attacked and is wounded. Therefore they charge into the château and the deputies flee. But in reality, as is pointed out, it was Lucien Bonaparte and the former priest Sieyes who played the vital role in persuad- ing the soldiers to intervene. A few hours `Yes, cats are vet), territorial.' later, the remnants of the Council of the Five Hundred, with its fellow Council of the Ancients, accepted a new government with Napoleon and two others being the Consuls who were in charge of the country.

The author draws heavily on Napoleon's correspondence and on the memories of those who were close to him, such as Bour- rienne. He also shows a preference for those authorities who wrote their books some time ago, such as Jung, Holland Rose and Madelin. A revealing statement is made about 'one modern historian' who has commented favourably about the 'idiot- ic plan' which was put forward at Austerlitz by the Austrian commander, General Wey- rother. The 'modern historian' is not named, but by implication he is associated with the Austrian's presuming that Napoleon was a fool. 'Which he decidedly was not,' says Asprey.

The author is an expert on military histo- ry and it is not surprising that he should devote much space to the expeditions and battles. The conquest of Egypt is carefully studied, and it is clear that he has not much sympathy with the argument that it was a trick organised by the government to get rid of a troublesome young general (a theo- ry that is believed by Jean Tulard, one of the leading French historians of Napoleon, whose works do not figure in the bibliogra- phy). Asprey shows that the idea of this invasion had been considered during the reign of Louis XIV and later, in 1769. It was being advocated by Talleyrand and for many it held out prospects of acquiring wealth and increasing trade. But for Napoleon it also came as a means of con- tinuing the war against England at a time when he had been forced to acknowledge that an invasion of England could not be contemplated without France having achieved mastery of the seas, which was only a distant possibility. There was also Napoleon's enthusiasm for the scientific and historical investigations that were to be an important part of his mission. To this Asprey sagely adds that there were those in Paris who welcomed the prospect of this `immensely popular and thus dangerous young general' disappearing to a distant country.

Asprey makes no attempt to understand the French Revolution, which he describes in successive paragraphs as 'inane' and `insane'. Writing of the situation in Octo- ber 1789, he observes that revolutionary France had already succumbed to an evil as great as that of feudal oppression — 'the rule of the extreme Left'. But he follows Napoleon's actions closely and carefully and there is much to hold the reader's attention in this volume and one looks for- ward to its successor. It has been said that the biographies of Napoleon are so numer- ous that it is as if one has been produced on every single day that has passed since his death on 5 May 1821. Mr Asprey's must hold a respectable place in this legendary empire.