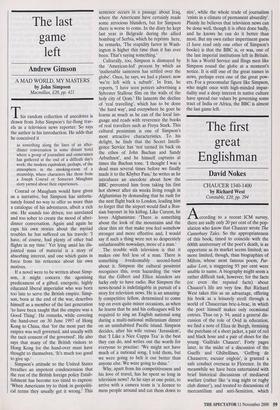 A MAD WORLD, MY MASTERS by John Simpson Macmillan, £20, pp. 421 This random collection of anecdotes is drawn from John Simpson's far-flung trav- els as a television news reporter. So says the author in his introduction. He adds that he conceived it

as something along the lines of an after- dinner conversation in some distant hotel where a group of journalists and cameramen has gathered at the end of a difficult day's work; the modern equivalent, perhaps, of the atmosphere in the smoking-room of a steamship, where characters like those from a Joseph Conrad or Somerset Maugham story yarned about their experiences.

Conrad or Maugham would have given us a narrative, but Simpson has unfortu- nately found no way to offer us more than a catalogue of his adventures, albeit a rich one. He sounds too driven, too unreIaxed and too sober to create the mood of after- dinner conversation. Again and again he caps his own stories about the myriad troubles he has suffered on his travels: 'I have, of course, had plenty of other bad flights in my time.' Yet lying amid his dis- jointed mass of material is a story of absorbing interest, and one which gains in force from his reticence about his own motives.

If a novel were to be written about Simp- son, it might concern the agonising predicament of a gifted, energetic, highly educated liberal imperialist who was born too late to serve the British empire. Simp- son, born at the end of the war, describes himself as a member of the last generation `to have been taught that the empire was a Good Thing'. He remarks, while covering the hand-over on 30 June 1997 of Hong Kong to China, that 'for the most part the empire was well governed, and usually with the tacit consent of the governed'. He also says that many of the British visitors to Hong Kong for the hand-over must have thought to themselves, 'It's much too good to give up.'

Simpson's attitude to the United States breathes an impotent condescension that the rest of the British foreign policy Estab- lishment has become too timid to express: `When Americans try to think in geopoliti- cal terms they usually get it wrong.' This sentence occurs in a passage about Iraq, where the Americans have certainly made some atrocious blunders, but for Simpson there is worse to come. In the diary he kept last year in Belgrade during the allied bombing of Serbia, which he reprints here, he remarks, 'The stupidity factor in Wash- ington is higher this time than it has ever been. That's saying something.'

Culturally, too, Simpson is dismayed by the 'American-led' process by which an `inalienable sameness has settled over the globe'. Once, he says, we had a planet: now `we're left with a suburb'. In Iran, he reports, 'I have seen posters advertising a Sylvester Stallone film on the walls of the holy city of Qom.' He laments the decline of 'real travelling', which has to be done `the hard way', and everywhere he goes he learns as much as he can of the local lan- guage and reads with reverence the books of real travellers such as Freya Stark. This cultural pessimism is one of Simpson's most attractive characteristics. To his delight, he finds that the Secret Intelli- gence Service has 'not turned its back on the ethos of John Buchan and Sandy Arbuthnot', and he himself captures at times the Buchan tone. 'I thought I was a dead man several times before we finally made it to the Khyber Pass,' he writes as he introduces an anecdote about how the BBC prevented him from taking his first hot shower after six weeks living rough in Afghanistan by demanding that he rush for the next flight back to London, leading him to forget that the airport would find a Rus- sian bayonet in his kitbag. Like Curzon, he loves Afghanistan: 'There is something about the look of the mountains and the clear thin air that make you feel somehow stronger and more effective and, I would say if such a thing were not so desperately unfashionable nowadays, more of a man.'

The trouble with television is that it makes one feel less of a man. There is something irredeemably second-hand about it. Simpson the cultural pessimist recognises this, even hazarding the view that the Gilbert and Ellice islanders are lucky only to have radio. But Simpson the news-hound is indefatigable in pursuit of a story for television news. He is an amazing- ly competitive fellow, determined to come top on even quite minor occasions, as when he learns that he and his colleagues will be required to sing an English national song during a multi-national millennium dinner on an uninhabited Pacific island. Simpson decides, after his wife vetoes 'Jerusalem', that 'I Like a Nice Cuppa Tea' is the best they can do, and writes out the words for everyone to practise: 'We might not have much of a national song, I told them, but we were going to belt it out better than anyone else. We were going to shine.'

Why, apart from his competitiveness and his love of travel, has he spent so long in television news? As he says at one point, to arrive with a camera team is 'a licence to mess people around and cut them down to size', while the whole trade of journalism `exists in a climate of permanent absurdity'. Plainly he believes that television news can be done well, though it is often done badly, and he knows he can do it better than most. But my own rather impertinent guess (I have read only one other of Simpson's books) is that the BBC is, or was, one of the last imperial institutions left in Britain. It has a World Service and flings men like Simpson round the globe at a moment's notice. It is still one of the great names in news, perhaps even one of the great pow- ers. For a proconsular figure like Simpson, who might once with high-minded impar- tiality and a deep interest in native culture have spread our values by governing some tract of India or Africa, the BBC is almost the last game left.