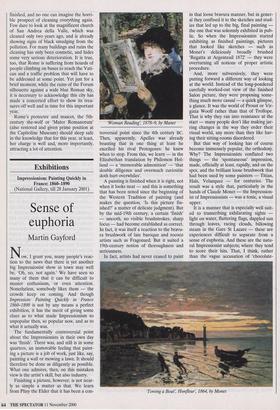 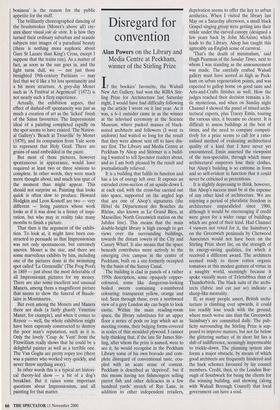 Now, I grant you, many people's reac- tion to the news that there is yet another big Impressionist show in town may well be, 'Oh, no, not again.' We have seen so many of them that it can be difficult to muster enthusiasm, or even attention. Nonetheless, somebody likes them — the crowds keep on coming. And though Impression: Painting Quickly in France 1860-1890 is not by any means a perfect exhibition, it has the merit of giving some clues as to what made Impressionism so unpopular then, so popular now, and as to what it actually was.

The fundamentally controversial point about the Impressionists in their own day was 'finish'. There was, and still is in some quarters, an immovable feeling that paint- ing a picture is a job of work, just like, say, painting a wall or mowing a lawn. it should therefore be done as diligently as possible. What one admires, then, on this mistaken view is the artist's skill, but also industry.

Finishing a picture, however, is not near- ly as simple a matter as that. We learn from Pliny the Elder that it has been a con- `Woman Reading, 1878-9, by Manet troversial point since the 4th century BC. Then, apparently, Apelles was already boasting that in one thing at least he excelled his rival Protogenes: he knew when to stop. From this, we learn — in the Elizabethan translation by Philemon Hol- land — a 'memorable admonition' — 'that double diligence and overmuch curiositie doth hurt overwhiles'.

A painting is finished when it is right, not when it looks neat — and this is something that has been noted since the beginning of the Western Tradition of painting (and makes the question, 'Is this picture fin- ished?' a matter of delicate judgment). But by the mid-19th century, a certain 'finish' — smooth, no visible brushstrokes, sharp focus — had become established as correct. In fact, it was itself a reaction to the bravu- ra brushwork of late baroque and rococo artists such as Fragonard. But it suited a 19th-century notion of thoroughness and seriousness.

In fact, artists had never ceased to paint in that loose bravura manner, but in gener- al they confined it to the sketches and stud- ies that led up to the big, final painting the one that was solemnly exhibited in pub- lic. So when the Impressionists started exhibiting as finished paintings, pictures that looked like sketches — such as Monet's deliciously broadly brushed `Regatta at Argenteuil 1872' — they were overturning all notions of proper artistic procedure.

And, more subversively, they were putting forward a different way of looking at the world. Instead of the long-pondered carefully worked-out view of the finished Salon picture, they were proposing some- thing much more casual — a quick glimpse, a glance. It was the world of Proust or Vir- ginia Woolf rather than that of Trollope. That is why they ran into resistance at the start — many people don't like making jar- ring changes in the way they order their visual world, any more than they like hav- ing their sitting-rooms disordered.

But that way of looking has of course become immensely popular, the orthodoxy. Why? The Impressionists conflated two things — the 'spontaneous' impression, made, officially at least, rapidly, and on the spot, and the brilliant loose brushwork that had been used by some painters — Titian, Hals, Velazquez — for centuries. The result was a style that, particularly in the hands of Claude Monet — the Impression- ist of Impressionists — was a tonic, a visual upper.

It is a manner that is especially well suit- ed to transcribing exhilarating sights light on water, fluttering flags, dappled sun through leaves, racing clouds, billowing steam in the Gare St Lazare — these are experiences difficult to separate from a sense of euphoria. And these are the natu- ral Impressionist subjects; where they tend to score their hits. That, I think, rather than the vague accusation of 'chocolate- 'Towing a Boat', Honfleur; 1864, by Monet boxiness' is the reason for the public appetite for the stuff.

The brilliantly choreographed dancing of the brushstrokes (Monet's above all) cre- ates sheer visual joie de vivre. It is how they turned their ordinary suburban and seaside subjects into images of a paradisial beauty (there is nothing more euphoric about Gare St Lazare than King's Cross, except I suppose that the trains run). As a matter of fact, as soon as the sun goes in, and the light turns dull, we — not just those benighted 19th-century Parisians — may feel that we'd like a bit less spontaneity and a bit more structure. A grey-day Monet such as 'A Festival at Argenteuil' (1872) is not nearly such a fizzy experience.

Actually, the exhibition argues, that effect of dashed-off spontaneity was just as much a creation of art as the 'licked' finish of the Salon favourites. The Impressionist ideal of a painting completed rapidly on the spot seems to have existed. The Nation- al Gallery's 'Beach at Trouville' by Monet (1870), and its companion from Yale seem to represent that Holy Grail. There are grains of sand embedded in the paint.

But most of these pictures, however spontaneous in appearance, would have required at least two or three sessions to complete. In other words, they were much more thought about, and much less spur of the moment than might appear. This should not surprise us. Painting that looks quick is often slow to produce. Howard Hodgkin and Leon Kossoff are two — very different — living painters whose work looks as if it was done in a frenzy of inspi- ration, but who may in reality take many months to finish a picture.

That then is the argument of the exhibi- tion. To look at, it might have been con- structed to persuade us that Impressionism was not only spontaneous, but extremely uneven. Monet is the star, and there are some marvellous exhibits by him, including one of the pictures done at the swimming spot called 'La Grenouille' (The Frog Pool) in 1869 — just about the most delectable of all Impressionist pictures for my money. There are also some excellent and unusual Manets, among them a magnificent picture that seems to show the funeral of Baude- laire in Montmartre.

But even among the Monets and Manets there are duds (a fairly ghastly Venetian Manet, for example), and when it comes to Renoir — well, the whole exhibition might have been expressly constructed to destroy the poor man's reputation, such as it is. Only the lovely 'Coup de Vent' from the Fitzwilliam really shows that he could be a delightful painter as well as a terrible one. The Van Goghs are pretty ropey too (there was a painter who worked very quickly, and never threw anything away).

In other words this is a typical art histori- cal theory-led show — a bit of a dog's breakfast. But it raises some important questions about Impressionism, and all painting for that matter.