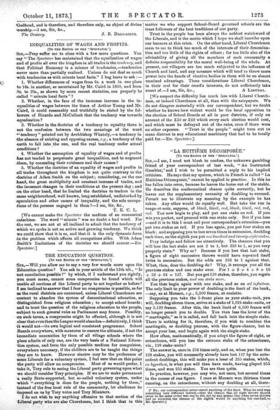 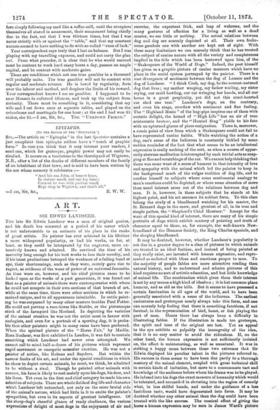 [To THE EDITOR OF THE "SPECTATOR."] S1R,—I am, I need not blush to confess, the unknown gambling friend of your correspondent of last week, " An Instructed Gambler," and I wish to be permitted a reply to his implied criticism. He says that my system, which in French is called " La Huitieme D6composee," cannot be applied in practice. In this he has fallen into error, because he leaves the horse out of the stable. He describes the mathematical chance quite correctly, but he leaves out the supplementary necessity of doubling to succeed. Permit me to illustrate my meaning by the example he has taken. Any other would do equally well. But take the run in rouge-et-noir, suppose, of black, black, red, black, black, red, red, rcd. You now begin to play, and put one stake on red. If you win you pocket, and proceed with one stake only. But if you lose —and it is to this I must call your correspondent's attention—you put two stakes on red. If you lose again, you put four stakes on black; and supposing you to lose seven times in succession, doubling each time, on the eighth you put one hundred and twenty-eight stakes.

Pray indulge and follow me attentively. The chances that you will lose the last stake are not 2 to 1, but 256 to 1, as you very properly state.• Why so? Because if you lost that last stake, a figure of eight successive throws would have repeated itself twice in succession. But the odds are 256 to 1 against that. What, then, does the doubling do? Why, it recoups you all the previous stakes and one stake over. For 1 + 2 + 4 + 8 -I- 16 + 32 + 64 = 127. But you get 128 stakes, therefore, you regain all the previous stakes, and one stake more.

You then begin again with one stake, and so on ad infinitum. The only limit to your power of doubling is the limit of the bank, —say, as at Monaco, e.g., 6,500 francs, at roulette.

Supposing you take the 5-franc piece as your stake-unit, you will, doubling eleven times, arrive at a stake of 1,024 stake-units, or say 5,120 francs. After this, the bank limit of 6,500 francs will no longer permit you to double. You then lose the lever of the " martingale," as it is called, and fall back into the simple stake. There is nothing for it, therefore, if you wish to combine the martingale, or doubling process, with the figure-chance, but to accept your loss, and begin again with the single stake.

How often, mathematically, if you adopt the figure of eight, or octoscheme, will you lose the extreme stake of the octoscheme, viz., 128 stake-units?

The answer is, once in 256 times only, and as, when you lose the 128 stakes, you will necessarily already have lost 127 by the ante- cedent doublings, this will make you a loser of 255 stakes, which, ex hypothesi, is what you will then have made, having played 255 times, and won 255 stakes. You are then quits.

In practice, however, you may win, not once, but several times in the course of one figure. I once at Monaco won thirteen times running, on the octoscheme, without any doubling at all, tbere-

r No; our correspondent never elated anything of the kind. What he said was something very different indeed,—that the chance that all eight throws should occur in the same order was one in 256, not by any means that when seven throws had so occurred, the chance of the eighth would be anything but one-halt.- ED. Spectator.]

fore simply following my card like a coffee-mill, until the croupiers themselves all stared in amazement, their amazement being chiefly due to the fact, not that I won thirteen times, but that I was never strictly with or against the " table," and that my constant success seemed to have nothing to do with so-called " runs of luck."

Your correspondent says truly that I lost on balance. But I was playing with my travelling expenses, and could not carry the plan out. From what precedes, it is clear that be who would succeed must be content to work hard many hours a day, possess an ample capital, and be content with moderate gains.

These are conditions which not one true gambler in a thousand will probably unite. The true gambler will not be content with regular and moderate returns. He is bored by regularity, frets over the labour and method, and despises the limits of his reward. Your correspondent knows I am no gambler. I happened to be near Monaco in enforced idleness, and took up the subject from curiosity. There must be something in it, considering that my wife and I sat down once at separate tables, and played on the octoscheme and martingale for one hour ; at the end I had won 83 stakes, she 84.—I am, Sir, &c., TEE " UNKNOWN FRIEND."