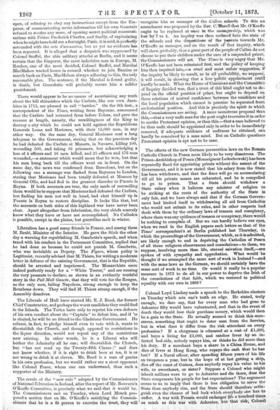 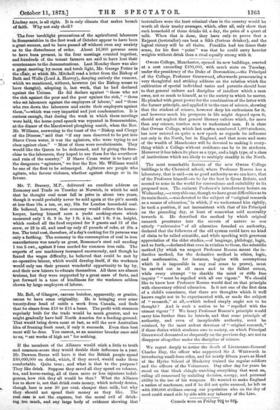 Page 2, 11 October 1873 — Colonel Loyd Lindsay made a speech to the Berkshire electors .
Close

Colonel Loyd Lindsay made a speech to the Berkshire electors .

on Tuesday which sets one's teeth on edge. He stated, truly enough, we dare say, that for every man who had gone to Ashantee fifty would have volunteered, and that in the event of death they would lose their purchase money, which would then be a gain to the State. He actually seemed to think this mon- strous, something that ought to deter men from the Service, but in what does it differ from the risk attendant on every profession? If a clergyman is educated at a cost of £1,200, and buys a living for £8,000, and catches fever by an in- fected bed-side, nobody repays him, or thinks he did more than his duty. If a merchant buys a share in a China House, and dies of fever at Hong Kong, who repays the cash that he has lost? If a Naval officer, after spending fifteen years of his life on twopence a year, but in the hope of at last getting a ship, dies off the coast of Guinea, does anybody repay his value to his wife, or sweetheart, or sister P Suppose a Colonel who might inherit millions were to go to Ashantee and die there, does the State compensate his people for lost expectations? The argument seems to us to imply that there is less obligation to serve the State than anybody else, and the State should therefore extin- guish even the chance of bad luck which everybody ale has to suffer. A war with Prussia would endanger life a hundred times as much as this war with Ashantee, but that risk, Colonel Lindsay says, is all right. It is only climate, that makes breach of faith. Why not:only shell?