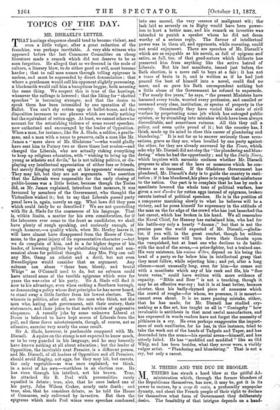 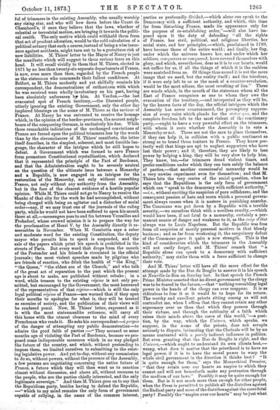 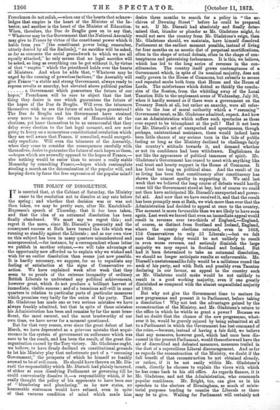 TRIERS has struck a hard blow at the pitiful Ad- .111. ministration which, through the former blunders of the Republicans themselves, has now, it maybe, got it in its power to restore, by a coup de main, a profoundly unpopular dynasty, and cheat the French people of their right to declare for themselves what form of Government they deliberately desire. The feasibility of that intrigue depends on a hand-

the proclamation of Henri V. by the Assembly directly it re- always was to Louis Napoleon. But the Republic was free assembles in November. When M. Gambetta says a sober from all suspicion of merely personal motives in that bloody

and moderate word for the existing Constitution, the deputy business ; and so far from weakening it, the sanguinary defeat mayor who permits him to speak is suspended, and the of the Commune gave it quite a new strength. This is the sale of the papers which print his speech is prohibited in the kind of consideration which the trimmers in the Assembly streets of Paris. But every word that drops from the mouth will not easily forget, and M. Thiers' remark that " a of the Pretender and his friends is circulated in the official Republic alone can speak to a democracy with sufficient journals ; the most violent speeches made by pilgrims who authority," may strike them with a force sufficient to change are friends of reaction, who drink the health of " the King," their vote.

"the Queen," "the eldest son of the Church," and who talk And M. Thiers' letter will have all the more effect for the of the great act of reparation to the past which the present attempt made by the Due de Broglie to answer it in his speech age is about to make, are published without rebuke ; in a at Neuville-le-Bon on Sunday last. In that speech the French

word, while treason to the existing regime is not only per- Prime Minister asserted that no direct government by the clergy witted, but encouraged by the Government, the most honoured was to be feared in the future,—that "nothing resembling legal

of the representatives of that regime—which is still the only power in the hands of the clergy can ever reappear. It is as

legal political regime of France—are warned that if they open ridiculous to fear it as it would be to hope for its return. their mouths to apologise for what is, they will be treated The worthy and excellent priests sitting among us will not

as enemies of society, and the publication of their views will contradict me, when I affirm that they cannot retain any other be rendered penal. Now, M. Thiers' letter, expressed as it supremacy over us than that which they possess through is with the most statesmanlike reticence, will carry all their virtues, and through the sublimity of a faith which this home with the utmost clearness to the mind of every raises their minds above the cares of this world,"—a posi-

Frenchman who reads it. He asks his correspondent--apropos tion, by the way, which the Univers, which speaks, we of the danger of attempting any public demonstration—to suppose, in the name of the priests, does not scruple admire the good faith of parties :—"They accused us some seriously to dispute, intimating that the Clericals will be by no months ago of violating the Peet of Bordeaux, because we pro- means contented with a purely indirect influence in politics. posed some indispensable measures which in no way pledged But even granting that the Duc de Broglie is right, and the the future of the country, and which, without pretending to Univers,—which ought to understand its own clients best,— impose them, we limited ourselves to submitting to the exist- wrong, what does it matter that the priesthood is to have no ing legislative power. And yet to-day, without any commission legal power, if it is to have the moral power to warp the to do so, without powers, without the presence of the Assembly, whole civil government in the direction it thinks best ? " It a few persons are negotiating concerning the entire future of is quite enough for them," says the Monarchical Premier,

France, a future which they will then want ns to sanction "that they retain over our hearts an empire to which they almost without discussion, and above all, without recourse,to cannot and will not henceforth make any pretension through the people, who are the parties chiefly interested, and the only the medium of our laws." Possibly it may be quite enough for legitimate sovereign." And then M. Thiers goes on to say that them. But is it not much more than enough for other people, the Republican party, besides having to defend the Republic, when the Press is permitted to publish all the diatribes against

—" which to my mind remains the only form of government the Radical party and none of the diatribes against the sacerdotal capable of rallying, in the name of the common interest, party ? Possibly the "empire over our hearts" may be just what

parties so profoundly divided,—which alone can speak to the Democracy with a sufficient authority, and which, this time far from disturbing France, made its appearance only for

Frenchmen do not relish,—when one of the hearts that acknow- ledges that empire is the heart of the Minister of the In- terior, and another is the heart of the Minister of Education. When, therefore, the Duc de Broglie goes on to say that, " Whatever may be the Government that the National Assembly may give to France by virtue of the constituent power which it holds from you " [the constituent power being, remember, utterly denied by all the Radicals], " no sacrifice will be asked, so far as concerns the social groundwork to which we are all equally attached," he only means that no legal sacrifice will be asked, so long as everything can be got without it, by virtue of that empire " which the priesthood holds over the hearts of Ministers. And when he adds that, " Whatever may be urged by the cunning of powerless factions," the Assembly will give France " a stable and strong Government, always ready to repress revolts or anarchy, but elevated above political parties a Government which guarantees the future of our hopes," Frenchmen will be sure to object that the last thing they desire is one which guarantees the future of the hopes of the Due de Broglie. Will even the trimmers themselves wish to see the future of such hopes guaranteed ? The Due de Broglie and his Government have strained every nerve to secure the return of Monarchists at the elections, yet know themselves to be so unsuccessful that they delay every election to the last legal moment, and are now going to hurry on a momentous constitutional revolution which they are well aware that France, if consulted, would energeti- cally repudiate. Will even the trimmers of the Assembly, when they come to consider the consequences carefully with themselves, desire to guarantee the future of such hopes as these, —hopes which are avowedly opposed to the hopes of France,— else nothing would be easier than to secure a really stable Monarchy by consulting France,—hopes which contemplate stealing a march on the determination of the popular will, and keeping down by force the free expression of the popular mind?