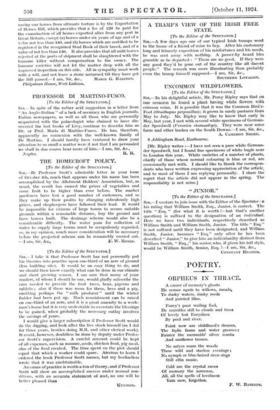 PROFESSOR DI MARTINO-FUSCO. [To the Editor of the SPECTATOR.]

SIR,—In spite of the rather acid suggestion in a. letter from "An Anglo-Italian " of a lack of accuracy in English journals, Italian newspapers, as well as all those who are personally acquainted with the palaeologist who claimed to have dis- covered the lost books of Livy, continue to describe him as Dr. or Prof. Mario di Martino-Fusco. He has, therefore, apparently no connexion with the well-known family of De Martino. I should hardly have ventured to draw your attention to so small a matter were it not that I am persuaded we shall in due course hear more of him.—I am, Sir, &c.,