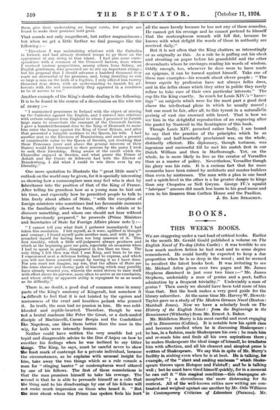 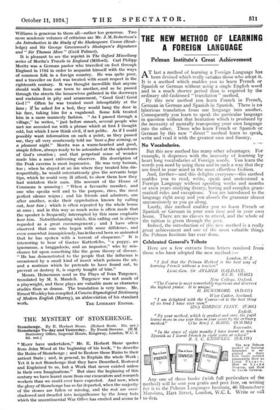 WE are staggering under a vast load of critical books. Earlier in the month Mr. Gerald Gould published a volume on The English Novel of To-day (John Castle) : it was terrible to see how much modern fiction he had read and to some degree remembered. He could hardly be expected to keep a due proportion when he is so deep in the wood ; and he seemed to recollect the latest books best. It was irritating to see Mr. Michael Arlen given over two pages and Mr. James Stephens dismissed in just over two lines :—" Mr. James Stephens, undeniably a man of genius and a poet, baffles admiration by a frequent triviality." Undeniably a man of genius ? Then surely we should have been told more of him than that. But the book makes a very good guide for the library subscriber. At the same time Mr. Harvey W. Hewett- Taylor gave us a study of The Modern German Novel (Boston : Marshall Jones). Now we have a scholarly book on The History of the English Novel : from the Beginnings to the Renaissance (Witherby) from Mr. Ernest A. Baker.

Mr. Middleton Murry is his most careful and most engaging self in Discoveries (Collins). It is notable haw his spirit rises and becomes rarefied when he is discussing Shakespeare : he has, in a fashion, made Shakespeare his own ; he reads him and re-reads him and finds all his own aspirations there; he makes Shakespeare the ideal image of-himself, he irradiates him with affection, and all his cleanest and simplest prose is written of Shakespeare. We say this in spite of Mr. Murry's facility in sinking even when he is at best. He is talking, Sair example, of the "slant and smiling sunbeam" which Shake- speare throws upon Hotspur and Falstaff ; and he is talking well ; but he must have tired himself quickly, for in a moment he can call it "this magical condition—this champagne at- mosphere " ; a slovenliness the' more distressing for its context. All of the well-known critics now writing are con- trasted and weighed against one another by Mr. Orb o Williams in Contemporary Criticism of Literature (Parsons). Mr. Williams is generous to them all—rather too generous. Two more academic volumes of criticism are Mr. J. M. Robertson's An Introduction to the Study of the Shakespeare Canon (Rout- ledge) and Sir George Greenwood's Shakspere's Signatures and "Sir Thomas More" (Cecil Palmer).

It is pleasant to see the reprint in The Oxford Miscellany series of Moritz's Travels in England (Milford). Carl Philipp Moritz was a German pastor who travelled on foot through England in 1782 in order to acquaint himself with the ways of common folk in a foreign country. He was quite poor, and a traveller on foot was treated with scant respect in the eighteenth century. It was thought incredible that anyone should walk from one town to another, and as he passed through the streets the housewives gathered in the doorways and exclaimed in pity and amazement, "Good God! Good God!" Often he was treated most inhospitably at the inns ; if he asked for a bed, they would bang the door in his face, taking him for a vagabond. Some folk treated him in a more mannerly fashion. "As I passed through a village," he writes, "just before sunset, several people who met me accosted me with a phrase which at first I thought odd, but which I now think civil, if not polite. As if I could possibly want information on such a point, as they passed me, they all very courteously told me 'twas a fine evening, or a pleasant night." Moritz was a warm-hearted and good, simple fellow, always ready to be astonished at the splendours of God's creation ; and that perpetual sense of wonder made him a most enlivening observer. His description of the Peak caverns is most impressive. He was very human, too ; when he stayed at an inn where they treated him dis- respectfully, he would ostentatiously give the servants large tips, which he could very ill afford, to show them how they had mistaken their man. His account of the House of Commons is amusing : "When a favourite member, and one who speaks well and to the purpose, rises, the most perfect silence reigns ; and his friends and admirers, one after another, make their approbation known by calling out, hear him ; which is often repeated by the whole house at once ; and in this way so much noise is often made that the speaker is frequently interrupted by this same emphatic hear him. Notwithstanding which, this calling out is always regarded as a great encouragement ; and I have often observed that one who began with some diffidence, and even somewhat inauspiciously, has in the.end been so animated that he has spoken with a torrent of eloquence." It is interesting to hear of Gustav Katterfelto, "a puppy, an ignoramus, a braggadocio, and an impostor," who by mis- chance hit upon something like the germ theory of disease. "He has demonstrated to the people that the influenza is occasioned by a small kind of insect which poisons the air, and a nostrum which he pretends to have found out, to prevent or destroy it, is eagerly bought of him."

Messrs. Heinemann send us the Plays of Ivan Turgenev, translated by M. S. Mandell. Turgenev was not much of a playwright, and these plays are valuable more as character studies than as drama. The translation is very lame. Mr. Ernest Weekley has compiled A Concise Etymological Dictionary of Modern English (Murray), an abbreviation of his standard