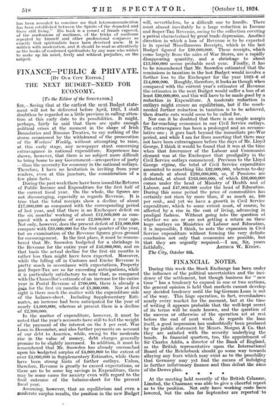 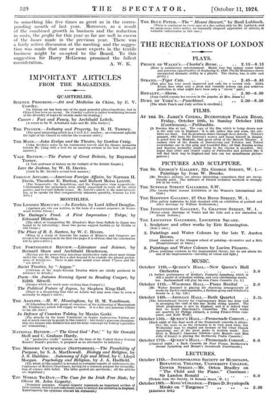 During this week the Stock Exchange has been under the influence of the political uncertainties and the inci- dence of the settlement, but though business for "new time" has a tendency to expand in one or two sections, the general opinion is held that markets cannot develop any decided tendency until the big German Loan is out of the way. This huge operation, in fact, 'overshadows nearly every market for the moment, but at the time of writing it appears probable that the well-kept secret of its terms will be made known, and the question of the success or otherwise of the operation set at rest before the end of next week. As regards the loan itself, a good impression has undoubtedly been produced by the public statement by Messrs. Morgan & Co. that they are satisfied with the security underlying the bonds. In financial quarters, too, the appointment of Sir Charles Addis, a director of the Bank of England, as the British representative upon the International Board of the Reichsbank should go some way towards allaying any fears which may exist as to the possibility that Germany may yet find the means of indulging in further inflationary finance and thus defeat the aims of the Dawes plan. * * At. the meeting held recently of the British Celanese, Limited, the Chairman was able to give a cheerful report as to the position. Not only have working costs been lowered, but the sales for September are reported • to be something like five times as great as in the corres- ponding month of last year. Moreover, as a result of the combined growth in business and the reduction in costs, the profits for this year so far are well in excess of the losses made in the previous year. There was a fairly active discussion at the meeting. and ,the sugges- tion was made that one or more experts in the textile business might be co-opted to the Board. To this suggestion Sir Harry McGowan promised the fullest