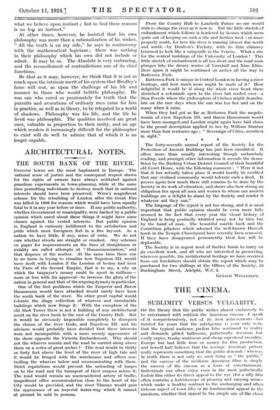 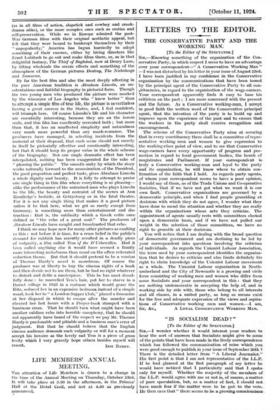 ON the theory that the public wishes almost exclusively to be entertained with rubbish the American cinema—I speak of it comprehensively, not of its best achievements—has insisted for years that the catchpenny is your only coin, that the typical audience prefers false sentiment to reality and demands gilded ballrooms, pathetically decorous but costly orgies, trashy sentiment and cheap superficial morality. Europe has had little time or money for film production, and _herself half. believes that the average American picture really represents something that the public demands : whereas in truth there is not only no such thing as "the public," and the success of the mediocre American films is simply the success of the cinema as a form of entertainment. Individuals can often enjoy even in the most pathetically foolish ffim either its direct appeal to the eye (for a silly film often contains a kaleidoscope of pleasing and varying scenes which make a healthy contrast to the unchanging and often hideous aspect of town life) or its fundamental appeal to the emotions, whether that appeal be the simple one of the chase (as in all films of action, slapstick and cowboy and crook- drama alike), or the more complex ones such as erotics and self-preservation. While we in Europe admired the post- War German films with their original aesthetic appeal, but felt that they were bound to bankrupt themselves by their "unpopularity," America has begun. hurriedly to adopt something of their essence, either by hiring directors like Ernst Lubitsch to go out and make films there, or, as in that delightful fantasy, The Thief of Baghdad, now at Drury Lane, by lifting wholesale the scenic effects and something of the atmosphere of the German pictures Destiny, The Niebelungs and Sumurun.

By far the best film and also the most deeply affecting in the pure American tradition is Abraham Lincoln, an un- ostentatious and faithful biography in pictorial form. Though the two young men who produced the picture were mocked by the wiseacres of Los Angeles who "knew better" than to attempt a simple film of true life, the picture is nevertheless having a great success in the States, and, I feel confident, will triumph here. Of course Lincoln's life and. his character are essentially interesting, because they are on the heroic scale, and this film has excellently recreated both ; but more than that, it has an unaffected simplicity and naturalness very much more powerful than any mock-romance. The producers have managed, in selecting incidents from the material at their disposal, that each scene should not merely in itself be pictorially effective and emotionally interesting, but that it should keep its proper value in the whole scheme of the biography. Not. one single dramatic effect has been interpolated, nothing has been exaggerated for the sake of "pleasing the public." The smooth unity by which the story works naturally forward to the assassination of the President, the good proportion and perfect taste, gives Abraham Lincoln a whole dignity and beauty. It is folly to attempt to praise one single thing in this film where everything is so pleasing— alike the performance of the untrained man who plays Lincoln to the life, the beauty and restraint of the scenes at Ann Routledge's bedside, at Gettysburg or in the fatal theatre. For it is not any- single thing that makes it a good picture unless it be that here, what we get so rarely except from Germany, is something more than entertainment and dis- traction: that is, the sublimity which a Greek critic once defined as "the echo of a great soul." The producers of Abraham Lincoln have caught and broadcasted that echo.

I think we may hope now for many other pictures as exalting as this : not before it is time, for a crass belief in the public's demand for rubbish has recently- resulted in a deadly piece of vulgarity, a film called Tess of the D'Urbervilles. Had it been called anything else it would have seemed a faintly more interesting melodrama than usual on the often reiterated seduction theme. But that it should pretend to be a version of Thomas Hardy's novel is monstrous. Of course the producer was at liberty to buy the cinema rights of a book and then decide not to use them, but he had no right-whatever to distort and defile a masterpiece. This he has most dread- fully done : he marcelled Tess's hair, put her to starve in a Dorset village in 1923 in a costume which would grace the Ritz, seduced her in an expensive bedroom instead of a simple wood, took her to" a London Supper Club," placed a limousine at her. disposal in which to escape after the murder and cheered her last hours with a Prayer-book stamped with a luminous cross. That he should turn what might have been another sublime echo into horrible cacophony, that he should not apparently have heard of the respect we pay Mr. Thomas. Hardy is pardonable and pitiable and a business man's error of judgment. But that he should believe that the English cinema audience demands such vulgarity or will for a moment accept his heroine as the lovely sad Tess is a piece of gross levity which I very gravely hope others besides myself will