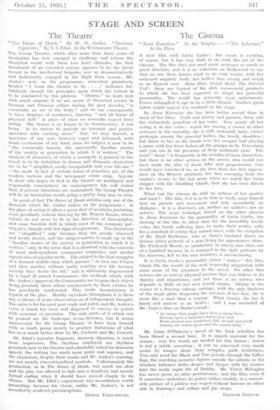 "Anna Karenina." At the Empire.—" The Informer." At the Plaza

A NEW film with Greta Garbo : the event is exciting,

of course, but it has very little to do with the art of the cinema'. The film does not need great actresses so much as great directors, and it is no reflection on Hollywood to say that no one there knows what to do with Garbo, with her awkward ungainly body, her hollow face strong and rough

as an Epstein cast. Matz Hari, Grand Hotel, The Painted Veil : these arc typical of the slick commercial products to which she has been expected to adapt her powerful personality. The result has generally been unfortunate. Power misapplied is apt to be a little absurd. Garbo's great talent might appear less confined on the stage.

In Anna Karenina she has been better served than in most of her films. Guilt and misery and passion, these suit the melancholy grandeur of her voice. Very nearly all her acting is in her voice : watch her among a crowd of other actresses in the mazurka, she is stiff, awkward, bony, rather

grotesque among the graceful bodies, the lovely shoulders ; but listen to her as she bends over her croquet ball playing

a game with her lover before all the gossips in St. Petersburg and you are in the presence of deep authentic pain. The word " doom " is frequently in the mouths of these characters, but there is no other actress on the screen who would not have made the idea of doom false and preposterous, who would have convinced us, as she does from her first appear- ance on the Moscow platform, her face emerging from the engine's steam, to the last scene when we watch her brain stagger with the thudding wheels, that she has been driven to her fate.

What can the cinema do with an actress of her quality and kind ? The film, if it is to be true to itself, must depend first on picture and movement and only secondarily on dialogue : it is a director's art, neither an author's nor an

actor's. The stage technique forced on the other players in Anna Karenina by the personality of Greta Garbo, the

slowing of the film to allow time for the incredibly lovely voice, the harsh suffering face, to make their points, calls for a standard of acting they cannot meet, with the exception of Mr. Basil Rathbone, who as Anna's husband draws an intense bitter portrait of a man living for appearances alone. Mr. Frederick March, so satisfactory in ninety-nine films Out of a hundred because he is arranged in the right patterns by his directors, left to his own resources is unconvincing.

It is Greta Garbo's personality which " makes " this film, which fills the mould of the neat respectful adaptation with some sense of the greatness in the novel. No other film actress can so convey physical passion that you believe in its dignity and importance, and yet there is no actress who depends so little on her own sexual charm. Sitting in the corner of a freezing railway carriage, with the ugly shadows of the single globe deepening the crevices of her face, she is more like a man than a woman. What beauty she has is harsh and austere as an Arab's ; and I was reminded of Mr. Yeats's' lines on Dante's mask :

" An image that might have boon a stony face, Staring upon a bedouin's horse-hair roof From doorod and windowed cliff, or half upturned Ainong the coarse grass and the camel dung."

. Mr. Liam O'Flaherty's novel of the Irish rebellion has been filmed a second time. It is superb material for the screen ; very few words are needed for this drama ; terror

is not a subtle sensation ; it. can be conveyed very much easier by images alone than scruples, guilt, tenderness.

You only need the Black and Tan patrols through the Liffey fogs, the watching secretive figures outside the saloons as the drunken informer drifts deeper and deeper with his cronies into the seedy ' night life of Dublin. Mr. Victor MeLaglen has never given an 'abler performance, and the film, even if it sometimes underlines its points rather crudely, is a memor- able picture of a pitiless war waged without honour on either side in doorways and cellars and gin shops.